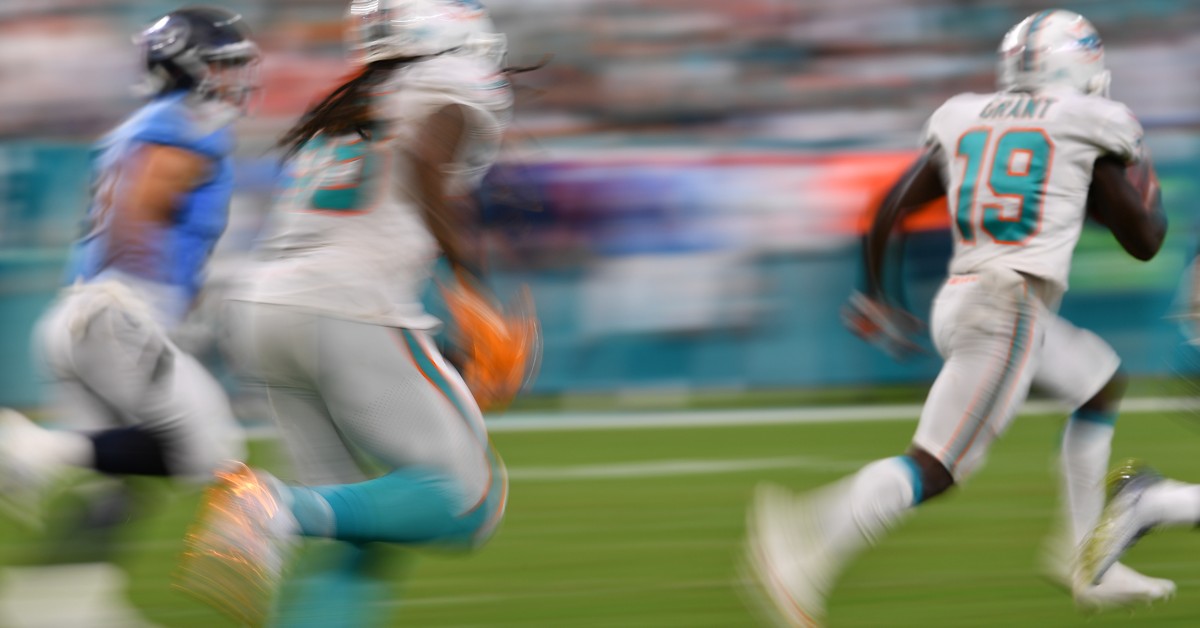 Save for Cordarrelle Patterson’s two-year stint in Chicago, the Bears’ return game has left us wanting more. Maybe we feel this way as Bears fans because they have been spoiling us from a special teams standpoint. Let’s face it. Between Devin Hester, Jerry Azumah, Danieal Manning, Glyn Milburn, and Patterson, my generation of Bears fans have been lucky to see some great ones. So when the return game isn’t up to par, it stands out.

Perhaps, with that in mind, the Bears sent a future draft consideration to the Dolphins for Jakeem Grant. Or maybe the team knows it needs to be better on the margins. And one area for potential improvement is in special teams. So let’s get to know the newest new guy.

OK, now I understand where the “Mighty Mouse” moniker comes from regarding Grant’s nickname above.

Accomplishments: Had the NFL’s longest kick return touchdown in 2018 at 102 yards:

Props are in order for the “dreaded trio” of Senorise Perry, Brandon Bolden and Walt Aikens for creating the creases Jakeem Grant needed to run this kickoff back 102 yards for a touchdown. Yes, that’s their new name….for obvious reasons. pic.twitter.com/GNR3fDOctB

Now the Dolphins get a punt return TD! Jakeem Grant to the house. pic.twitter.com/RtnySFtRKX

Someone Get the New Guy a History Book

New #Bears returner Jakeem Grant on what he knew about Chicago before the trade? “Nothing besides Devin Hester.”

Stay what you want, I appreciate the honesty.

Back in 2019, Grant told the South Florida Sun Sentine’s Safid Deen that he desires to emulate the all-time greats:

“I remember watching, I think it was the Super Bowl when Devin Hester ran it back. I just said, I’m going to do that. I got to the league and I never played punt return ever in my life. But I always watched Devin Hester and Dante Hall do it, and it’s a lot harder doing it than watching them do it. When I got out there, I had a few hiccups. Then next thing you know, I started getting good at it.”

If you’re going to shoot, remind yourself to aim for the moon. Because if you miss, it’s OK because you’ll land among the stars.

At first, it was a struggle to understand why the Bears would send future draft capital to the Dolphins for a kick returner. But sitting down and thinking about it for an extended period helps make sense of things. At least on some level.

Firstly, the Bears defense is good. So, when your defense is solid, it can help in winning the field position battle. So can a good return ace. Teaming the two should put Justin Fields in a better position to be successful. Working on short fields after defensive stops and strong returns could do wonders for this offense (and the rookie leading the group). And at the cost of a future pick that might not convey until 2023, this shouldn’t be a deal-breaker.

On the other hand, that Chicago felt it was necessary to make such a move suggests the Bears don’t think Tarik Cohen will be back any time soon. In 2018, Cohen was a first-team All-Pro returner. And before suffering a season-ending ACL injury, Cohen was positioning himself for a bounce back season. Unfortunately, the injury cut his season short and he hasn’t been able to get back on the playing field. So it makes sense to go after a return specialist with Cohen out. No need to rush back a player who signed a multi-year extension last year.

Grant figures to fill in the return specialist role in Cohen’s absence. But I’m also here for using Grant in a gadget capacity:

Jakeem Grant looks like he was shot out of a cannon as he broke 3 tackles for a touchdown on the screen. pic.twitter.com/86kgtLZGuO

Then again, maybe the offense should nail down the basics before getting too tricky.