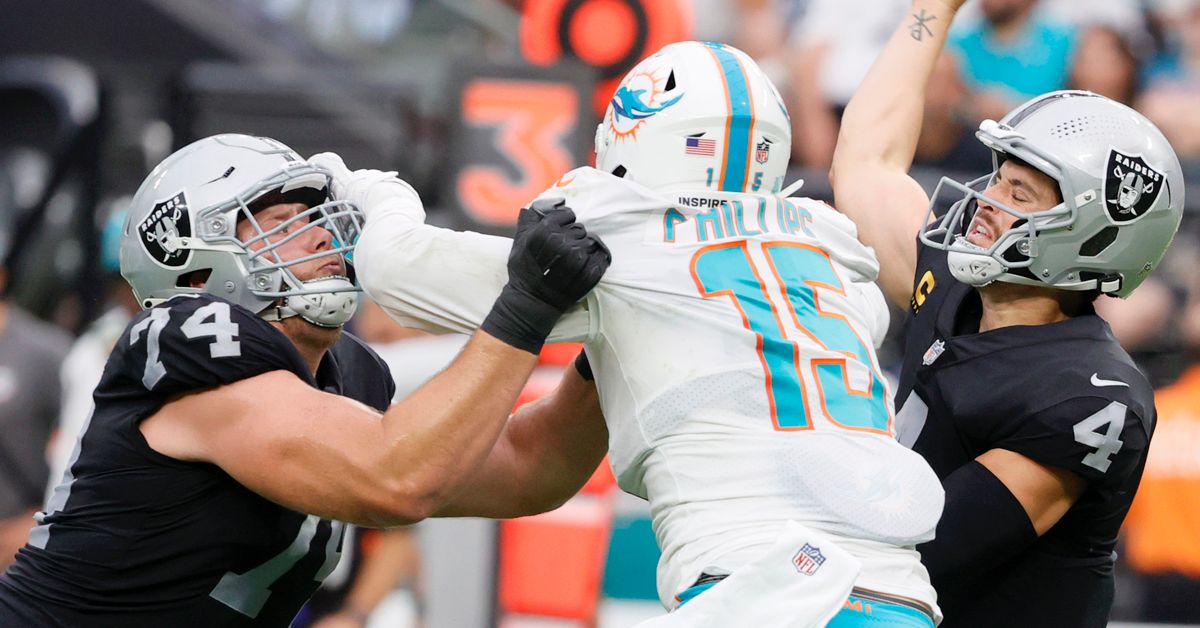 It’s been rough up front for the Las Vegas Raiders.

Sure, they’re 3-1. And a winning record in the NFL should never be taken for granted — even if we’re only four games into the season. But the winning has taken a toll on quarterback Derek Carr’s body. Through four games, Carr has taken 12 sacks and 28 quarterback hits. All of that piles up over the course of the football year. So, perhaps with that in mind, the Raiders are shuffling their line:

Alex Leatherwood is working at right guard today for the #Raiders. Brandon Parker is at right tackle.

The Athletic’s Tashan Reed reports Vegas’ football team was a working out 2021 first-round pick Alex Leatherwood at right guard during Thursday’s practice. Sliding into the right tackle spot Leatherwood was previously occupying was Brandon Parker. All in all, it’s a notable change for the five guys up front. Particularly for Leatherwood.

Leatherwood was the Raiders’ first-round pick, going 17th overall. Even though he was a standout contributor at Alabama, pre-draft projections had the Crimson Tide product as a Day 2 pick. Nevertheless, GM Mike Mayock chose Leatherwood with a first-round selection. But to this point, has not played to his draft status. Leatherwood’s 31.1 grande is the worst among offensive tackles. Not just rookies. And not just tackles. All offensive tackles. That unsightly 31.1 overall grade and 28.1 pass-blocking grade will make him a target, even with the move inside.

Vegas debuting a new right side of the offensive line is an admission that things weren’t working out up front before. Not that we were in need of such confirmation. After all, 12 sacks and 28 QB Hits tells the story for us. And after watching Jon Gruden’s gang go all out to make sure Khalil Mack couldn’t beat them in 2019, it should come as no surprise that his squad is making moves again with QB protection in mind. Even if these types of moves are like rearranging the deck chairs on the Titanic.