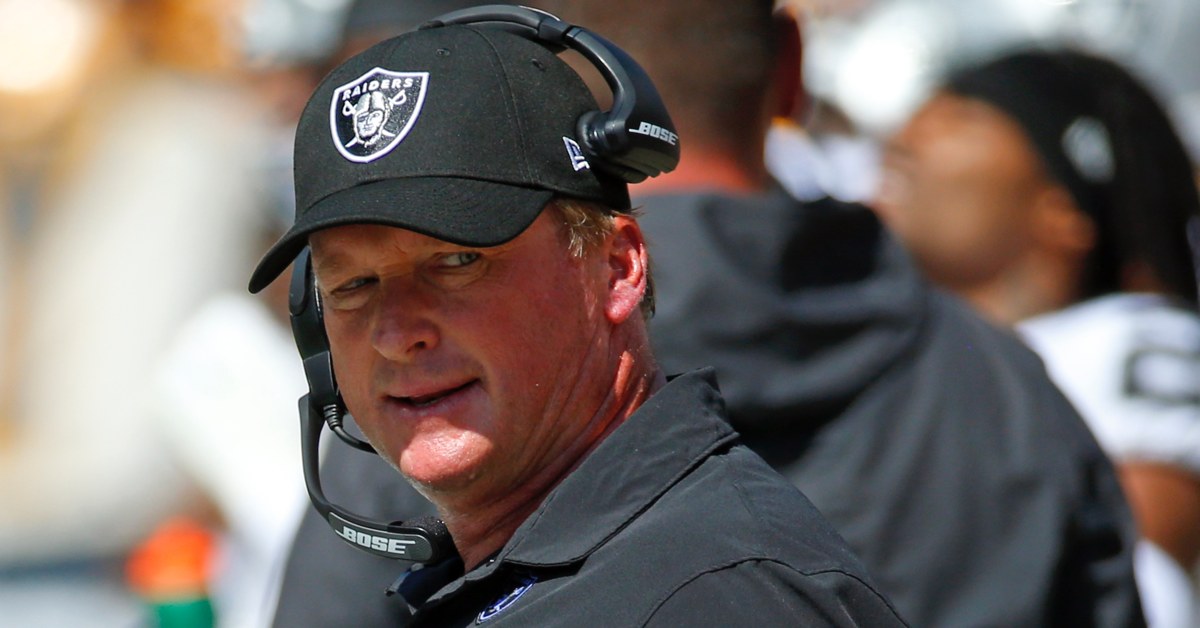 While conducting its investigation into workplace misconduct happening within the Washington Football Team’s organization that wrapped up this past summer, the NFL unearthed issues happening elsewhere in the league.

And Las Vegas Raiders Head Coach Jon Gruden is in the middle of a mess:

NEW: At the crescendo of the 2011 NFL lockout, Jon Gruden sent an email that used a racist trope to describe NFLPA executive director DeMaurice Smith. "Dumboriss Smith has lips the size of michellin tires.” https://t.co/MQn55oEMZE

Gruden, who apologized, said he was upset with how Smith was handling the CBA talks at the time. "I used a horrible way of explaining it," Gruden told WSJ. https://t.co/MQn55oEMZE

Gruden said he had been angry at the time because of the lockout and didn’t trust the direction the players, led by Smith, were going in the negotiations. He said he has in the past referred to people he believes to be lying as “rubber lips” and that he took it “too far.”

“I was upset,” Gruden said. “I used a horrible way of explaining it.”

Despite the apology to NFLPA Executive Director DeMaurice Smith, what Gruden said in the first place is problematic. We’re talking about one of the highest profile coaches in the NFL and the director of the NFL Players Association. It’s a big deal.

And indeed, the story continues, including a report that “the NFL is discussing Gruden’s status with the club.”

The NFL is sharing emails pertaining to Gruden with the Raiders. A person familiar with the matter says the NFL is discussing Gruden's status with the club. More for @WSJSports: https://t.co/MQn55oEMZE

The fact this is surfacing as part of an entirely different investigation (one unrelated to Gruden in the first place) isn’t great. So one way or another, there WILL be some fallout. Again, especially since the NFL is reportedly already discussing Gruden’s status with the franchise. It seems the league could look to discipline Gruden, who spent a chunk of last year in the league’s crosshairs for COVID-19 protocol violations.

In the end, we’re sharing a story featuring one of the league’s highest-profile head coaches, the NFLPA’s Executive Director, a racist trope, and a smaller piece in what is a bigger story about problematic NFL culture. That is too much to ignore, especially with the Raiders being the Bears’ opponent this week. This likely isn’t getting swept under a rug any time soon.