How About That Bears Offensive Line? Skip to content 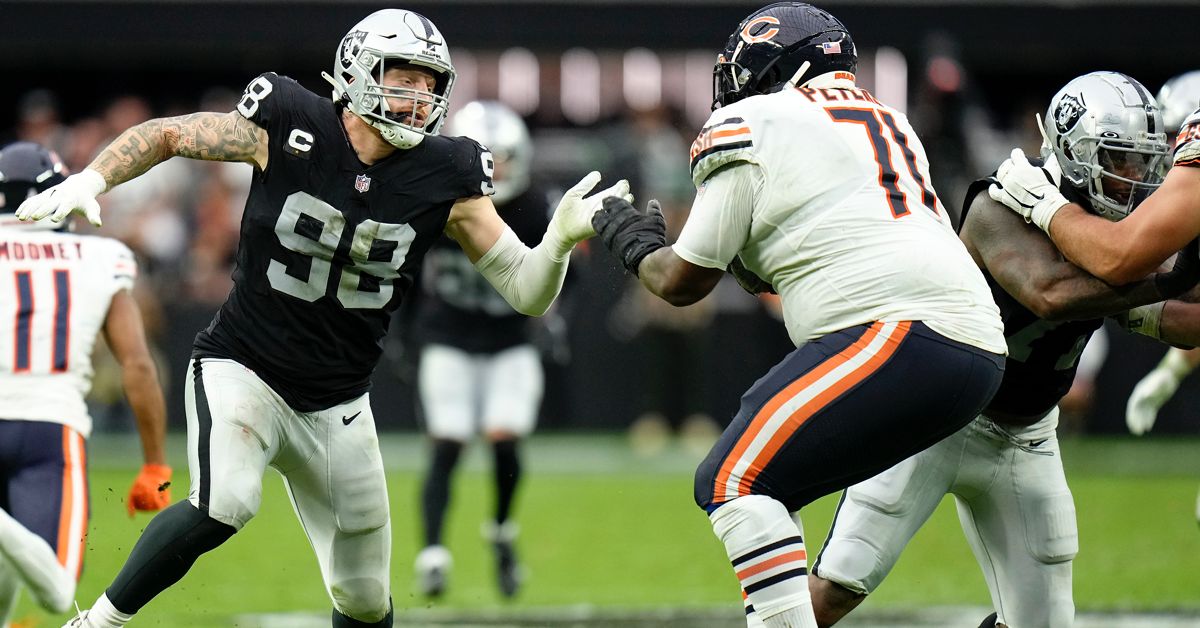 In addition to seeing the Bears win back-to-back games, we’re also witnessing some growth along the offensive line.

Or, at minimum, we’re witnessing what bounce-back efforts look like from players who were roughed up three Sundays ago in Cleveland.

But no matter how you slice it, the arrow is pointing up for the Bears offensive line right now. Between the group getting steady reps together and an offensive scheme that gets them into the action early, signs of life we’re not used to seeing are popping up. Let’s explore an offensive line that is starting to take steps in the right direction.

Blocking for a successful running game takes a team effort. It truly takes a village. But it starts with the five guys up front working together to drive defenders back and create holes. Watch how the big boys up front pave the way:

Get the down block from Mooney on the safety — and force the CB to replace/tackle.

Pretty good move here to win the 1-on-1 in space. @NFLMatchup pic.twitter.com/Pp1N9WRfKc

The Bears have 70 rush attempts and 318 yards on the ground for non-QBs in the two games Bill Lazor has been calling plays. That comes out to a 4.54 yards per carry average for Bears ball-carriers who aren’t quarterbacks. It’s almost as if the Bears’ identity is that of a ground-and-pound team. Not that there is anything wrong with it. After all, “just win, baby!” doesn’t have room for caveats.

With David Montgomery out for a few weeks while on IR, it will take a strong collective effort from a group that has all hands on deck. So long as the offensive line continues to get opportunities early and often to build up a lather, growth from blockers and ball-carriers alike figures to continue.

This is one way to assert yourself in the trenches:

Can I interest you in Bears guard James Daniels giving this Raiders linebacker a full-on Rock Bottom? pic.twitter.com/7mvcyCLxG7

There are times where the best way to impose your will is by doing so in an extremely physical manner. So much so, that it reminds those of us in a certain age group what Dwayne Johnson (a.k.a. The Rock) used to do at the height of wrestling’s Attitude Era. Knowing that Daniels is a free agent after this year, maybe Vince McMahon and Tony Khan will be sliding into Daniels’ DMs with a lucrative offer of their own after that show of strength.

Admittedly, I can make light of this situation because no one got hurt and James Daniels wasn’t hit with a penalty. But still … you’ve gotta admit you’re watching it over and over again. And not just because of how the offensive line was perfect in its execution on a zone blocking play.

Let’s Not Overlook the Pass Protection

This is a good pull from Bear Report’s Andrew Freeman:

Justin Fields took a lickin’ on Sunday. But for the most part, the offensive line held its own against what has been highly thought of Raiders pass-rush led by Maxx Crosby coming off the edge. That Jason Peters 88.24 percent pass-block win-rate is eye-opening. No one realistically expects Peters to perform at the All-Pro level he did while at his peak in Philly, but his last two weeks have looked good. Then again, there was nowhere to go but up after that Browns debacle.

Something New is Actually Something Old

One of the most eye-opening losses of the Matt Nagy era came in 2019 when the Saints came marching into Soldier Field, then wrecked what was a darn good Bears defense. If you’ll recall, they did so without a healthy Drew Brees. But some of you might also remember how the Saints used extra offensive linemen to help clear running lanes and add extra protection for drop backs. In what might’ve been a tip of the cap to Sean Payton, we saw Nagy sprinkle in some sets with additional offensive linemen later that year. And it was successful, too.

Fast forward two years, and Nagy was doing it again. Admittedly, this was out of necessity because the Bears were rolling with just three healthy tight ends. Nevertheless, we saw Alex Bars — an offensive lineman by trade — come in for 17 offensive snaps. Bars was even put in motion, which I’m sure he got a kick out of as someone who is used to putting his hand in the ground in the trenches.

Bars had a good run as the Bears’ starting right guard. He was solid on the ground and in pass protection. In his first start in the Bears’ re-aligned unit last yer, Bars didn’t allow a pressure against the Packers’ defense. And there was even a two-game span against the Texans and Vikings in which he allowed 0 pressures on 65 pass-blocking snaps. Taking this information into consideration, maybe there is a way to get Bars more involved in the offense. Because if going jumbo package helps in a small sample, why not keep trotting it out there and expanding upon it?