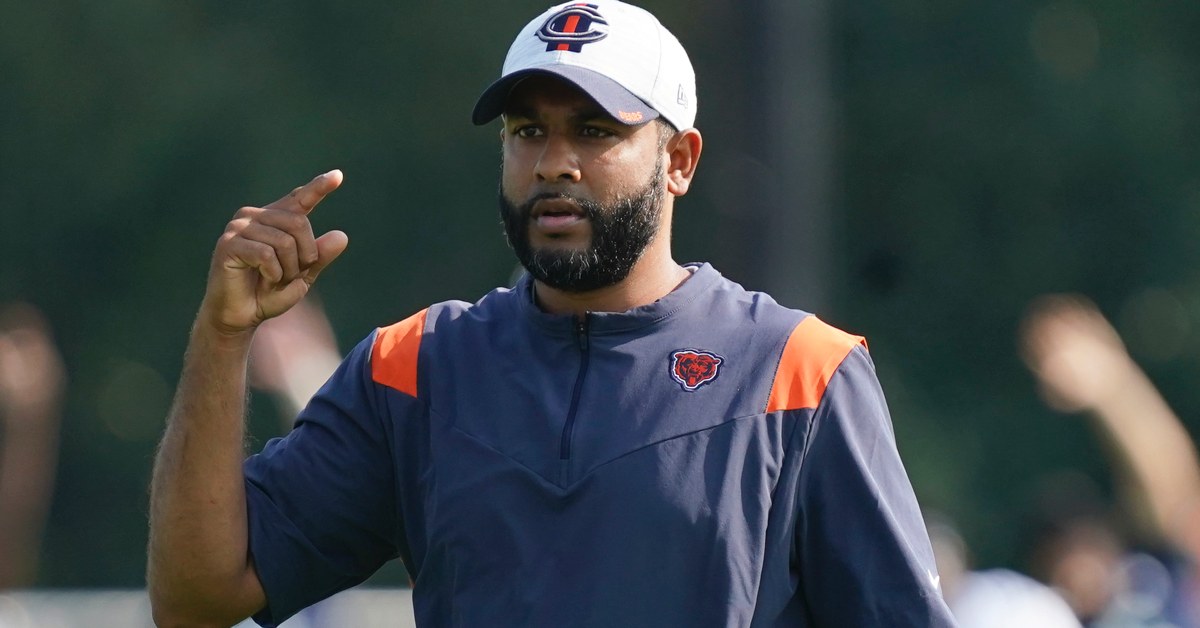 After spending the last few years learning behind guys like Vic Fangio and Chuck Pagano, Sean Desai’s fingerprints are really starting to emerge on this Bears defensive scheme. Through five games, we’ve seen Desai continue to creatively generate pressure, mask perceived deficiencies in coverage, and mix up packages to keep opposing offenses on their toes. Let’s highlight some things that stood out from Sunday’s win against the Raiders.

Attacking the Raiders’ Defense with His Team’s Strength

Coming into the game, we knew Vegas would have a new-look right side of the line. And while Kolton Miller made things tough on the left, it made it that much more important to find a way to win battles on the other side. And that’s precisely what Desai’s defense did:

#Raiders OT Brandon Parker got the start at right tackle in Week 5 (over Alex Leatherwood).

He allowed 3 pressures, 3 hurries and had 3 penalties vs. Chicago.

Finished as the team's lowest-graded player (36.0).

Even without Akiem Hicks mucking it up in the trenches, the Bears were able to control the line of scrimmage throughout the game. That group bullied Brandon Parker into being PFF’s lowest-graded Raiders player. They made first-round pick Alex Leatherwood’s slide to right guard look inconsequential. And they really established themselves as a force no one should want to mess with, no matter who is putting their hands in the dirt.

These Bears really did this:

Three sacks, four tackles-for-loss, and four quarterback hits shared among five different players. Four guys (Mack, Nichols, Gipson, Blackson) making waves in your front seven is a good look. And you know things are really cooking when  safety (Tashaun Gipson Sr.) is contributing with a sack, TFL, and a QB Hit. It really was an all-hands-on-deck effort in taking full ownership of a mangled line. But more importantly, it was a testament to a defensive coach’s scheme to go hard after an offense’s weakest link.

Student of the Game Stuff

We often hear this cliché about coaches being students of the game. But it sounds like the Bears really took it heart:

Carr wouldn’t say teams have figured out the Raiders offense, but Bears were calling out some plays. Mentioned uncharacteristic drops and said he thought Leatherwood did ok in first game at guard.

It is never good when your opponents are calling out your stuff *DURING* the game.

That Raiders quarterback Derek Carr was noting how Bears players were calling out plays is a testament to film study, as well as retention. The combination of studying, retaining, and applying knowledge is undefeated, no matter the arena. We’ve seen it play out in the physical sense, like when Jaylon Johnson jumped a route to pick off Joe Burrow in that win against the Bengals. But to see it come up in the way Carr presents it is eye-opening. Carr won’t say teams have the Raiders’ offense pegged, but it sounds like the Bears had ’em lined up.

One fair criticism of Chuck Pagano’s two-year stint as Bears DC was that he wasn’t creative enough with the players at his disposal. Because, in addition to having star-power in names, Chicago’s defense has unique athletes whose skill sets weren’t being deployed as well as they could’ve been. So, in a sense, the most refreshing thing about having Desai calling the shots now is that we’re seeing new wrinkles pop up weekly:

We’re seeing a lot of 3-safety looks today from Bears defensive coordinator Sean Desai, with both Houston-Carson and Bush getting snaps. Eddie Jackson is being moved around the defense a bunch.

The Bears’ questions in coverage date back to when they cut Kyle Fuller last offseason. And things in the nickel haven’t been the same since Bryce Callahan left after 2018. But rather than bemoan the loss of a star performer, or an underrated contributor, Desai has gotten creative in disguising coverage deficiencies.

Don’t love your cornerback situation? Dialing up more pressure up front has been working, but so has the utilization of Chicago’s collection of safeties. As Kevin Fishbain points out in the tweet above, we saw a fair amount of DeAndre Houston-Carson and Deon Bush getting reps behind Tashaun Gipson Sr. and Eddie Jackson. An increase in Dime packages, which leave Roquan Smith as the lone linebacker in the middle of the field, allows the Bears to use safeties who could hold their own in coverage against receivers and tight ends alike. But it also doesn’t leave the cupboard bare should an offense decide to impose a downhill rushing attack against a lighter defense.

It awesome to watch this second-year player win his battle en route to punishing Carr. But check out that defensive alignment. Notice anyone missing? Better yet … did you see who was on the sidelines cheering it on?

Both Khalil Mack and Robert Quinn are on the sidelines for that snap. Which means that there were some unheralded folks putting in big efforts to make that happen.

Let’s be real. Jon Gruden probably saw a rep where the Bears’ best pass-rushers were out and thought they could sneak one past the goalie. But credit Desai for dialing up some heat, as well as the coaches who prep the players ahead of this moment. A real team effort.

While depth players standing out is on my mind, check this out from DeAndre Houston-Carson:

DHC is on pace to set a career-high in snaps by the time we reach the season’s midpoint. Houston-Carson has been in on 62 defensive snaps this year and has been in on 19 percent of the team’s defensive snaps. That is an increase of 10 percentage points when comparing to last season. The 17 defensive snaps Houston-Carson played on is a single-game career-high. In fact, that 17-snap effort is more defensive naps than he had over 35 games played in the 2016, 2017, and 2019 seasons. As someone who spent the last few years coaching safeties, perhaps Desai sees something in Houston-Carson that others weren’t. And if that is leading to this increase in playing time, then keep rocking on and looking for more opportunities like that one.

Watching Desai’s rise has been a treat to this point. And after calling a whale of a game on Sunday, Desai deserves his flowers.

Sure, Khalil Mack stuffed the stat sheet on Sunday. And, yeah, Justin Fields threw down with a gritty performance in his first road win. But I can’t not look to the Chicago Bears first-year defensive coordinator out-dueling Gruden in a game of X’s and O’s without thinking: Damn, the Bears got a good one.