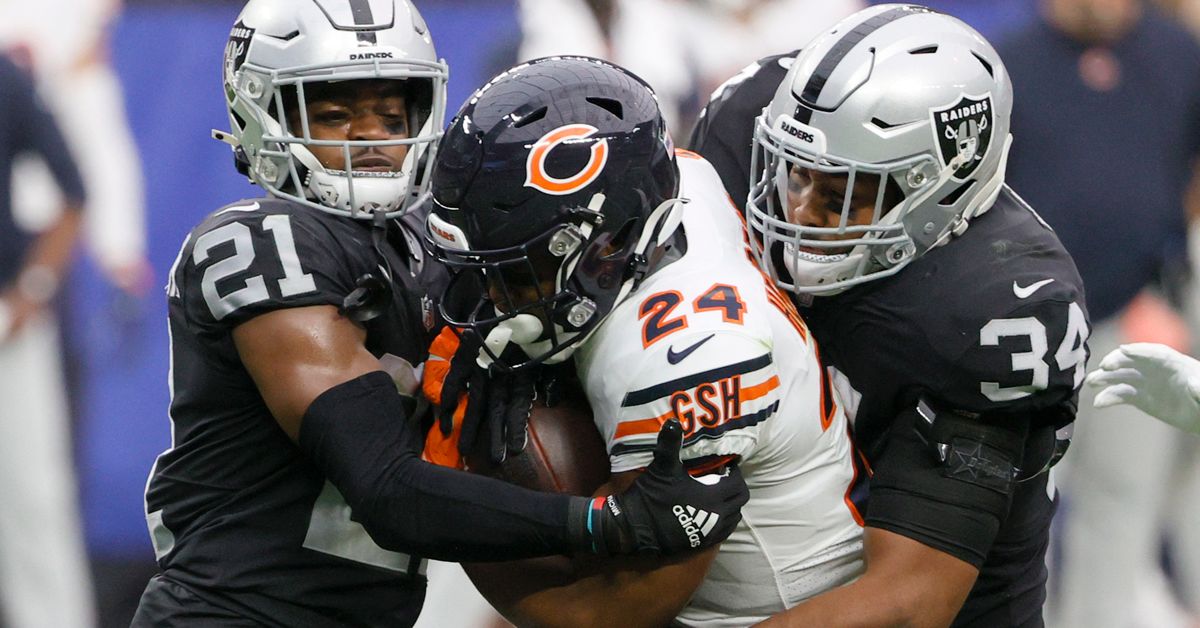 Back in April, I made a promise to throw a party if the Bears were able to select Ohio State quarterback Justin Fields in the 2021 NFL Draft. There’s even video evidence:

Also, Luis Medina of @BN_Bears promised us a party if the Bears took Justin Fields and we have the video to prove it.

So while it might’ve been a long-shot at the time – remember, the Bears were picking 20th overall and Fields was seen by many as a virtual lock to be a top-10 pick – but they made it happen. And now, I’m ready to make good on my promise. Because whaat better time to throw a party than Fields’ first Bears-Packers game? And what better place than Nisei Lounge?

To further hold up my end of the deal, I’m bringing some home-made baked goods. I’ll share on a first-come, first-serve basis when you see me at the bar. As if you needed any more motivation to see a star on the rise take on your fiercest rival while sitting at your favorite bar. Hope to see you Sunday at noon.

Just 11 days ago, the #Raiders were undefeated, riding high and eyeing the possibility of their first playoff berth since 2016. On Monday, Jon Gruden resigned as head coach and threw the team into a tailwind

What’s next for a franchise in shambles? https://t.co/xwEwKIcj82

Jon Gruden had to go, immediately. And not one person should blame “cancel culture”, this is called accountability. Period. pic.twitter.com/NIqPL2U7HV

•   Gruden’s coaching career at the NFL level is likely over. At least, it will be done with for some time. If that’s truly the end of this chapter, Gruden finishes with a 117-112 overall record, which includes a 60-57 mark with the Raiders. That run with the Raiders wraps up with a 22-31 mark in his second stint with the team, and ends at the hands of Khalil Mack, whose trade out of Oakland was the first of many organizational missteps.

•   It is difficult to read up on the Gruden situation and think this closes the book on things. Think about it. The Gruden email came to light as part of an independent investigation into workplace malpractice within the Washington Football Team’s organization. Moreover, the NYT report notes how emails came over a span of seven years and included Bruce Allen (a former WFT exec), Ed Droste (the co-founder of Hooters), Jim McVay (who ran the Outback Bowl), among others. Without getting too deep in the weeds, it is hard to imagine there isn’t more out there that hasn’t been shared to this point.

•   And with that being said, I hope the NFL (and others) can learn from this incident. What has been unearthed in recent days speaks to the toxic nature happening in the football community for a long time. The league, its players/coaches/front office leaders, sponsors, and others speak about doing better. But it’s long been time to put words into action. We can all be better, so let’s do it.

•   There is no smooth transition going from a serious topic to some more light-hearted Bears-centric content. But here goes nothing.

•   Since stumbling out the gates in Week 1, Chicago’s defense has been relentless. And it’s not just the production in terms of sacks (a league-leading 18) and takeaways (tied for ninth most). But it’s also the effort:

•   Having stud players obviously helps matters. But when you put non-stop motors in high-end players, this is what it is supposed to look like on this side of the ball.

•   Cut the stats up however you’d like. Khalil Mack was one one in Week 5:

•   Defensive excellence has long been the Bears’ calling card. And while the Bears’ offensive identity was supposed to change to a more modern, passing-based attack with Matt Nagy, Chicago is finding success in an old formula.

•   The Bears’ running game has been legit. We knew David Montgomery was the truth after his strong finish to 2020. Getting off to a strong start (before the knee injury) served as further confirmation. But to get strong contributions from Damien Williams and Khalil Herbert offer up a reminder that your identity is less about what you want it to be and more about who you are and what you do. As things stand now, the Bears are a run-oriented team with the potential to stretch teams vertically with play action. Sure, it’s basic. But it works.

•   Thinking of these Bears has me reminiscing about the late Doug Buffone’s three keys to winning football. Buffone, a Bears legend and Chicago sport radio icon, would often highlight the importance of running the ball, stopping the run, and pressuring the quarterback when it comes to playing successful football. And to this point of the year, the Bears are thriving in each of those categories. Chicago ranks ninth in total rushing yards, 12th in rushing yards allowed, and first in QB sacks. It’s not the prettiest formula, but it is one that is tried and true. So long as the Bears can continue excelling  in these areas, they have a puncher’s chance to win more games than they lose. And because of that, I’m starting to think differently about where the team can go.

•   If I could add one thing to the Buffone Formula, it would be to “cover everything” — which is whaat Jaylon Johnson is doing to this point:

CB1 has shined for the #Bears. pic.twitter.com/4US4Qs8B2B

•   And if I could add yet another thing, it would be to win the third phase:

•   Week 5 was one to forget if you’re an NFL kicker (unless you’re Cairo Santos):

Lamar Jackson is that guy.

There have been 4,017 instances in NFL history of a quarterback attempting at least 40 passes in a game.

•   Remember: The Bears host the Ravens on Nov. 21 at Soldier Field. This game will come after Chicago’s bye. Hopefully, the team puts the extra time to good use.

Wave if you are (1) The GOAT, and (2) extremely ready for the Blackhawks to be back this week.

•   Admittedly, this is a hefty chunk of change. But (1) it’s not my money and (2) Marcus Stroman has been one of my favorite pitchers to watch dating back to his time with the Blue Jays. In other words, I wouldn’t be opposed to my favorite baseball team shelling out this type of cash for someone who is good and fun to watch:

Marcus Stroman Could Get Five or Six Years at $25+ Million Per Year – Would the Cubs Go to That Level Right Now? – https://t.co/9pQu1K397I pic.twitter.com/6gmzZBbjwc