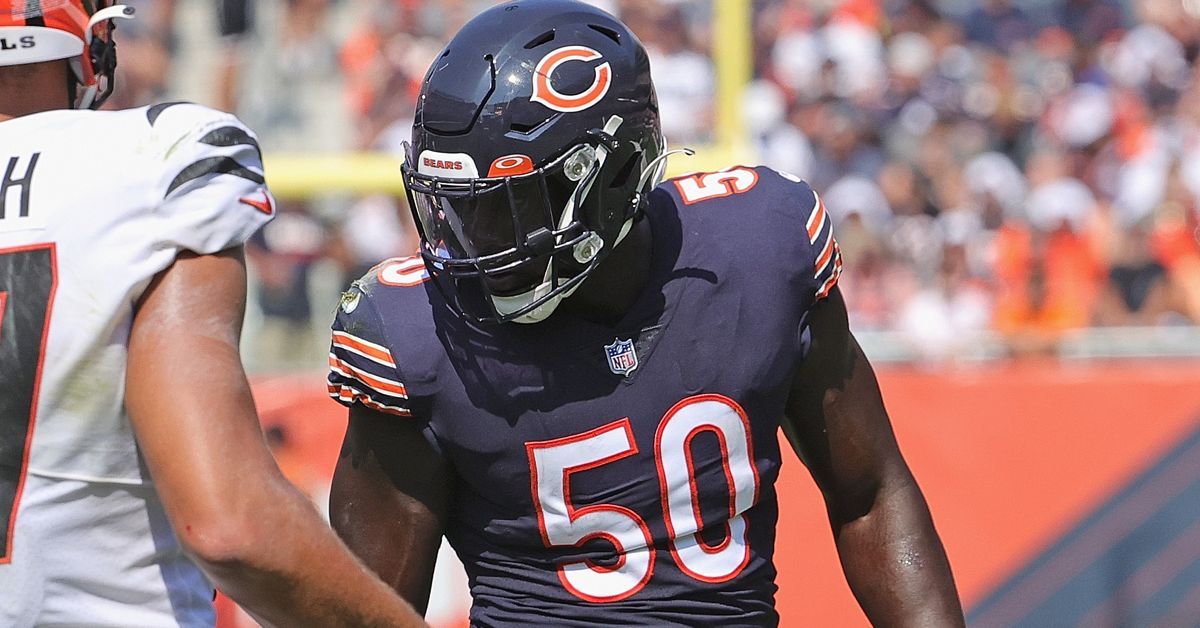 Chicago’s defensive depth, long viewed as a strength of this team, will be put to the test early in the 2021 season.

That’s because one of the Bears’ under-the-radar defensive contributors won’t be back for the rest of the season:

#Bears OLB Jeremiah Attaochu suffered a torn pec Sunday and is out for the season, per source.

NFL Network insider Tom Pelissero reports Jeremiah Attaochu tore a pectoral muscle in the Bears’ Week 5 win against the Raiders. Even worse, the injury is a season-ender for the outside linebacker. And that just plain stinks.

Here’s how the Bears are managing the roster in the meantime.

In a corresponding move, the #Bears are activating OLB/DL Sam Kamara from their practice squad to the 53-man roster, per source. https://t.co/5SKGb8hvVO

Attaochu, 28, came to Chicago as a free agent this offseason. Being on a two-year deal last offseason means Attaochu gets a chance to bounce back with the team next year. That’ll be neat to follow when the time come. In the meantime, the Bears move on without a key depth piece.

Even though he made no starts, Attaochu collected 2 tackles and a quarterback hit in 129 total defensive snaps. PFF grades Attaochu as the 66th best player among 106 qualifying edge defenders. I’d say that counts as a decent ranking among your peers. In addition to playing his role as the Bears’ third edge rusher, Attaochu chipped in to play on 22 percent of the team’s special teams snaps. Again, these aren’t eye-popping numbers from the well-traveled vet who has previous stops in San Diego, Los Angeles (Chargers), Jets, and Broncos. But we know better than to look past the importance and value of depth at key positions.

In his absence, look for Trevis Gipson to step into a larger role. Gipson, 24, was a fifth-round pick in the 2020 NFL Draft. After playing sparingly as a rookie, Gipson has seen his playing time go from being in on 7 percent of the team’s defensive snaps last year to 21 percent through four games this season. Gipson was a standout practice performer during training camp who was looking like someone to keep tabs on in the regular season. For what it’s worth, Gipson has two sacks, three tackles-for-loss, and two quarterback hits in his last two games. So at least Gipson has some recent good tape to fall back on as he moves ahead.

Even still … it stings to lose solid role players. Hopefully, the next-man-up nature of the NFL has other Bears backups ready to roll.