The running game was a vital cog of the Chicago Bears’ Week 4 victory over the Detroit Lions, and any plan to upset the Raiders on the road in Week 5 was necessarily going to require more of that success. However, with David Montgomery sidelined by a knee sprain, Damien Williams and rookie Khalil Herbert were left to shoulder the load for the Bears. Fortunately, they succeeded (albeit with a different mix of plays), as Williams and rookie Herbert led the Bears to two touchdowns in the first half and ground the clock down in the second half to secure a victory.

Let’s figure out exactly what they did, what worked, and what it could mean going forward.

As expected, the Bears began the game with a heavy dose of Williams (in fact, Herbert didn’t get the ball until under two minutes left in the first quarter). However, Herbert turned a 2nd & 5 carry into an 11-yard gain (and a first down) for the Bears at the Vegas 31, as the Bears marched towards their first score of the game.

Then it was back to Williams, who broke off a 14-yard run to set the Bears up at the Raiders’ 10, and by now, you’re starting to see the trend here. That run set up an eventual short pass to Jesper Horsted in the end zone to give the Bears their first lead of the day on Justin Fields’ first career touchdown pass.

Damien Williams was highly effective when running to the left, with five of his seven carries of five yards or more coming on plays in which he was rushing to the left behind left tackle, Jason Peters, including his second-quarter rushing touchdown. 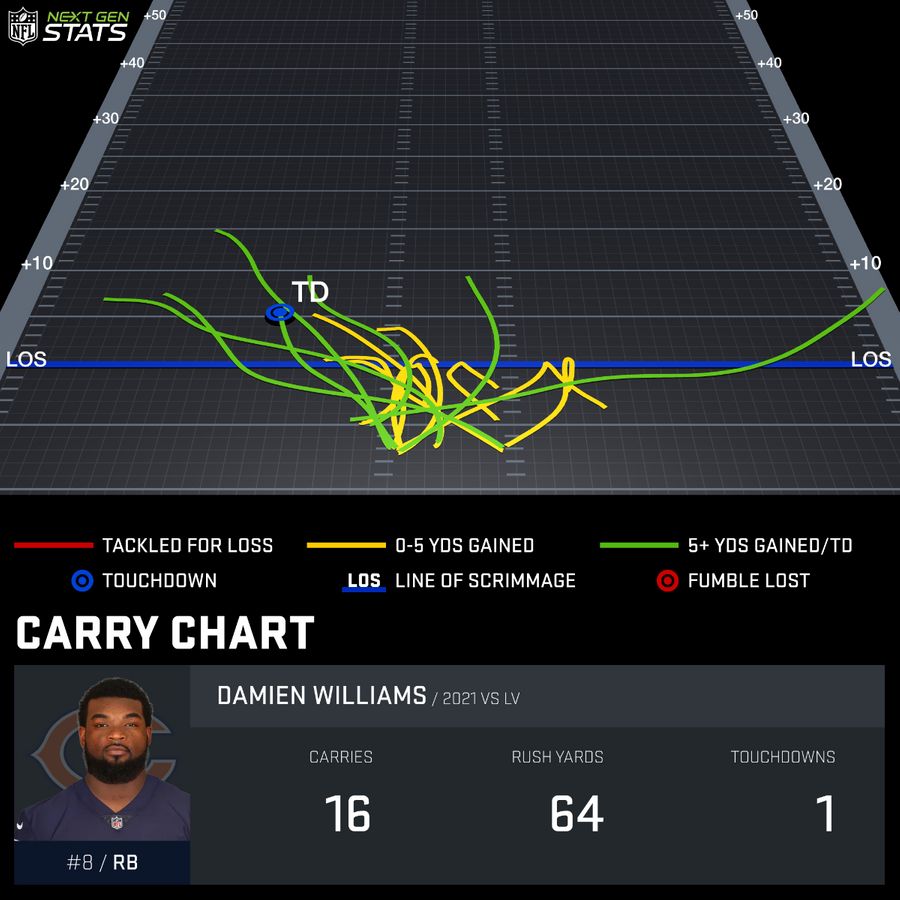 Check out Damien Williams hit the “B” button in Madden NFL on that touchdown run.

The next drive had even more balance between the two backs, with Khalil Herbert getting five carries and Damien Williams getting four. The key to this drive, and a byproduct of the balance and commitment to the rushing attack, was the time of possession. The Bears took over after Oakland turned it over on downs with 10:21 remaining in the second quarter, and Cairo Santos kicked his extra point with 1:56 left on the clock.

Considering what we saw in Cleveland two weeks ago, when the Browns kept the Bears defense on the field all afternoon, this type of ball control is a massive change of pace for the Bears – and an improving trend, at that:

But the story for the offense on Sunday was the rushing attack. Damien Williams and Khalil Herbert combined for 139 rushing yards on 35 carries (3.9 YPC) and set the tone for the Bears early on. Williams also caught a pair of passes out of the backfield for another 20 yards on the afternoon.

While Damien Williams is more of an elusive back who can be highly shifty, Khalil Herbert’s ability to absorb contact was why he saw an almost even split of the snap share with the veteran Williams, creating a multi-faceted attack for the Bears. Herbert actually got more snaps than Williams, with the rookie getting 34 compared to Williams’ 31.

Herbert picked up 50 of his 75 rushing yards after contact and forced three missed tackles against the Raiders’ defense. We don’t have any NFL sample size to compare Herbert’s performance to, but Herbert was seen as a one-cut back with great vision coming out of college, and that assessment played on Sunday in his first taste regular-season of NFL action.

In Matt Bowen’s clip below, you’ll see Herbert make one cut, find the hole, and get downhill for a nice gain.

CHI got some movement off the ball vs. LV.

In the following clip, you’ll see more of the same. This time, Herbert finds and hits a much smaller hole for a gain of nine yards.

Khalil Herbert showing off some impressive vision at the line of scrimmage, finding his hole, and picking up a gain of nine yards. https://t.co/VnUPymA0BG

The reason for the shared workload for Williams

What can we expect to see moving forward?

The shared workload for Damien Williams and Khalil Herbert was due to their different running styles. Williams is shiftier and more elusive in space and can effectively catch passes out of the backfield, while Herbert is better inside the tackles as a downhill runner.

Neither of these backs is as effective as one David Montgomery, but they provided the Bears with the balance they wanted to accomplish through the rushing attack. They kept the Raiders guessing, they got the ball down the field and generated points, and they allowed the Bears to control the clock and keep the defense rested enough to turn in a dominant performance.

With David Montgomery out for the foreseeable future, expect to see a heavy dosage of Williams and Herbert next week when the Packers come to town.