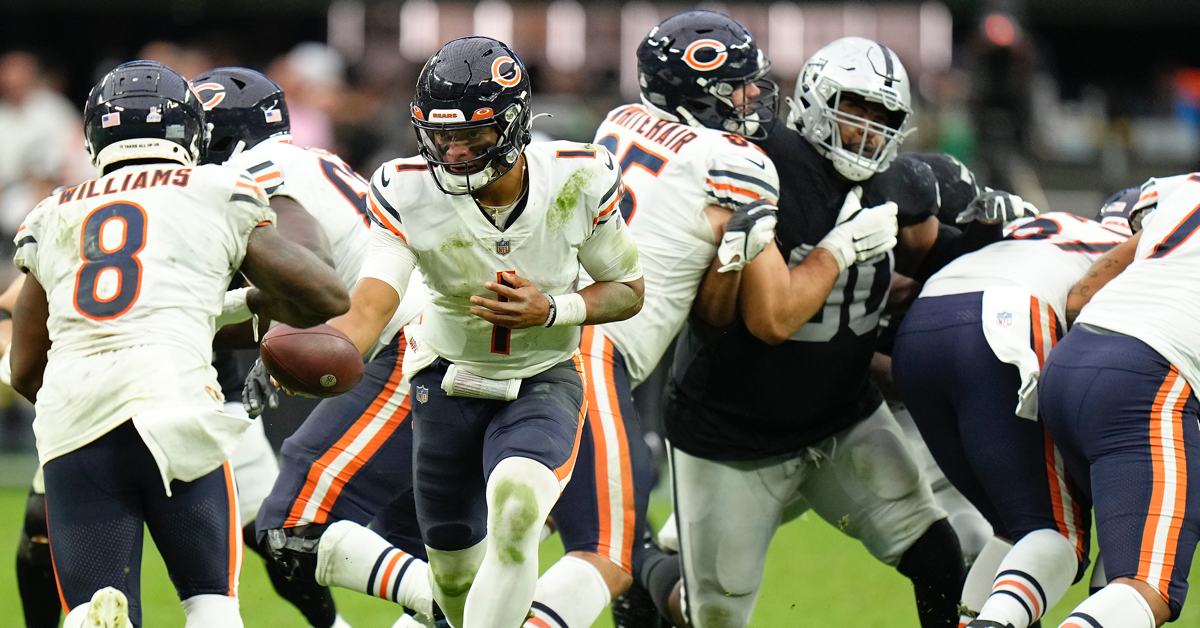 Shout out to the Chicago Bears’ social media team putting out a solid edit featuring some of the big guys up front clearing paths along the offensive line.

It’s always nice to see the offensive line get some love. And they’ve earned it, too. This group is coming off consecutive performances in which it has asserted itself early and throughout a Bears win. Let’s keep it real. Chicago’s football team isn’t leaving Las Vegas with a win without the performances from Jason Peters, Cody Whitehair, Sam Mustipher, James Daniels, Germain Ifedi, Elijah Wilkinson, and Alex Bars. A strong group effort led to a solid team win.

And yet, in the eyes of some, it’s still not good enough.

Pro Football Focus shares its latest offensive line rankings heading into Week 6. Not only is the Bears’ unit among the lowest-ranking in the league, they slide down a spot from the previous week. Ouch. Only the Dolphins (who dropped three spots from the week before) have an offensive line ranking worse than the Bears. Double ouch. That really puts some things into perspective.

Well, until other perspectives shift the thinking.

For instance, take ESPN’s blocking data. Using the site’s Run Block Win Rate metric, which charts the percentage of plays in which the line held up long enough to collectively win on blocking reps, the Bears’ offensive line is the eighth best in football. Hey, that’s pretty good! The 73 percent clip is tied with the Bengals, solidly has the group in the top-10, and firmly in the top-half of the league. Individually, James Daniels’ 88 percent win rate on run blocks is the second highest among NFL guards. He’ll need to put in some work to get back to No. 1, but that he remains with the cream of the crop is a good sign.

And, sure, the Bears’ 52 percent Pass Block Win Rate is football’s eighth worst number. That’s not good. Not in the slightest. But a poor pass-blocking group and a top-10 run-blocking group doesn’t add up to an overall ranking as bad as the one PFF puts out there. So while I understand how a variety of analytical eyes will see things differently, I struggle to see why there is so much of a discrepancy. Seriously. What gives?

We’ll continue to monitor the offensive line’s growth and growing pains throughout the season. Maybe we’ll see these two football analytical behemoths meet in the middle. Until then, we’re left to sort through the data that presents itself weekly.