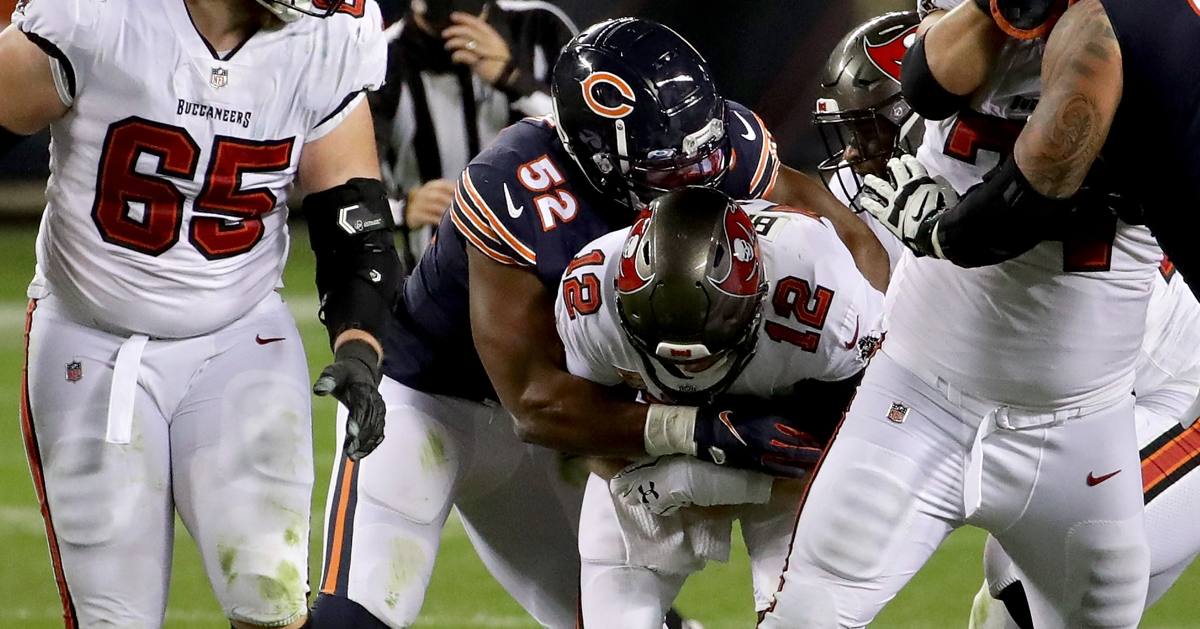 It was a BN x Talkin’ Toros get together on Friday at United Center for the Bulls home opener. And I can’t fully express how much fun I had with those people, in that building, with this team. On the one hand, that’s weird — especially when you consider my job is to put thoughts and feelings into words. But on the other hand, that there aren’t proper words to put things in the right perspective says everything you need to know about how special it was last night.

With that being said, this thought is rattling around in my head: I won’t pretend to know what the end game for this group of Bulls will be. But that’s the beauty of this thing. There is no script to follow because one doesn’t exist. The story of the Bulls moving forward will be written by the players as the season goes along. Let your imagination run wild, Bulls friends. It feels good to feel good about the Bulls.

🚨Upset Alert 🚨@89JonesNTAF believes the Bears are coming after Brady and will secure the win.

•   It’s not as if the Bears have no shot in this game, even if some oddsmakers putting them as near two-touchdown underdogs makes it feel was such. But in order to win, Chicago’s football team will have to muck it up. Drag this game into the mud. Turn it into a rock fight. Have this game turn into an event that would’ve made attending or participating in a taffy pull a more enjoyable occasion. It’s ugly football, as we can attest. But if it results in a win, then fans will be far more willing to live with the results.

•   And if this game looks like what James Jones thinks it can be, with Bears pressuring Tom Brady like there’s no tomorrow, then maybe an upset is more realistic than some experts are predicting.

•   This tweet came across my timeline yesterday and it hit me how much I want to keep this energy going into Sunday:

No analysis, Bears win sunday cuz this team is weird as shit like that.

•   Let’s be real with each other. This team is weird as heck. There is some Dr. Jekyll/Mr. Hyde stuff going on here. On any given week, this group can execute a game plan and win a game. And on any other given week, they can trudge through mud and leave you wondering how this franchise hasn’t fall apart just yet. Part of it is in the nature of football. Any given Sunday is more than a movie title, after all.

•   It’s not as if the Bears have no shot in this game, even if oddsmakers putting them as near two-touchdown underdogs makes it feel was such. But in order to win, Chicago’s football team will have to muck it up. Drag this game into the mud. Turn it into a rock fight. Have this game turn into an event that would’ve made attending or participating in a taffy pull a more enjoyable occasion. It’s ugly football, as we can attest. But if it results in a win, then fans will be far more willing to live with the results.

🔥 K. Herbert’s zone running ability. Shows patience staying on his track pressing the run into the heels of the OL, makes the DL & LBs flow, better angles for the OL blocks, which enables the cutback lane to open up!
Patience•Vision•Quickness•Burst
#🐻⬇️ pic.twitter.com/3PFnpM2gq1

•   Nothing but respect for Captain Cairo Santos, who hit the game-winning field goal the last time these two teams played:

•   Part of me wonders who the Bears have their eyes on, in terms of players eligible for the 2022 NFL Draft:

Scouts at the KU / OU Game

•   And there is part of me wanting to make a joke that they’re scouting Sooners Head Coach Lincoln Riley. The expectation is that this Sooners-Jayhawks game figures to be a blowout, so someone is going to shine.

•   Thomas Jones’ life after football is as fascinating as his playing career was:

•   Creating a successful second chapter isn’t easy for most NFLers. So to see Jones thriving in a new setting is neat to watch. Here’s hoping young NFL players see this path and get the inspiration to create their own.

•   I appreciate the concern:

#Packers CB Rasul Douglas says he was not fined for penalized hit on Bears QB Justin Fields. Douglas says he doesn't know what else he could do there, especially against a QB like Fields. He told Fields after hit it wasn't meant to be dirty. Fields said all was OK, he slid late.

•   Congrats to our friends at NBC Sports Chicago’s Under Center Podcast:

THANK YOU FOR LISTENING 🙏

Check out the latest episodes of the Under Center Podcast ➡ https://t.co/Js1FGHMPCo pic.twitter.com/Vwd07zpoSi

•   Today’s Epic Deals at Amazon are all Calphalon, from air fryers to pans to coffee makers to blenders. #ad

•   Did I mention the Bulls were fun earlier? Because the Bulls are FUN:

Strome Saga: It’s Time for the Blackhawks to Play Him or Trade Him https://t.co/qodca2CdCB

•   It is encouraging to see the Cubs add some diversity to their front office:

The Bears Are Planning to Activate Teven Jenkins, Who Could Be Available to Play on Sunday

What If We Could Quantify How Much “Help” a QB is Getting from Those Around Him? (We Can!)