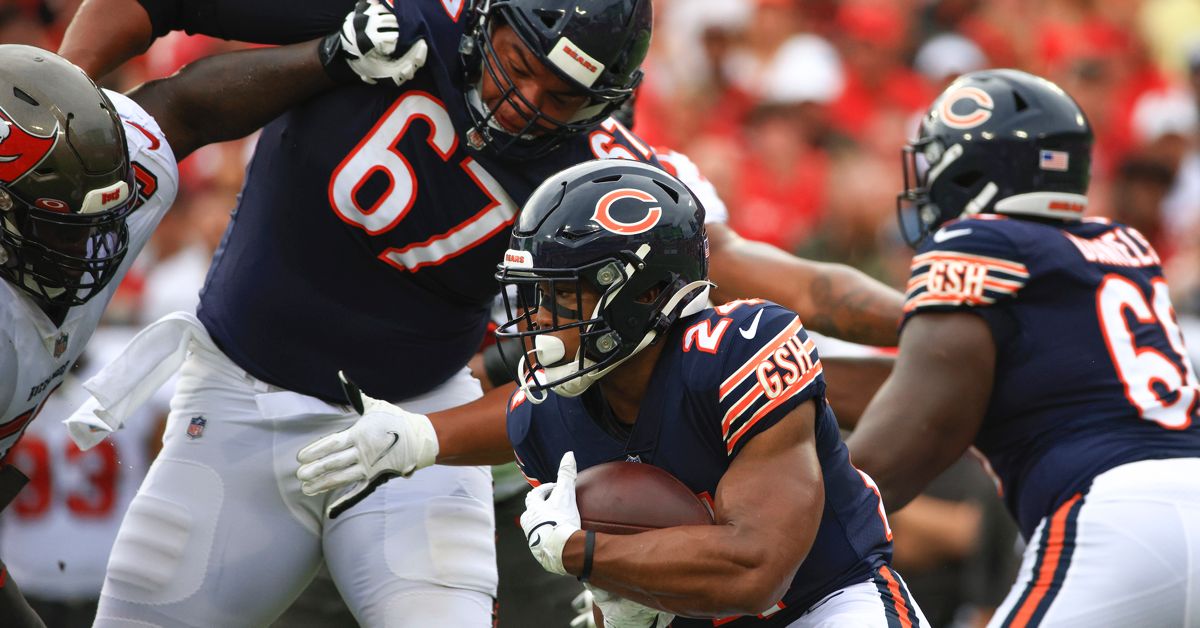 How I felt after sleeping through my alarms this morning:

The World Series begins tonight, which gives us four hours to think of something that isn’t the Bears. So, that’s nice. Give us a good one, gang.

•   While the Bears struggle to win games on the field, and deal with COVID issues off of it, one of their former players appears to be living his best life in Pittsburgh:

Been workin finally having fun w the game again #Nation 🖤

•   Miller has yet to play a snap for the Steelers since signing with their practice squad, but it sure seems like he is in a better place than when he left Chicago. I know better than to read too much into anyone’s tweets, but it feels damning to read about a guy having fun with the game again just three months after living the Bears. Maybe things weren’t fun in Houston either? Even if that’s the case, no one is having fun in Chicago after losing to Tom Brady and Aaron Rodgers the last two weeks.

•   In case you’re curious, there are just 13 days until the Bears face Miller’s new team on Monday Night Football. There is a high probability that one is circled on Miller’s calendar.

•   An astute observation of a rookie mistake:

Herbert has to abort the fake and pick up the Safety, protection takes priority over any Fake… #RBFundamentals https://t.co/Zg4ceh6KGs

•   Khalil Herbert has come in on a heater when it comes to running the ball, but former Bears fullback Jason McKie points out that the rookie needs to abandon his original responsibilities to prioritize protection in this moment. This is the type of mistakes rookies who begin the year as RB3 make. Moreover, it’s the kind of thing that conspired to drop Herbert’s draft status. Never known as one to excel in pass protection, Herbert now has something he needs to work on at the pro level in order to continue getting a fair share of reps moving forward. Nothing like on the job training with a little trial by fire to get the juices going.

•   The five words I’d use can’t be said without a dump button:

Describe the state of the Bears in 5 words or less:

•   But if I had to choose words that were on George Carlin’s list you can’t say on TV, then I’d go with: Protect Fields at all costs. That is less of a state of the Bears description and more of an edict worth handing down to anyone collecting paychecks from Chicago’s football team.

•   Tom Brady playing Chief Keef’s “Love Sosa” while yucking it up after demolishing the Bears is an all-time troll move:

JUST IN: The deal has been made with the Bucs fan who gave up the Brady ball.

2 signed jerseys + a helmet from Tom.

A $1K credit at the Bucs team store.

2 season tickets for the remainder of this season + next

•   The Packers will likely be without WR Davante Adams for Thursday’s Packers-Cardinals game after landing on the Reserve/COVID-19 list. This news came shortly after GB DC Joe Barry tested positive for COVID-19. As a reminder, it is a requirement for NFL coaches to be vaccinated. So it will take two negative tests at least 24 hours apart in order for him to return to the team. It seems unlikely Barry will join the 6-1 Packers in Arizona. But health and stopping the spread trumps calling plays.

•   It sounds like former Bears camp leg Brian Johnson is sticking around New Orleans for a while:

The greater the obstacle, the more glory in overcoming it! Congrats to Brian on his first game winner. New Orleans, you’re in good hands! pic.twitter.com/i68oqfVrRj

•   Some lucky student journalists were able to get a peek behind the curtain from one of the city’s best to do it:

Thanks to pioneering sports radio reporter Cheryl Raye-Stout for addressing my DePaul University class. Cheryl told the story about former Bears quarterback Jim Harbaugh standing up for her when the Bears tried to prevent her from interviewing players in the locker room. pic.twitter.com/6bS8Ff5unh

•   Clothes, pet supplies, and more are your Epic Daily Deals at Amazon. #ad

For the first time since he entered the NBA …

Zach LaVine has won four games in a row. pic.twitter.com/2RkR5pir1G

The Blackhawks Sell-Out Streak Is Over and Some Other Things Need to End Toohttps://t.co/G4kpxR7AsA

•   I’m getting to a point where I’ll be OK if the Cubs trade all my favorite players because (1) clean slates are good and (2) they deserve better than to be on a rebuilding team:

If Cubs Can’t Sign Willson Contreras to An Extension, They Will “Almost Certainly Shop Him” This Offseason – https://t.co/JVDXWGHO7w pic.twitter.com/fEzFDaYijK