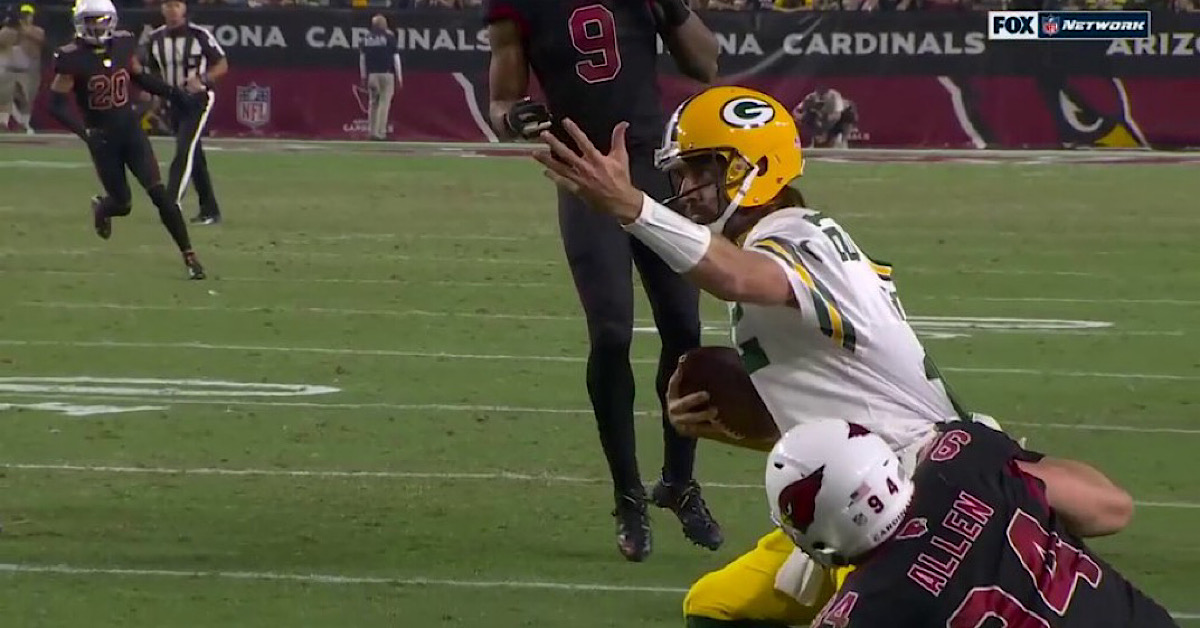 My friend Jim’s Korean Short Rib Tacos recipe looks like an ideal meal for a football Sunday. Or any day, really. I’m just looking forward to allowing myself to be hurt by the Bears’ offense again.

•   Weird as it may seem, it is a bit reassuring to know that the Bears aren’t the only team the Packers torture. Nevertheless, A.J. Green picked a rough time to forget he is a wide receiver. A tale of two radio calls tells the story:

As called on Cardinals radio: pic.twitter.com/Nbd7PvDB4F

•   Wayne Larrivee calling him “Rasual Butler” is a callback to all those basketball games he called over the years. But I’m not gonna front. Larrivee – who called Bulls and Bears games for a chunk of my upbringing – going late-stage broadcaster and flubbing a name like that made me feel old. And, frankly, I don’t like it. Father Time comes for us all, eventually.

•   This Dan Wetzel piece captures the spirit of the thing:

The wildest game of the NFL season ended on consecutive goal-line stands and one bizarre play (or non-play) by A.J. Green. What happened? “I don’t know. I honestly don’t know.” https://t.co/Mp7v9Xkxcd

•   If I wasn’t a petty mess, I’d tip my cap to the Packers. Winning that game, on the road, against the NFL’s last unbeaten team, despite all those injuries is a testament to their coaches and that guy who wears No. 12 playing quarterback. But I’m feeling awfully petty this morning, so no credit for you.

•   This is peak Aaron Rodgers:

when the gummy hits. pic.twitter.com/qrPIDLc2xv

Rodgers turned and looked at an official to call a "Horse Collar" penalty before he was even on the ground pic.twitter.com/juvEEezkKW

•   So not only do the Packers get the win, Rodgers becomes a meme legend in the process. Some guys get all the luck.

•   Turning the page to the Bears game by looking back at rookie year Roquan Smith:

•   Even though he didn’t join festivities until later in the summer due to a training camp holdout, Roquan has been playing like he was shot out of a cannon upon arrival. And save for any time he missed due to injury, he has kept that energy since. We haven’t been discussing a possible extension for the talented inside linebacker because it seems as if those conversations have been tabled for whatever reason. But at some point, talks should resume because Smith has been too good to let walk away.

•   Chicago needs Smith to be in peak form on Sunday, especially if Khalil Mack (foot) and Robert Quinn (COVID) are unavailable. But no one is stopping to throw these Bears a pity party because their two top pass-rushers might not play. Life in the NFL is tough. It’s a next-man-up situation. In other words, where some see crisis, others can see opportunity. Maybe Trevis Gipson joins the list of late-round draft picks who break through with big games. Perhaps Sam Kamara becomes the latest UDFA signing to climb the depth chart to make a splash play. Christian Jones can kick outside in a pinch if necessary. I’m curious to see what Sean Desai has in store for San Fran’s offense.

•   On the other side of the ball, it would be nice to see the passing game get going. Adam Hoge (NBC Sports Chicago) leads with an anecdote from Bill Lazor, who says: “The ability to run the ball statistically has almost zero to do with the effectiveness of play-action pass. Teams that don’t run the ball still are effective in play action.” And if any of that sounds familiar, it probably has to do with Chargers HC Brandon Staley going viral with his commentary saying the same thing. That doesn’t make it any less frustrating that the Bears’ run game isn’t opening up holes in the defense to spark the passing game. But I guess it’s nice that the Bears’ play-caller knows what’s up.

•   But also … the Bears should change this up:

•   Chicago’s best offensive player going on two seasons now might be place-kicker Cairo Santos. To the victors go the spoils and the profiles detailing their respective backstories. With that being said, this was an enlightening read from the Tribune’s Colleen Kane.

•   FUN FACT: Since the Bears missed out on signing Robbie Gould in the 2019 offseason after the 49ers gave him the Franchise Tag, Chicago’s kickers have made 89.7 percent (61 of 68) of their field goals. In that same span, Gould has made just 77.6 percent of his kicks. In hindsight, the obsession over Gould was pure silliness. And part of me doesn’t love how much I wanted him back in the fold. But on the other hand, a reunion story was too good to overlook and pass up had the opportunity come about. In the end, the best thing for the Bears was for the obvious storyline not to play out. Funny how that works sometimes.

•   Then again, the kicking carnival nonsense really did a number to kick the can down the line in terms of bearing down on Matt Nagy’s offense. Turns out that playoff showing was less of a blip and more of a sign of things to come.

•   Happy birthday to the best QB2 in the land:

•   Dolls, appliances, vacuums, cameras and accessories, and much more are your Epic Daily Deals at Amazon. #ad

•   It would be nice to see the Cubs ahead of the curve for a change:

•   That a most entertaining basketball game, even if the conclusion wasn’t what any of us were rooting for:

The Blackhawks Asked the HOF to X-Out Aldrich’s Name on the Stanley Cuphttps://t.co/q4HcoLXKkl