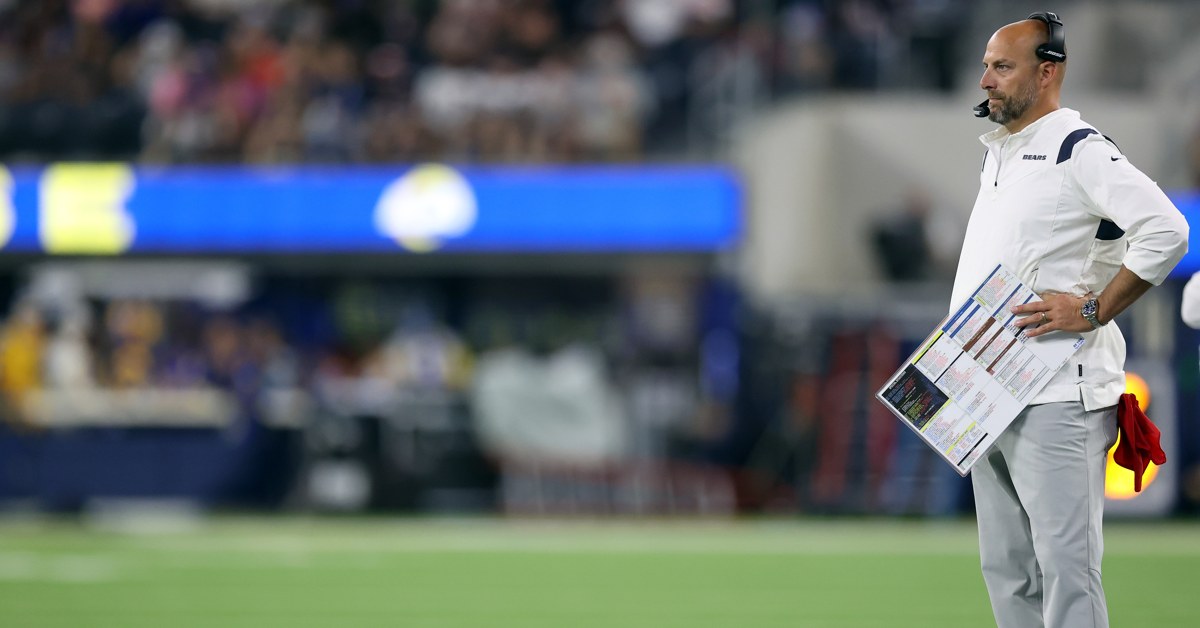 Self-awareness is an important trait to have for so many reasons, listing them here would take up a large chunk of this post.

But for what it is worth, Bears Head Coach Matt Nagy shows just a smidgen of it with this statement:

Matt Nagy on #Bears penalties:
"We had what I think 16 called, 12 for 115 yards and so you look at that and we know that there’s a lot of yards in there that we gotta be more disciplined, we gotta be better there. That starts with me."

The good news is Nagy admits there is a discipline problem. Admission is such an important first step. Moreover, it is encouraging to hear the coach say “that starts with me” and fall on the sword, rather than pin it on the players. I’m sure a handful of players committing those penalties appreciate not getting publicly flogged by their coach less than 24 hours after a nut-punching defeat.

But the bad news is that we’ve heard these words from Nagy before, like multiple times this year already and at least once in each of the last three seasons:

•   November 30, 2020: “Yesterday was flat-out embarrassing. That performance yesterday is ridiculous and can’t happen and obviously that starts with me.”

•   September 13, 2021: “We definitely need to play better and that starts with me coaching better.”

It has come up when discussing the lack of scoring from the offense, quarterback development issues, personnel usage, and other things that have come up in prior post-game look-backs by the coach. But at some point, the one saying “that starts with me” must be the one initiating change. One can say something only so many times before the words become hollow. Sure, sometimes, words have meaning. But they can be meaningless without actions that follow.

With that being said, we need to discuss the Bears’ penalty situation from Monday Night Football. Here’s an itemized breakdown:

Firstly, if it feels like the Bears were rung up on a bunch of penalties, that’s because they were. That six came in the fourth quarter really drives it home. And seeing how four came in the final 5 minutes truly nails it down. As does seeing a further breakdown of the penalties. Five offsides penalties is too many. Five in one quarter is way too many. Four coming within the last 4:30 of the game is absurd. If I didn’t know any better, I’d say the Bears were purposefully lining up offsides. Either that or it was a Jedi mind trick that fooled them into lining up on the wrong side of the pigskin.

What really ties it altogether is how each was a uniquely frustrating in the moment it happened.

Pick a penalty. We know how maddening the Marsh and Daniels penalties were in real time. But Jason Peters committing a false start on the first play of the team’s second offensive drive was annoying. Angelo Blackson’s unnecessary roughness penalty was truly both unnecessary and totally avoidable. Illegal formation wiping out a first-down pass play? Yeah, that’ll do something to the blood pressure. Too many men on the field? I know I wasn’t alone in yelling what — these guys can’t count!? at the TV screen. It felt like it was a never ending cascade of yellow laundry falling to the Heinz Field turf.

Which brings us back full circle to Nagy, who – in case you didn’t know – says it all start with him. We’ve been discussing disciplinary and cultural issues with the Bears for about a month. And that examples of the wavering culture at Halas Hall date back to the beginning of the calendar year is bothersome. Now, to be clear, there is a difference between in-house culture issues and on-the-field penalty problems. But there is something about having a messy home that can leak into other parts of life. So while I’ll fall short of definitely declaring that the cultural issues that have been piling up are causing some of the on-the-field issues, that we’re seeing issues on both fronts should bug every Bears player, coach, and fan.

It’s too much to ignore at this point. The Bears have problems. And the coach is acknowledging them, even going as far as to say the issues begin with him. But now, the time has come for the coach to do something about it. Thankfully, he has the bye week to sort through things.