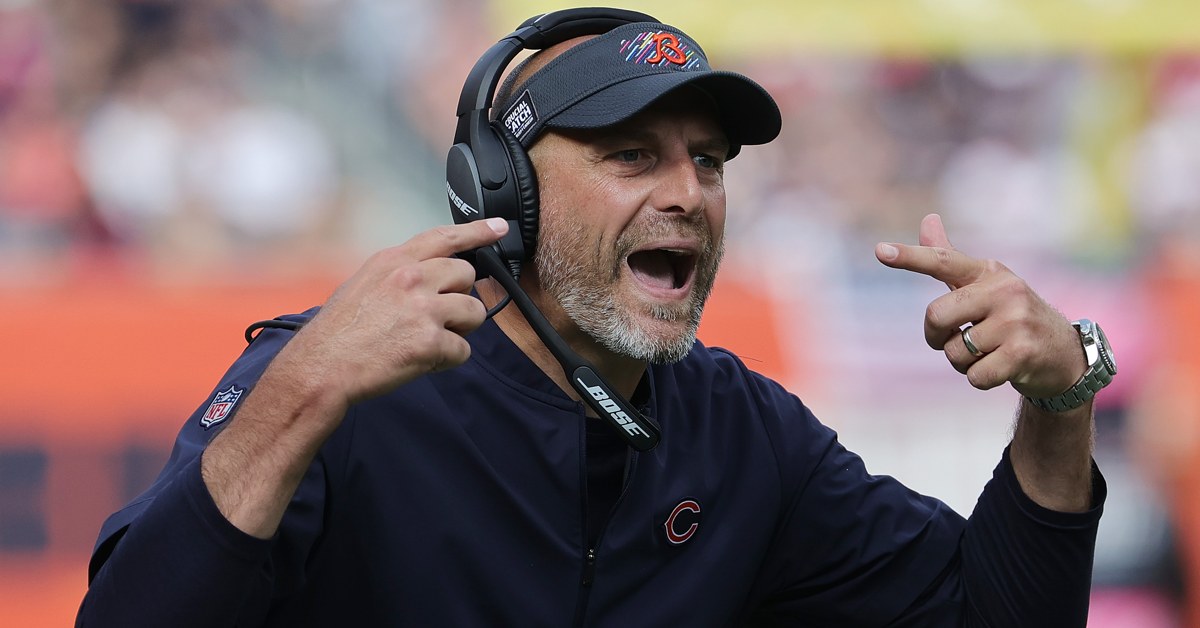 Yours truly is still trying to wrap his mind around a bar conversation centering around the idea that Kanye West’s “Robocop” is one of the greatest songs of all time. And let the record show that it wasn’t my argument. Although, I will say “808s and Heartbreak” Ye’s most slept-on album.

•   The Blackhawks beat the Kraken in Seattle last night, and have not trailed in the four games since making their coaching change. And as a Bears fan, it gives me ideas. Especially after another round of Matt Nagy saying things that make you scratch your head, roll your eyes, and wonder why even say that in the first place? For instance, this plate of word salad about taunting (as transcribed by PFT):

“People watch, and people want to see a little bit of respect and a little bit of doing things the right way. It doesn’t mean you can’t have fun, but there’s young kids right now that are watching games, and what happens is you go to one of these sporting events and you might see some imitation going on that’s taking it over the top. I’m a firm believer in respect and just kids growing and watching and we have a huge platform as leaders. Players and coaches. Let’s understand what the rules are, let’d do it the right way. Let’s still have fun — these guys are still having fun and not taunting. You can still have a great time. But let’s stay within the rules as we do it”

•   There have been several points in which Nagy could’ve gone full speed ahead and backed up his players while behind a mic. Instead, he does *gestures above* that. Not to say there isn’t a time and place to make that point, but now wan’t it. Not when it cost YOUR TEAM a game. It’s disappointing.

•   At least Nagy owned up to being at fault on some level, saying: “It’s our job to do it the right way. You’ve got to understand the rule. I need to do my job to teach that to the players so that they understand it, and understand these are the rules.” That’s kind of a self-own, in a way. Nagy essentially saying that he didn’t do his job, which means him not doing his job was essentially the difference between winning and losing on Monday Night Football. Ouch.

•   One of a coach’s most important jobs is to be a leader. And one of the keys to being a good one is accountability. This ain’t it:

Matt Nagy on their losing streak: "It's no one's fault other than everybody's."

•   You can’t be the same coach who says “that starts with me” while also saying “it’s no one’s fault other than everybody’s” because that’s not how this works. Words have meaning. So it’s either the losing streak starts with the coach or we’re pointing fingers at each other. One path will get you some leeway among the fan base. The other might get you some side-eyes in the locker room. These feel like troubling times for the Bears. That Coach of the Year award feels like a more distant memory with each of these slip-ups.

•   I’ve been one of Ryan Pace’s harshest critics, but I must say he’s already done this:

•   With all due respect to the collection of talent in the tweet above, putting together a solid running back tandem on your football team is just as joyous as piecing it together for your fantasy squad. The Bears have one of the best rushing attacks in the game right now. They rank fifth in yards and seventh in yards per rushing attempt. If only they could turn that into bigger and more open windows to throw through in the passing game. No doubt Chicago’s offense is struggling, but the ground game is doing it part.

•   Even though Nagy said it, I still have my doubts:

Matt Nagy said the #Bears do practice screens and acknowledged that they "want to be better there."

•   Is this the last successful RB screen run by the Bears?

The Jets had no chance of catching Tarik Cohen pic.twitter.com/cH9nHP3Rxu

•   Chicago has too much backfield talent not to have a worthwhile screen game.

.@AllenRobinson had an unusually quiet start but @adamrank & @paytonsun believe he could make some noise in the #Bears second half

"I think it would be a mistake to overlook Allen Robinson"

•   TVs and sound bars are among your Early Black Friday Deals today at Amazon. #ad

•   The NBA caring about “tampering” conveniently when it negatively impacts the Bulls is sus:

Something doesn’t add up with the way the NBA is treating the Bulls. Just sayin'. https://t.co/MXjUEKYP4s

•   Don’t miss out on the Thursday Night Football promo if you’ve been looking to get into sports betting. It’s an exclusive for our readers.