Remembering the Bears at Wrigley, Injuries Piling Up, Quinn's Path, and Other Bears Bullets Skip to content 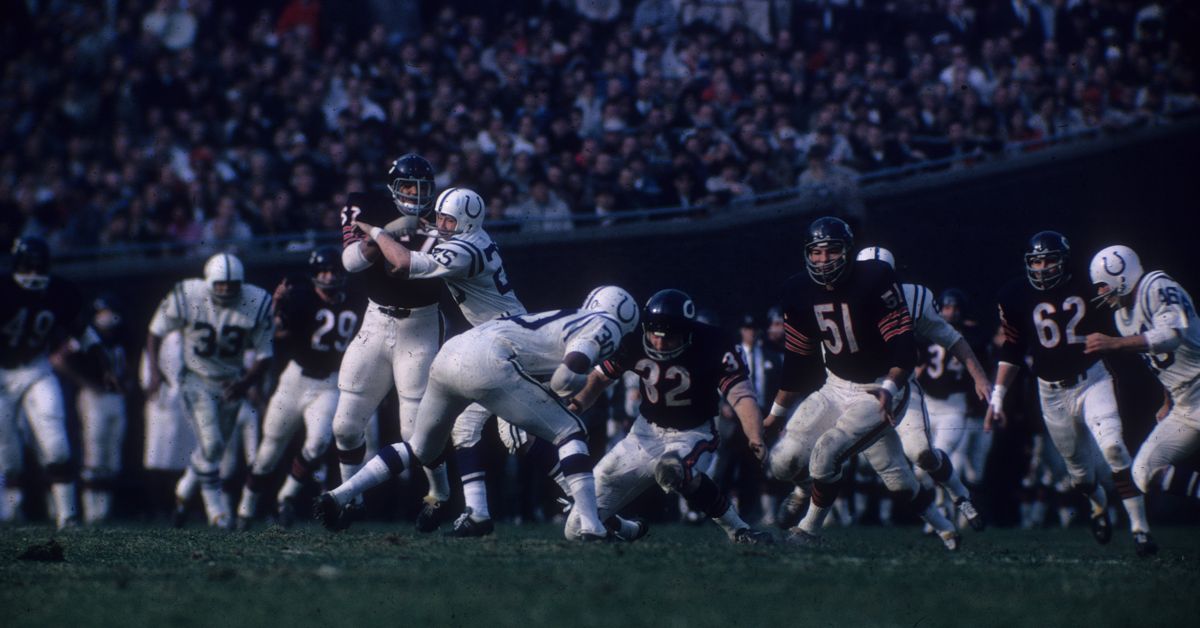 I’m taking it easy today after getting my COVID-19 vaccine booster shot not too long after the CDC announced it was expanding eligibility to all adults over 18. Between the NFL increasing protocols and my own hosting of Thanksgiving festivities coming up, it felt like a good time to get it in. And, hey, if you use it as an excuse to lay around and watch football all day, just remember there is no problem with that.

•   They’re playing football at Wrigley Field today. And as a college football neutral – so long as my Salukis aren’t involved – I’m thrilled to see how this looks. Frankly, this from Cubs broadcaster Pat Hughes gives me chills:

•   Unlike the last time football was played at the Friendly Confines, both end zones will be in use. It might be a tight squeeze in some corners, but it’s not like it’s unplayable.

•   Because I’m in a nostalgic place, I’m encouraging you to take some time to watch this Tribune video feature about the Bears playing at Wrigley Field once upon a time:

•   Fast forward to today and the Bears are facing an uphill battle against the Ravens. Not only is the injury news for the Bears quite bad, the Ravens are getting healthy just in time for kickoff. Quarterback Lamar Jackson, along with receivers Marquise “Hollywood” Brown and Rashod Bateman were all practicing on Friday, per The Athletic’s Jeff Zrebiec. Jackson is a legitimate MVP candidate with a trophy already under his belt. Brown is one of the more explosive young receivers in the game. And Bateman was a 2021 first-round pick who has tremendous upside. A weary Bears secondary will have much to contend with, assuming they all hit the field together.

•   It really does feel like the Bears lost the bye week:

With all of these injuries, the #Bears pretty much lost the bye week. Not an easy thing to do.

•   One way to combat that would be with a stellar pass rush. Admittedly, that will be more challenging without Khalil Mack. But Robert Quinn has been looking good this year. A bounce-back campaign (6.5 sacks, 7 tackles-for-loss, 8 quarterback hits in 8 games) has won fans over after a rough Bears debut in 2020. This week, Quinn is at the center of Jeff Joniak’s player profile:

•   It wasn’t until I watched this today when I leaned Robert Quinn has been playing with a brain tumor since he was a senior in high school. To make it this far with that burden is remarkable. It’s also a reminder that we never know someone’s whole story unless they tell us. With that being said, I’m glad Quinn can tell it. Moreover, it’s great that he can still show up with a smile no matter the situation.

Gonna need a whole lot more of this from Robert Quinn down the stretch. And I think he can do it. 🐻⬇️ pic.twitter.com/fCh7nFnlb0

Ok, so this is Robert Quinn smoking Penei Sewell for a strip-sack deep in the red zone. Sewell was the 7th pick in the draft, and Quinn made this look easy, and I believe Sewell had allowed just one sack through three weeks. Quinn is up to 4.5 sacks. pic.twitter.com/zjtsQXb83T

•   My apologies if you were looking forward to a Pernell McPhee revenge game. The first big-time free agent signing by the Ryan Pace regime is OUT this week for the Ravens.

•   This is really going down a path similar to John Fox with the way Matt Nagy comes through with non-answers to nest questions:

Asked Matt Nagy for specifics on what Khalil Mack's foot surgery would address. He indicated the toe was involved but didn't elaborate.

"That’s for the doctors and all them. That’s not for me. I just know that this is the decision we’ve made. … That’s not my profession."

•   Not that I want to look ahead too much, but there’s a real chance Jared Goff won’t get a second crack at the Bears on Thanksgiving:

•   A worthwhile extension crossed the wire on Friday:

•   Eagles tight end Dallas Goedert has PFF’s highest receiving grade this season among players at the position. Between that and the early season trade of Zach Ertz, it felt like only a matter of time before this deal was struck. Goedert, a second-round pick in 2018, was set to become a free agent after this season. And while Cole Kmet is trending in the right direction, a pursuit of Goedert would’ve made sense. Teaming Kmet and Goedert could’ve made for a nice tag team of targets for Justin Fields. And it would’ve made for an interesting attempt at solving the Bears’ pass-game deficiencies. At the end of the day, Goedert is off the board — which puts an end to this conversation.

•   Now that you’re curious, the following receivers are among those on the cusp of free agency once their rookie deals expire: Courtland Sutton (Broncos), Michael Gallup (Cowboys), Christian Kirk (Cardinals), and DJ Chark (Jaguars). Just sayin’ … there are some worthwhile targets who might be worth keeping tabs on and putting on your radar this offseason.

•   Happy anniversary to a special day in Bears history:

$1 per guess (up to 200), winner picks certified charity for donation! If #Bears win, we DOUBLE the total!

If you want to help but don't want to guess just reply "$" and it counts!

•   Soaps, shoes, home office, and more are among your Early Black Friday Deals at Amazon. #ad

•   Good luck to the Chicago Red Stars, the NWSL team on the hunt to bring another title to Chicago:

•   The Bulls are sooooo back:

LOOK WHERE HE TOOK OFF 😱

•   Brent Honeywell, whose screwball-changeup combo pitch is one of the most unique things I’ve ever seen, is taking his talents to Oakland:

The Rays and A’s Get Together on an Unusual Trade for Former Top Prospect Brent Honeywell – https://t.co/0insHKV7zU pic.twitter.com/GPHzDHQjQL