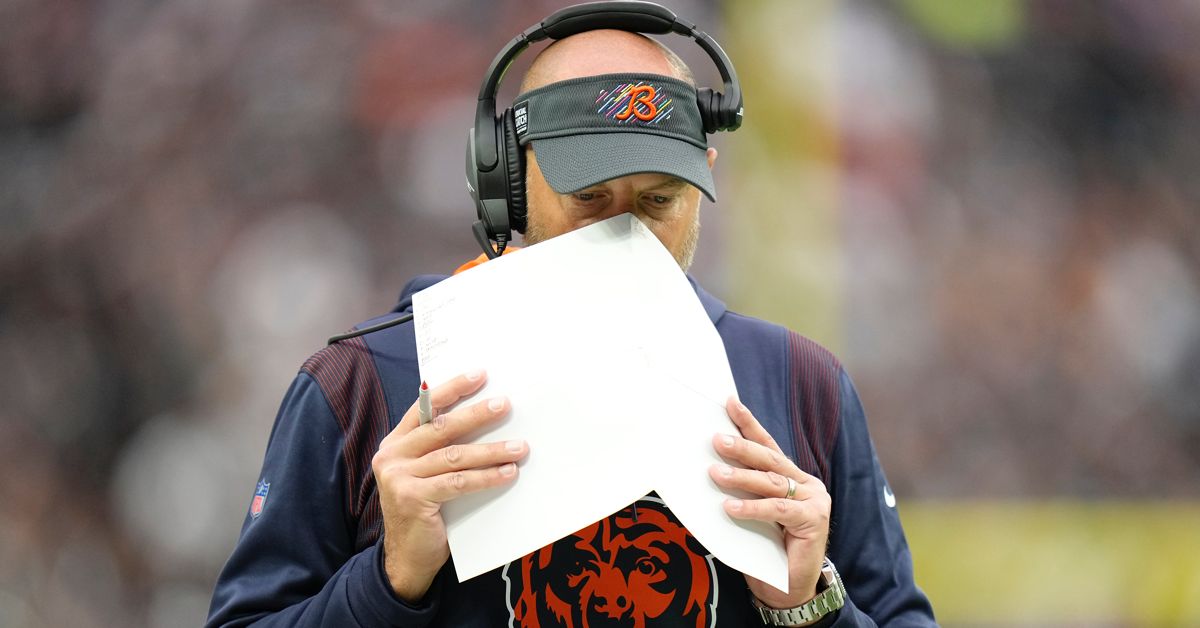 A tumultuous and chaotic week continues for the spiraling Chicago Bears. Now there’s more fuel on the fire of rumors on Matt Nagy’s imminent ouster.

Brad Biggs got a read on everything that happened after Nagy’s press conference where he denied the report that he had already been told he was being fired:

Matt Nagy met with #Bears ownership before the team's 2nd walk-through at Halas Hall and the coach told players it was a "productive" meeting, according to multiple sources, but didn't address a report about his imminent firing and then canceled meetings.https://t.co/QQUm7xo9J9

Biggs’ report is more layered, detailed, and nuanced than what was pushed into the arena early on Tuesday, though you’ll leave it feeling pretty sure Nagy is out.

In essence, Biggs’ reporting reads as if the order of events on Tuesday were as follows: Walk-through, noon press conference, a meeting with ownership, a meeting with players (where he didn’t reveal anything of substance regarding his job status), and then a cancelation of meetings for the rest of the evening. It is at least one possible conclusion that ownership had made the decision to fire Nagy, hadn’t told him yet and hadn’t wanted it to leak before Thursday’s game, but it did, so they immediately had to come tell him … after the press conference when he denied it.

If this is how it played out, then it’s a big yikes from an organizational standpoint. Also, where is GM Ryan Pace in all of this, by the way? None of this is normal. This isn’t how professional teams do business. And it shouldn’t be how a billion dollar entity and charter franchise does things. It’s a distraction for players and coaches, and the latest embarrassing chapter for fans.

Because even if the franchise’s plan was to nudge Nagy out the door after Thursday’s game, a leak springing before anyone could speak to the coach is a bad look. Think about it. The “best-case” scenario is the Bears coming off as clumsy and laughable in a situation with bad optics. And that’s pretty damning if that is the “best-case” scenario. There are even worse-case scenarios where the problem wasn’t merely communication clumsiness, but actual organizational malpractice. It’s the latest chapter of dysfunction authored under the surveillance of Chairman George McCaskey and President Ted Phillips. If the order of events on Tuesday were indeed what they seemed to be, then it was equal parts unprofessional and disrespectful. Imagine allowing your head coach to learn of his dismissal this way. And then to hang him – and his coaches – out to dry in this manner? And how bad does this look to the players?

This isn’t to say the Bears shouldn’t be looking to move on from a situation that has run its course. We know that it was time to let Nagy go. It’s just that there is a right way to do it. But this organization veered way off course and is nowhere near doing things the right way.

And to let this happen just two days before a game only amplifies the dysfunction. So, no matter how you slice it, the whole thing has been botched, fumbled, mangled, and handled poorly every which way.

Oh … and did I mention there are still seven games to play over the next 46 days? Because these next two months are going to drag if things like this keep up (to say nothing of having this same group of men in charge of selecting the next head coach … that has to change, too, but that’s a story for another day).

The writing is on the wall. You can’t help but feel the Bears are now at a point of no return. And that means the end of an era is near. It’s just a matter of when, and not if, it happens. Oh, and also how clumsily it happens, apparently.

The Bears Are Planning to Activate Teven Jenkins, Who Could Be Available to Play on Sunday

What If We Could Quantify How Much “Help” a QB is Getting from Those Around Him? (We Can!)