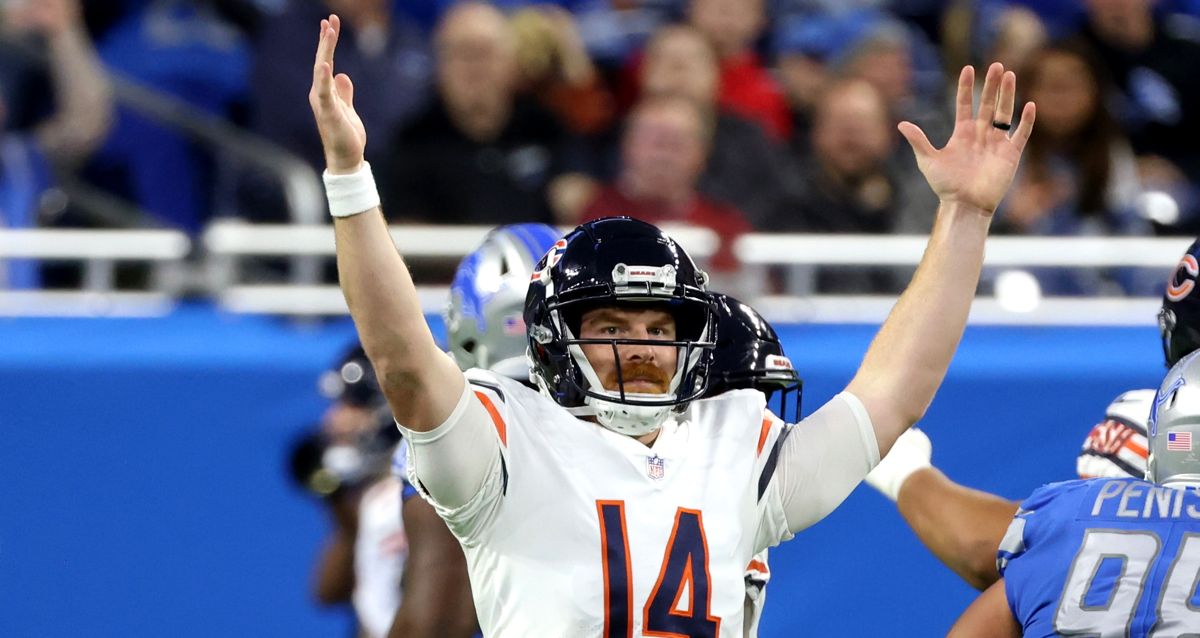 The Chicago Bears did not lose.

Cairo Santos made sure of it:

Santos made three field goals in Thursday’s 16-14 win against the Lions, making the Bears’ five-game losing streak is a thing of the past. It’s history. A fleeting moment that is now officially out of our grasp. Gone. Toodles.

They did not lose to a Lions team that was winless in 10 previous games this season. Nor did they lose to a squad that still hasn’t won a regular season game in 354 days. Tack on another day to that one, Lions fan. And then tack on 10 more until that unit gets another chance to reverse that trend. These Lions had won just one game in their last 17 tries. And when the Bears came to town, doing their best to let the Lions feast at home, Detroit was kind enough of a host to turn down the offer. How thoughtful.

And in the end, it was new year, new coach, same old Lions:

⇒   The Lions committed 10 penalties for 67 yards. And that last one was a doozy, with the team calling back-to-back timeouts. In case you were unaware, calling consecutive timeouts is a penalty that comes with a 5-yard mark-off. One play later, the Bears turned what would’ve been a 3rd-and-long into a 3rd-and-manageable-even-by-their-standards into a first down. That moment essentially put the game on ice.

⇒   But also … they really took a too many men on the field penalty on a PAT. EL OH EL.

⇒   I suppose the Lions could’ve won that game earlier. But an offense ranking 30th in points and 27hth in yards spent a chunk of that game averaging less than 5.0 yards per play. At the end of the day, the Lions came up with just 239 yards. You’d think they’d have done better with Khalil Mack and Akiem Hicks unable to play, Roquan Smith missing most of the game with a hamstring injury, and Artie Burns getting the lion’s share of snaps as a starting cornerback.

⇒   With that being said, I shouldn’t have been surprised to see the same offense face *TWO* 3rd-and-32 situations. Frankly, the real surprise was that the Bears didn’t commit a stupid penalty to give the Lions a first down either time.

For the record, it’s not as if the Bears weren’t trying to give the game right back to the Lions:

⇒   There was a stretch in which the Bears had 5 consecutive trips into Lions territory, but came away with just one touchdown. That’s awfully pathetic against a defense allowing the third most points and sixth most yards coming into Thursday’s action.

⇒   I guess the Bears could’ve put this one away early had they been on their P’s and Q’s. They cost themselves three points due to an Andy Dalton interception toward the end of the first half. And on the team’s first offensive drive of the second half, a holding penalty on Cody Whitehair negated a gain which ultimately led to a 53-yard Santos field goal attempt that fell woefully short. That moment conveniently served as a reminder that Matt Nagy chose to opt for a 65-yard field goal OUTDOORS with the same kicker. Just boggles the mind.

In the end, the Bears won a football game. And did so amidst a storm of rumors and unnecessary drama on a short week. But nothing that went down in that game did anything to move the needle regarding this team’s long-term future. There was nothing that represented a morsel of improvement by Matt Nagy as a coach. And it offered nothing to show that the players assembled by this front office are going to suddenly flip a switch and figure it out. Simply put, it was a team in the dumps beating a team that’s been down bad for the better part of decades.

But the Bears didn’t ruin Thanksgiving. If you reached the end of this post, I’d like to share my sincerest “thanks” for reading. Now, close this and go eat. Or nap. Whatever floats your boat.