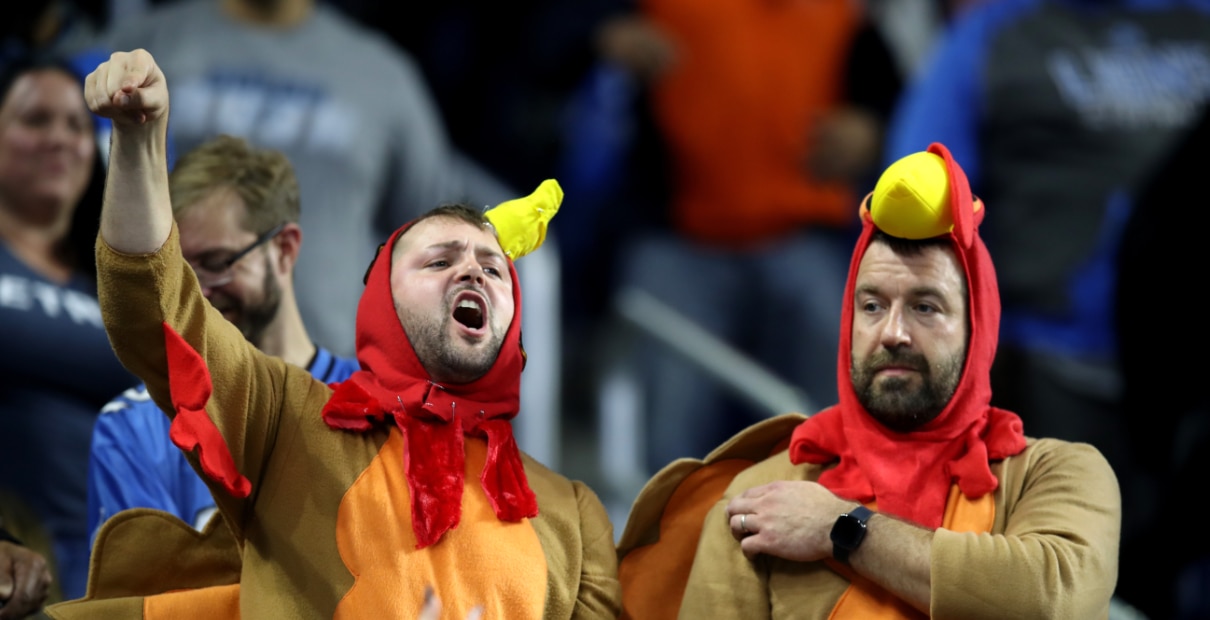 How are we all doing today? I hope that everyone’s holiday was as enjoyable and filling as mine was, but we’ve got some football to talk about this morning. Hopefully, you can find some time in between leftovers, leftover naps, and Black Friday shopping to read along.

•   Let’s start with the Bears’ uninspiring 16-14 victory over the Lions in the early time slot on FOX. If you would like to celebrate a last-second field goal victory over the winless Lions, a win that snapped a five-game losing streak and featured the backup quarterback racking up empty yards, by all means, celebrate away. I won’t tell you how to fan. I also won’t be celebrating with you. That victory was as uninspiring as it gets, and any game without Justin Fields under center getting reps for the future is an exercise in futility at this point:

The Bears Didn’t Ruin Thanksgiving By Losing to a Team That Took a 12 Men on the Field Penalty on a PAThttps://t.co/OpHV0xfm4V

•   The only meaningful thing that happened in that game, for me, was Darnell Mooney posting another 100-yard receiving game, his second consecutive game north of the century mark in receiving yards since I wrote about his arrow pointing way up. I’m not saying I’m taking credit for Mooney’s performance, but I was obviously a factor. I kid, but I couldn’t be more excited to see the second-year wideout continue to turn into a phenomenal receiver and future weapon for Justin Fields and the Bears. Lu put together an excellent thread on Mooney this morning over at the BN Bears Twitter that you should check out before that traditional grilled Thanksgiving ham and cheese sammy this afternoon.

Good morning. Just wanted to let you know that Darnell Mooney has back-to-back 100-yard receiving games. And the arrow is definitely pointing UP. pic.twitter.com/7mCo51WT0w

•   Other than Daniel Carlson giving my fantasy football opponent 21 points in a must-win matchup for me, this was probably the most entertaining game of the day. DeSean Jackson opened things up with a 56-yard touchdown strike in the first minute of the ballgame and set the tone for a game that would feature 69 points. Nice:

BIG PLAY TO OPEN THIS ONE.@DeSeanJackson10 gets the corner and a TD! #RaiderNation

•   Some extra Black Friday money for the over bettors in this one. Good for them.

•   I woke up from my traditional halftime of the Cowboys game Thanksgiving nap (which I extended a bit into the third quarter) to this beauty of a return by Tony Pollard that kept the Raiders from pulling away:

•   Parsons has six games left this season and isn’t too far away from Jevon Kearse’s NFL rookie sack record of 14.5 sacks set in 1999. And while Parsons broke a record, but the Raiders got the last laugh in this one.

•   Here’s Daniel Carlson for the win:

•   There were a staggering 28 penalties in this game, the most combined penalties in any game since 2016. Good to see the NFL officials getting their camera time in a primetime broadcast. It wouldn’t be a meaningful NFL game without it, right?

The 28 combined accepted penalties during the Raiders-Cowboys game were the most in a game since 2016 😳 pic.twitter.com/JaH1y6dqaG

28 penalties for 276 yards@NFL you should be embarrassed

•   Did anyone catch the little scrum at midfield while Daniel Carlson was devouring a turkey leg? It started when Raiders offensive lineman John Simpson and Cowboys defensive tackle Trysten Hill got into a verbal altercation that led Hill to knock Simpson’s helmet off his head. That caused a scuffle almost directly on the Cowboys’ 50-yard line.

•   The players weren’t the only ones throwing hands at the Raiders-Cowboys game, though.

•   I’m all about knocking back a few cocktails at the ol’ family gathering for the holidays, but Shannon Sharpe reminds us again why you should stay off the social media when indulging as the cognac got to him a little bit in this ant-Cowboys rant:

•   That Bills-Saints nightcap wasn’t much of a contest as Buffalo rolled to a 31-6 victory over New Orleans:

Screen pass to @MattBreida and he does the rest.@JoshAllenQB has FOUR touchdown passes! #BillsMafia

•   Will we ever see a Thanksgiving performance as good as Randy Moss’s Turkey Day debut as a rookie with the Vikings? Moss and the Vikings were playing backyard football that day, flea-flicker and all.

On this day 22 years ago, a rookie named Randy Moss cooked the Cowboys:

You think this year's Thanksgiving game with Andy Dalton and Tim Boyle is bad?

We lived through Craig Krenzel getting whooped by Drew Henson and the Dallas Cowboys in these gross uniforms back in 2004.

It could always be worse. pic.twitter.com/laYoEAP4iP

•   How many plates of Thanksgiving leftovers am I having today? (P.S. I’m counting that thumb and going with three plates.)

You all have jokes about Bears QBs but they just keep winning hardware: