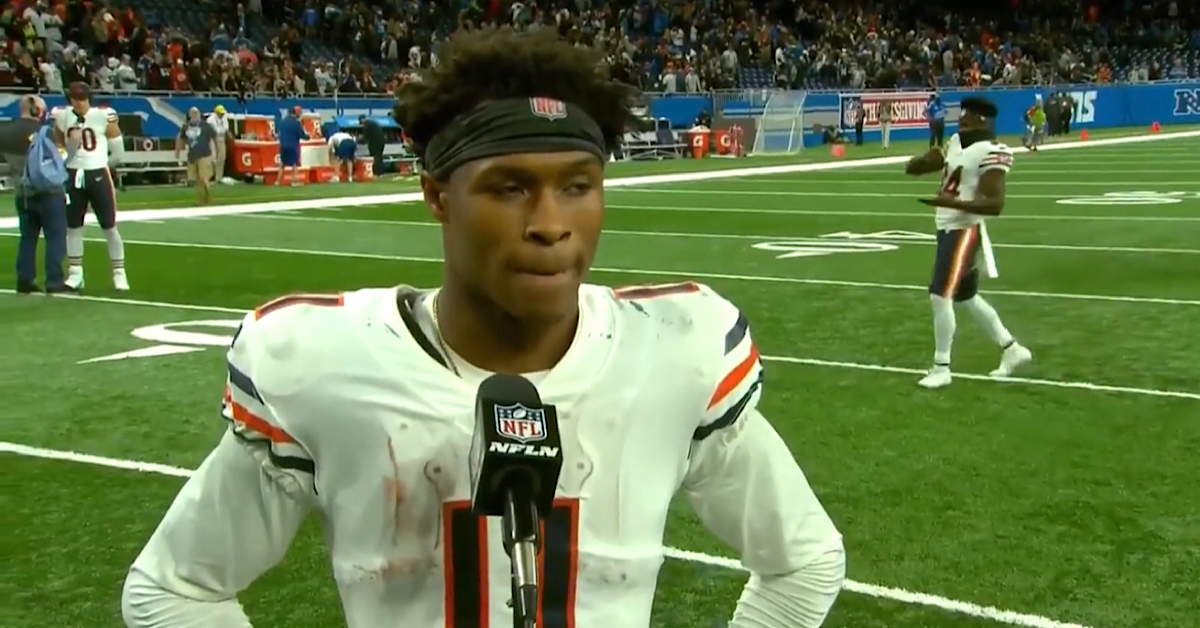 A variety of Bears players addressed the media, describing what it was like to go through the last week. We’ve rounded up some of the best replies to questions below.

The Bears’ QB1 (when the actual QB1 isn’t healthy enough to play) told FOX’s Tom Rinaldi winning despite the distractions of the week that happened showed the team’s resolve:

“It means a lot. Like I said a couple of days ago, there’s been no quit in anybody. And we showed that today,” Dalton said. “We fought to the very end.”

Maybe this comes off as a bit cheesy. And perhaps it’s a little cliché. But clichés become exactly that because there is a hint of truth in them. Let’s be honest. When the Lions jumped out to a 7-0 lead, the thought that they would fold like a cheap card table came across everyone’s mind. Well, everyone except the players suiting up on Thursday. That’s a testament to the coaching staff, to be sure. But let’s not overlook the gumption these players had to put it on the line for an embattled coach.

We’ve seen first-hand with how the Bears beat the Raiders how much a distraction can take a toll on a team. That it didn’t sink the Bears this week isn’t inconsequential. Especially if you think about the players who are under contract and will be here in the years to come. I don’t imagine that’s what folks want to read when “Fire Nagy!” chants are breaking out at a new arena nightly, but it is what it is (until it isn’t).

The Bears’ second-year tight end isn’t just a Chicagoland product who played his college ball regionally at Notre Dame. Kmet also grew up a Bears fan. And while that means he’s familiar with the chaos that comes with the territory, this was different. So much so, he had to turn off his phone:

This was Cole Kmet after Thursday’s win, acknowledging the mental strain of the week and some of the info he knew full well wasn’t rumor. pic.twitter.com/9oukRwS9FA

Two years into his Bears career, and Kmet has experienced some things. Two in-season quarterback changes as a rookie. An offseason in which his team made a free agent signing and trade-up in the NFL Draft to take a quarterback. Summertime jockeying between the starting quarterback and his heir apparent. And now, a week of in-house drama that would’ve made for great script content for a television show inspired by the happenings of professional football.

Additionally, Kmet shared with reporters his disappointment in things being leaked to the media in the days leading up to the game. And he also made a note to highlight how Andy Dalton and Roquan Smith spoke to the team the night before its win. Dalton coming through in a leadership role already is a nice sign. But that Roquan appears to be at the heart of things is a most encouraging sign from a long-term perspective.

If only we all had Darnell Mooney’s confidence and swagger:

Folks, get to know #Bears receiver Darnell Mooney… a humble superstar in the making… @nflnetwork 💪 pic.twitter.com/QYKaJMnFC7

When asked by Stacey Dales about the mental and physical toll this week took on him, Mooney said: “I’m pretty fine. I feel like I’m one of the most mentally strong people on the team, so I’m pretty fine.”

Dales went on to ask specifically about the reports of Nagy’s pending firing, and what dealing with that was like. To that end, Mooney said: “We didn’t let it get to us. There’s a lot of things that’s happened throughout our season. I think we handled it well, and now we’ve got the win.”

Mooney is starting to come into his own as a receiver. But also, as a competitor and a vocal leader.

The Athletic’s Kevin Fishbain has a variety of quotables from Bears players in the wake of the week that was in Bearsland. But it was the snippet from Chicago’s leading sack artist that caught my eye:

“Just, we brush it off. Whatever supposedly was out there, we brushed off and then no distraction. Came in focused and did what we have to do. So at the end of the day, from what everyone is saying, we all … I’m speaking for myself, I mean, I love Nagy, the way he approaches every day, so whatever the media is saying, I completely ignore it.”

Quinn’s words seem representative of an underlying theme this week. Put your head down, work your tail off, and leave it all on the field. Players can’t control the rumor mill. But they are cognizant enough to know their play can shift narratives.

Now, they players get 10 days between their most recent game and the next contest. And after the trying week that was, they’ve certainly earned an extra breather.