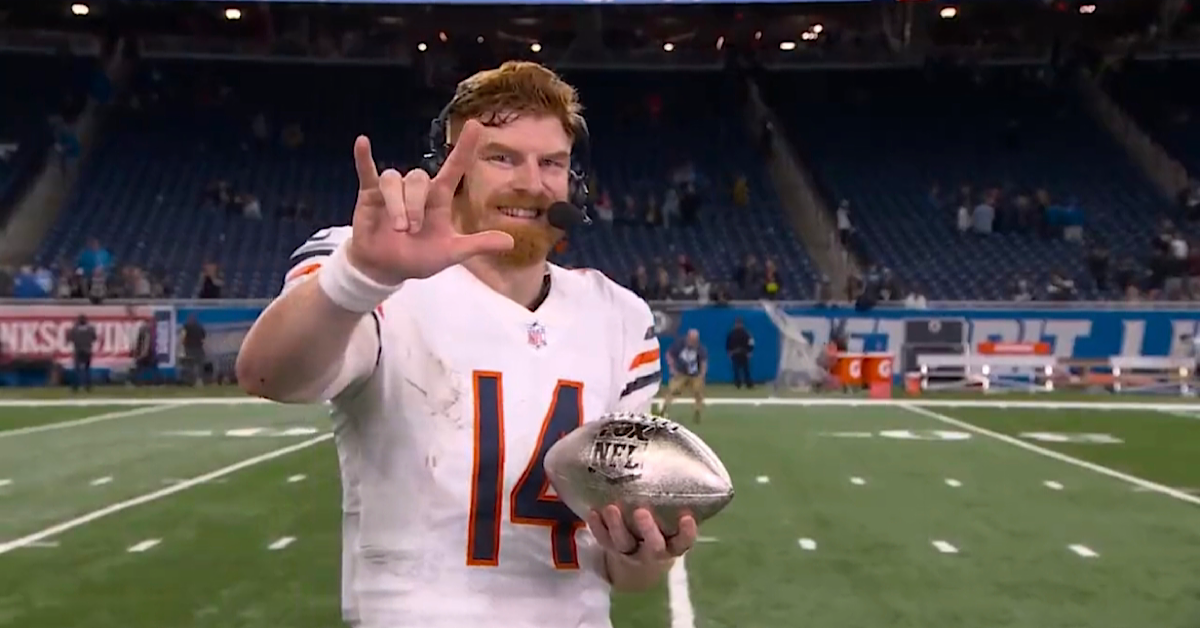 Doing my best to resist the urge to splurge on myself on Black Friday, but I’m only human.

•   What was the bigger accomplishment on Thursday? Andy Dalton becoming the team’s first 300-yard passer of 2021 or that Darnell Mooney put up back-to-back 100-yard receiving games. I’ll let you marinate on that as you navigate through the rest of Bullets.

•   The Chicago Bears organization created a chaotic firestorm in the days ahead of its Thanksgiving game against the Detroit Lions, but ultimately emerged with a last-second victory. But the big winner was Matt Nagy:

A smiling Matt Nagy just walked to the team bus with the game ball in hand. #Bears

•   Game balls are cool, but Dalton came away with the coolest prize:

•   For all the chatter that led up to that game — players being “pissed” by how things were going, reportedly wanting their Nagy fired, and all the other dysfunction that piled up between Monday and Wednesday — that the embattled head coach was given the game ball is telling. And for Nagy, it’s probably the best news he has been a part of this week. Because a lost locker room doesn’t give Nagy the game ball. Maybe the locker room won’t be his for that much longer. But for one day, Nagy was in a good place.

•   To be clear, this isn’t to say there aren’t players who aren’t fond of Nagy being their head coach. Playing a pure numbers game suggests the odds are a good chunk of players who are over it all. Think about it. There are 53 players on the active roster and 16 on the practice squad. Tack on seven more who are on IR or physically unable to perform. And now we’re looking at 76 different players with unique opinions and viewpoints. It is impossible to get 76 people pulling on the same end of the rope all the time. In other words, there will be dissension at some point on the roster. Various points, even. It’s just a numbers game.

•   None of this to say that it isn’t time to move on from this current regime. I think Bears fans know when it’s time to move on from a situation that isn’t working. And this feels like one of those obvious situations. But moving forward, I think we need to reel it in when it comes to blanket statements representing a locker room of nearly 80 players.

•   Ultimately, the most important thing to come from that game wasn’t the end result. Instead, the most important thing to reveal itself from a bad Bears team downing a worse Lions squad is that Nagy and his staff showed no signs of improvement. They did nothing schematically or from a game-plan perspective to suggest that this group deserves to stick around for the long-term development of Justin Fields. The same things that have bogged this thing down over the last three years continued to bog them down on Thursday.

⇒   Coaching: The Lions had coughed up consecutive 100-yard rushing games coming into Thursday. And had given up five such games this season. This should have been a game for David Montgomery to eat, especially given the QB situation. Instead, the Bears gave Montgomery just 17 carries. Few things were as annoying as seeing the Bears run the ball just seven times in the first half. Given the information above, this was unacceptable.

⇒   Personnel: While “Fire Nagy!” chants were all the rage the past few days, GM Ryan Pace is Homer Simpson walking away from the overflowing sink that exploded behind him. Because for as much guff as Nagy has taken, Pace should be getting it equally. And nothing encapsulates that more than looking at Chicago’s cornerback situation. No, Kyle Fuller isn’t tearing it up in Denver. And perhaps Pace deserves a tip of the cap for providing another data point in which he let a player go at the right time. But in no logical football world should Desmond Trufant, Kindle Vildor, and Artie Burns have been the only corners vying to be Fuller’s replacement.

Trufant didn’t even make it through the summer with the team. Vildor had limited exposure last year as a rookie. And Burns is coming off a 2020 year that never left the station because of a summertime ACL tear. That this front office thought it was OK to go into 2021 with a second-year player who was in on just 13 percent of the defense’s snaps as a rookie and a reclamation project coming off a major injury as his top two cornerback options in a make-or-break year is just inexcusable.

⇒   Discipline: Kudos to the Lions for their efforts in racking up enough penalty flags to almost distract from the disciplinary issues the Bears still have when it comes to that aspect of the game. Detroit was the beneficiary of the only first-down from a penalty. And while Kalif Raymond might’ve sold an unnecessary roughness penalty with a little bit of a flop, Alec Ogletree simply can’t take that penalty.

•   But hey, a win’s a win — right? To come out from that week and feel good at the end of the day must feel nice:

Every W in this league is a blessing – Great team win! @ChicagoBears

•   Think the players are relieved?

•   Not to be lost in the shuffle, Patrick Finley (Sun-Times) writes about Cairo Santos getting redemption after missing kicks in consecutive weeks. That was certainly a nice touch. Because even after missing a 53-yarder indoors, Santos has been true on 90.2 percent of his field goals. But that he is just 2-for-5 from 50+ yards strongly suggests the Bears should know his limitations by now.

•   Mark Konkol, the Patch reporter whose story set the ball in motion for this week of wackiness, wonders if something changed or if he got “bamboozled” by a “high-level” source. In his latest column, Konkol sums it up perfectly: “If my source fed me bad information about Nagy, I should have done better, much in the way the Bears should have done better.” (Patch)

•   Jared Goff probably saw a defensive lineup without Khalil Mack and Akiem Hicks and thought it was a good time to bust a slump. And yet, the end result was another loss (with a side of online slander):

He is 0-16-1 in his career without McVay. pic.twitter.com/XeryZqgaeY

•   For whatever it’s worth, maybe Goff was right if he was thinking about it this way. After all, he completed 84 percent of his passes, threw 2 touchdowns and no interceptions, put up a 121.8 passer rating, and was taken down by a sack just once. But some guys just get no luck.

•   You’ve just gotta love when guys give back to the community:

Continuing with the #thanksgiving love, Akiem Hicks @The_Dream99 teamed up w/ Eat Clean Chicago for his fourth annual Thanksgiving turkey distribution for the local Boys & Girls Club, where the @ChicagoBears lineman passed out food and engaged with the kids on his own birthday. pic.twitter.com/06N8X6ife2

•   Black Friday at Amazon means about a bajillion things are on their best sales of the year, so go peruse if you’re looking for just about anything. It’s just a lot of stuff. #ad

•   Jon Gray is the ideal free agent target the Cubs should be looking at signing. The stuff is good, he is at the age where he should be hitting his pitching prime, has shown he can navigate tough hitters parks, and has a unique prospect pedigree. But if the Cubs want him, they better be prepared to move quickly:

Free Agent Righty Jon Gray is Viewed as a “Good Candidate to Sign Within the Next Week” – https://t.co/NZ9fSVLDTl pic.twitter.com/rIQfUvgFv8