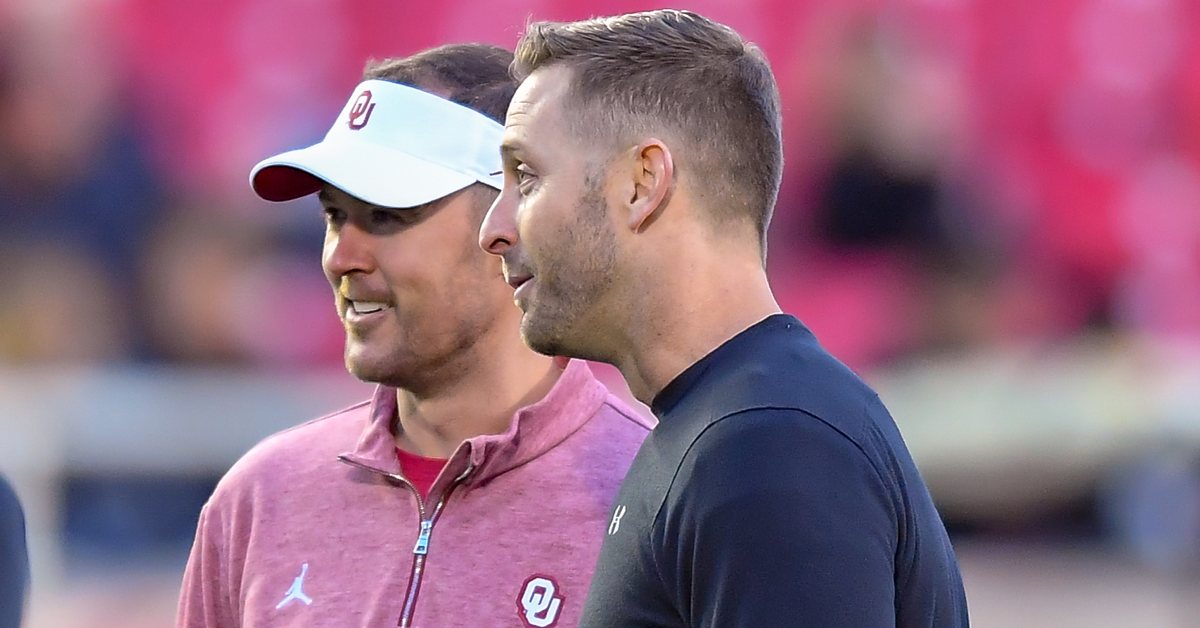 The high-profile football coaching carousel is already spinning, and it has the potential to impact the pro *AND* college games.

It begins with Lincoln Riley, who is reportedly leaving Oklahoma to take the USC job. Riley, 38, went 55-10 in five seasons at Oklahoma and put up a 37-7 record in Big 12 games leaves for the Pac-12 — just in time to miss the Sooners’ move to the SEC. But it’s not all that direct of a trip for Riley, who appears to have finessed the LSU football program that was pursuing him for its own coaching vacancy. Reports of Riley and LSU being a thing ramped up in recent weeks.

So much so, Riley had to address reports that were popping up during last night’s Oklahoma-Oklahoma State game that were suggesting he was leaving for LSU:

"I'm not going to be the next head coach at LSU. Next question."

Riley’s departure leaves OU holding the bag. Not only is the school set to leave for the SEC, it is set to do so without a head coach who sent Sam Bradford, Kyler Murray, and Jalen Hurts to the pros while at Oklahoma. That’s a mighty tall task. One that will leave the Sooners wanting to take a big swing in terms of finding a replacement.

So … why not publicly target the current favorite to win the NFL’s Coach of the Year award:

Oklahoma has targeted Cardinals’ HC Kliff Kingsbury as one of the potential replacements for Lincoln Riley, league sources tell ESPN.

Kingsbury has one year remaining on his contract after this season.

Now, that is a spicy meatball.

Kingsbury, 42, led the Cardinals to a 13-18-1 mark in his first two seasons in Arizona. But a third-year leap has launched Kingsbury’s status. The Cardinals are 9-2, leading the NFC West, and have been winning games without JJ Watt, DeAndre Hopkins, Kyler Murray, and others. If the Cards keep this up, then Kingsbury will have his team positioned for a deep postseason run. And on an individual level, Kingsbury will be lined up to land some hardware. But what about an extension?

Schefter underscores a very important nugget in his tweet, noting that Kingsbury has just one year remaining on his contract. That he mentions it in tandem with Oklahoma’s interest doesn’t feel like a coincidence. Moreover, I’d be willing to go as far as to suggest this planting of a rumor is a ploy to nudge Arizona’s ownership into getting an extension done sooner, rather than later. Leaving the NFL for a return to college doesn’t seem logical for Kingsbury. Not right now, at least. Think about it. Even if it comes with a significant pay-raise, there has to be some peace in not having to deal with college boosters, professors, or the rigors of recruiting.

I’m just saying … there is nothing like a leverage coming from a coach who knows he has options and interest elsewhere. Especially when it is leverage against an organization with just two postseason appearances since 2010.  And if I were to guess, I’d predict we’ll look back on this report later in the winter and see it as a first step toward a Kingsbury extension in Arizona. But I digress.

As we turn the calendar from November to December, expect coaching rumors to pick up more steam.

Who knows … maybe the Bears will get in on the action, too.