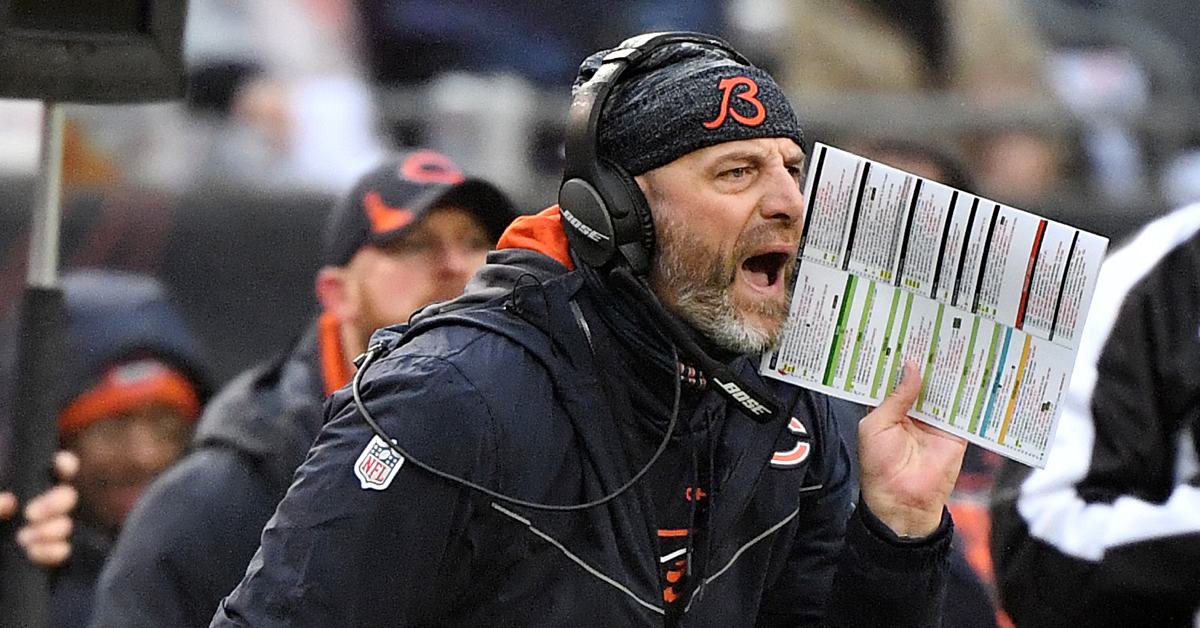 Watching the Chicago Bears offense this afternoon was like watching a taffy pull to distract you from watching paint dry. It was uninspiring. Uninteresting, too.

And for a moment, there was a thought that perhaps it was Matt Nagy’s doing:

Not that is particularly matters but sure looks like HC Matt Nagy is calling offensive plays.

Update: On the last series, Matt Nagy had a walkie-talkie in his hand and Andy Dalton was looking at him while he talked into it in-between plays. Sure looked like Nagy was calling plays again. https://t.co/B2XB08jOM7

Alas, that didn’t turn out to be the case:

Matt Nagy said he didn’t have use of his headset for most of the second half. Said he had to use a walkie-talkie to relay the play calls. Nagy says that he was not calling the plays.

Nevertheless, this game went a long way toward capturing the essence of the 2021 Bears:

⇒   This whole “is he or isn’t he?” deal when it comes to Nagy calling plays is a prime example of how dysfunctional this whole organization has been. When there isn’t strength or stability at the top, this is what it looks like. Every little detail that goes wrong ultimately turns into a bigger mess. It’s like Chief Wiggum getting stuck in the Kwik-E-Mart hot dog maker. That “this is gonna get worse before it gets better” feeling isn’t going away any time soon.

⇒   Communications failures? The Bears sell ’em by the dozen. Take your pick. This week, it’s busted headsets contributing to being unable to get plays in. Other weeks, it’s a blown coverage in the defense. Or a mistake in blocking assignments on offense. On what is seemingly a weekly basis, it’s an inability to relay pertinent injury information to reporters. Because it’s always good when the most forthcoming person in the room is a lineman who has been in town since August. Sometimes, it’s neglecting to hammer home the details, which shows up in undisciplined play. And that all pales in comparison to the failure to clearly convey a developmental plan for the rookie quarterback.

Communications failure isn’t the thing you want to be good at as a football team.

⇒   Because if having a questionable plan in place for the rookie QB wasn’t enough, why not muck up the potential franchise left tackle:

Wow. Bears coach Matt Nagy says the plan for the rest of the season is for rookie Teven Jenkins to be “depth,” which means backing up Jason Peters. Then he circled back to leave the door open for changing plans and says the Bears will make the “right” decision.

Asked if Teven Jenkins would remain in a depth role for the rest of the season, Matt Nagy said: "Most likely. I don't know for sure. We'll see."

A cohesive team that is on the same (and working) page would have put together a detailed plan of attack for Teven Jenkins’ return. Heck, a competent team would’ve had a hastily put-together plan on a cocktail napkin. But then, there’s the Chicago Bears. It feels as if there is no plan in place for the development of a rookie whose responsibilities moving forward are to protect Justin Fields’ blindside.

Then again, who’s to say whatever plan they would come up with would be the right one? There is a non-zero chance any plan they have for Jenkins might be the wrong one. At minimum, it’s tough to feel confident about any plan drawn up by a Matt Nagy-Ryan Pace tandem that needs win no matter what in what is otherwise a lost season.

At the end of the day, the Bears lost and saw their record drop to 4-8. FiveThirtyEight’s forecast gives Chicago just a 1 percent chance of making the playoffs. That doesn’t matter. Short-term focused be damned. It’s hard to even think about the minutiae of a game when the folks running the show are still in a position to do things that could be damaging beyond the present.