Mic'd Up Monty, Quinn Getting It In, NFL Germany? And Other Bears Bullets Skip to content 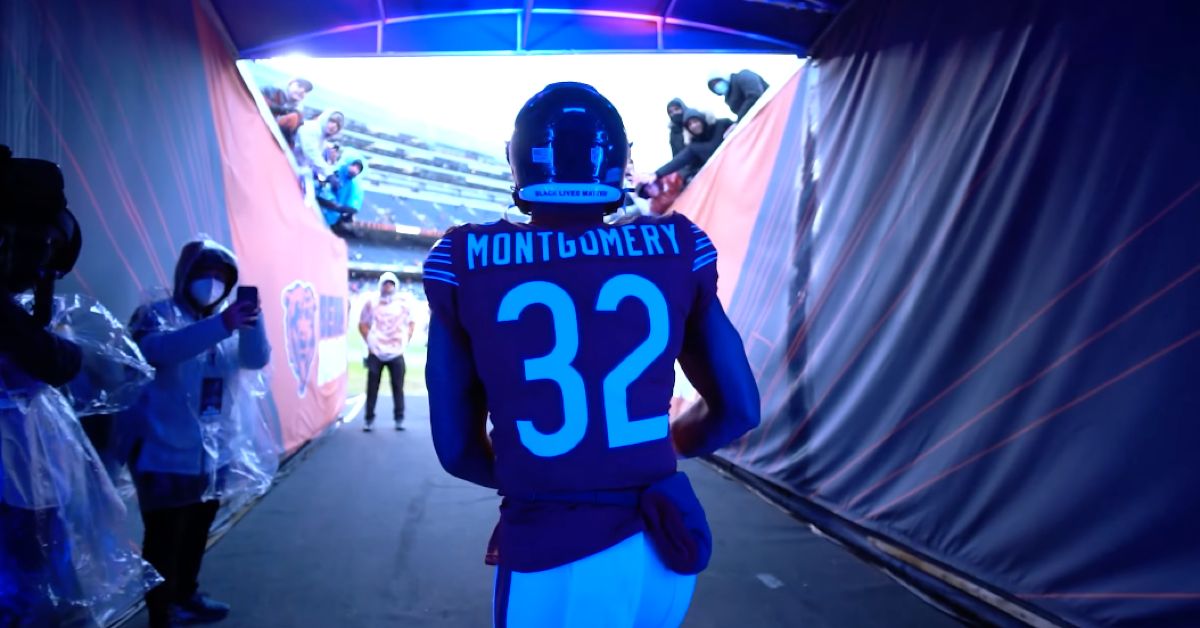 Don’t ask me why I feel this way, but I woke up thinking: Today feels like a good day to do some online Christmas shopping.

•   Here’s 5+ minutes of Mic’d Up David Montgomery giving me life on a Thursday:

•   Until Justin Fields fully gets his bearings, David Montgomery should be the face of the Bears offense. Chicago’s leading rusher is essentially this offense’s identity, and has been for a few years. With the passing game being what it is, there is nothing wrong with leaning on Montgomery to carry the offensive load. He clearly relishes the opportunity and thrives when given an increasing amount of touches. OK, fine, running the ball with gusto isn’t in Matt Nagy’s DNA. But maybe it should be in Bill Lazor’s?

•   One nugget about Fields, since he is on our mind: He was a full participant in Wednesday’s practice. That’s the best news I can share from what is otherwise a mostly dreadful injury report. I say mostly because  Montgomery didn’t practice because of shoulder/glute/groin injuries. Ugh. I guess that’s what happens when you carry too much of the load. But it wasn’t all bad. Because, in addition to Fields’ full participation, Akiem Hicks (ankle) and Allen Robinson II (hamstring) were practicing (albeit, with limitations) on Wednesday.

•   An illness kept Kicker Cairo Santos from practicing on Wednesday. With Brian Johnson off to Washington, the Bears don’t have a practice squad kicker to promote. If Santos is unavailable, the Bears could be left to try nothing but 2-point conversions on Sunday. Admittedly, there are reasons to doubt the Bears will even need a kicker on SNF. But now I’m thinking about Matt Nagy emptying his bag of trick plays in front of a nationally televised audience.

•   Robert Quinn is so good, the NFL is crediting him with sacks on his day off:

Robert Quinn, the NFC defensive player of the month for November, got off to a good start in December with a stat adjustment that credits him with a sack of Kyler Murray. https://t.co/VXAbMchvfM

•   This man has been bagging up bodies throughout The Robert Quinn Revenge Tour™. He got 3.5 on Tyler Huntley, two on Joe Burrow, two more on Jared Goff, one on Kyler Murray, Aaron Rodgers, Ben Roethlisberger, and Baker Mayfield. That’s a quality list of QBs. Shame he was a credited with just one-half sack on Matthew Stafford in Week 1.

•   My new goal in life is to find someone who loves me as much as NFL schedule makers love putting the Bears-Packers games at Lambeau Field on in prime-time. Jon Greenberg (The Athletic) serves up a reminder that since 2009, there have been just two day-time Bears-Packers games at Lambeau Field. Everything else has been on Sunday Night Football (five times), Thursday Night Football (four), and one Monday Night Football experience. I get it. Lambeau Field hits different at night. Trust me, as I speak from experience. I was there for the SNF lid-lifter in 2018. And even though the Bears lost that one, I came away with good experiences. That tailgate is something unlike I’ve never been apart of before in my life. But Chicago at night is pretty cool, too. Just sayin’…

•   Sure, I realize Jimmy Graham’s production isn’t where anyone wants it to be. But the football calendar year can be a drag, especially when the Bears aren’t producing wins. With that in mind, it’s nice to keep some perspective that there are things bigger than football:

•   A relatable quote. For many reasons:

Does Tashaun Gipson know Aaron Rodgers at all?
“Oh no, man. We live two different worlds, man… I’ve talked to him during the games, just minor here & there."

“Two different worlds, man. For many reasons. I’ll tell y’all that much.”

•   Love that “Once a Bear, Always a Bear” isn’t just a thing we say as fans. We’re about that action. That’s one reason why Cordarrelle Patterson is getting hella Pro Bowl votes. Let’s keep ’em coming for a popular former Bear, especially one who appreciates our support:

•   It is probably too early to forecast who will be starting in Week 17, but the idea of Jake Fromm vs. Justin Fields makes Giants-Bears a heckuva lot more interesting than a game between two teams battling at the bottom of the standings should be. Fromm, who replaced Fields as Georgia’s QB when they were both with the Bulldogs, was reportedly taking most of the practice snaps for the Giants on Wednesday and could start Sunday’s game against the Chargers.

•   Well, this is certainly interesting:

•   Maybe these are words are inspired by having a new passport and an itch to travel internationally, but I kinda dig the effort to expand the game globally. The Bears are no strangers to Germany, spending some time during the offseason to visit U.S. troops in 2013. And in 1991, the Bears played a football game at Olympic Stadium in Berlin. According to the LA Times reporting archives, it was ugly.

And a highlight reel for the ages.

•   Among today’s Daily Deals at Amazon is the Eero mesh wi-fi system, which gets Brett’s recommendation and has me thinking about snagging one for my place.

The Fighting Illini Are Putting Ayo Dosunmu’s Jersey in the Raftershttps://t.co/ChfdQ46X2Z

•   Remembering that Tony Campana was “a thing” really takes me back: