An All-Pro on the Field, Demaryius Thomas Remembered as a Dear Friend to Many Skip to content 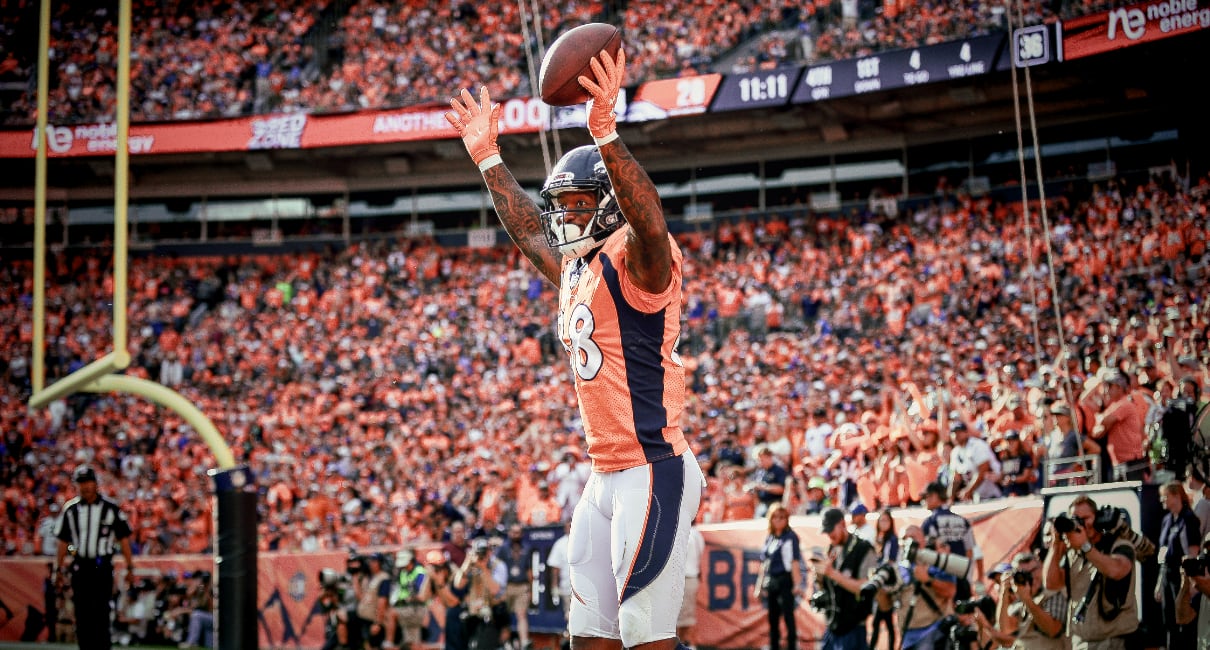 We don’t know the professional athletes that we watch. Not personally, at least. We might have met them in passing, gotten an autograph or a photo, or even covered them professionally. But, we don’t know them. Not really. And yet, sometimes, it feels like we do, right? The emotional bond many of us have with sports often makes our relationships with these players feel very real. That’s why, when a player passes away, you often feel like you lost a friend. A friend to many was Demaryius Thomas, a 33-year-old now gone too soon.

Benjamin Allbright reported this morning that Thomas died in his home from a seizure resulting from medical complications from an automobile accident in 2019.

We are devastated and completely heartbroken.

Demaryius' humility, warmth, kindness and infectious smile will always be remembered by those who knew him and loved him. pic.twitter.com/0GLZIr6UP3

Thomas was an exceptional talent on the football field for the Georgia Tech Yellow Jackets, the Denver Broncos, Houston Texans, New England Patriots, and New York Jets. The bulk of his playing career was spent with the Denver Broncos, where he ascended to the top of their franchise leaderboards in multiple receiving categories. In his nine years in Denver, Thomas caught 665 passes (3rd) for 9,055 yards (2nd) and 60 touchdowns (2nd). Only Rod Smith and Shannon Sharpe can be mentioned in the same breath as Thomas when it comes to Denver receiving records. Both Rod Smith and Shannon Sharpe also had John Elway throwing them passes for much of their careers.

Thomas made four Pro Bowl appearances and was twice named a second-team All-Pro wide receiver during his time with the Broncos, and like Rod Smith and Shannon Sharpe before him, he won a Super Bowl in Denver.

For as impressive as Demaryius Thomas was on the field, you don’t have to ask around for too long before you begin to realize that he was even more special off the field.

Thomas had a childhood that would make it understandable if he didn’t become the amazing human that he did. As a child, police raided his house and arrested his mother and grandmother for crack cocaine distribution. The two female role models in his life were sentenced to two decades in prison, and Thomas spent the rest of his childhood with his aunt and uncle. It wasn’t until January 17, 2016, that Thomas’s mother, Katina Smith, got to watch her son play football in person. Thomas and the Broncos beat Pittsburgh in an AFC Divisional Round matchup to advance to the AFC Championship. Demaryius caught four passes for 40 yards on that day.

Peyton Manning’s twins were devastated when Thomas was traded to the Houston Texans during the 2018 season. Marshall and Mosely waited outside the visitor’s locker room at Broncos Stadium at Mile High to see Demaryius after the Texans played the Broncos the week after Thomas was traded to Houston.

Thomas spent his final season in the NFL with the New York Jets in 2019. His time in New York was another piece of evidence to the person that Demaryius Thomas was beyond the football field. Thomas joined the Jets in September, and by November, he was named a team captain by his teammates.

Horrible news: ex-#Jets WR Demaryius Thomas has passed away at the age of 33.

He spent his final season in the #NFL w/ Gang Green. A really good football player & an even better human being who was widely respected in the locker room. RIP brother. pic.twitter.com/fJtAg8NHLY

Thomas’s time with the Jets came months after reaching a plea deal on reckless driving charges stemming from a February 2019 crash in Denver. I’m sure because this is the world we live in today, there will be someone who points to this accident as a blemish on Thomas’s otherwise pristine resume on and off the field. Thomas was a human being just like you and me, and just like you and I, his story was not perfect. He made a mistake, and he got on with his life.

Thomas would play 11 games for the Jets in 2019 and caught 36 passes for 433 yards and one touchdown in what would ultimately be his final NFL season. But, as I said, it was Demaryius’ impact off the field that was felt by seemingly everyone he came into contact with. I’ll let them do the talking from here.

I am devastated right now. We spoke back in 2019 and you told me how excited you were to be a NY Jet. You gave my son a high five during pre-game. Appreciate you making his day. You were a great player. Prayers to you and your family. Rest Easy! @DemaryiusThomas pic.twitter.com/0EQQZndA0p

I thank you for all our talks!! You touched so many people! You will be missed by us all. 🕊🙏🏾🖤🤞🏾 pic.twitter.com/5rj65tcUeZ

Peyton Manning (1 of 2): “D.T. was a better person than he was a player, and he was a Hall of Fame player. That tells you how good of a person he was. He treated my kids like they were his own. He was there for every teammate’s charity event. …” https://t.co/ZxXyaatzR6

Woke up and saw the really devastating news about my teammate and friend, Demaryius Thomas. So many are going to remember him for his athletic ability… but I’ll be remembering him for his kindness, his smile that would light up a room, and the love he had for those in his life. pic.twitter.com/gNVzmJ503X

Demaryius Thomas’ football feats were incredible, but this is the man I’ll remember: The guy who was kind, always smiling, who was Uncle DT to so many kids, and who was always thoughtful and sincere in our professional relationship. pic.twitter.com/F5q1qDLVEw

I met Demaryius Thomas when he was at Georgia Tech – painfully shy and incredibly sweet. He grew so much as a person but never lost that sweetness & kindness.I asked him if he was happy and this was the picture he sent me. This smile truly epitomizes his light. Devastating. pic.twitter.com/nvIj0btlVU

Most people saw what Demaryius Thomas could do on the field. Off the field, he was even more special.

These are just some of the videos I still have on my phone that swore I never would delete. Being around little kids was when Demaryius seemed the happiest. pic.twitter.com/E1UIXigpIJ

The sports world mourns the loss of Demaryius Thomas… 🕊️

We are mourning the tragic passing of Demaryius Thomas and sending our deepest condolences to the Thomas family and his loved ones.

The Demaryius Thomas news is so sad. He overcame so much to earn all that he did, and to be gone so young, with so much left to do is truly a tragedy. What an amazing athlete and and even better human. R.I.P DT 🙏🏾

Peyton Manning’s message to Demaryius Thomas when he retired earlier this year. All the feels 😢 #RIPDT pic.twitter.com/k4eEz2aw9R

“He was full of personality… a great dude, great teammate, [and] loved his family."

The entire NFL family sends their condolences to all those who loved and knew Demaryius Thomas. pic.twitter.com/cusA8nWfe1