Around the NFL: Herbert and the Bolts Roll, Steelers Stayin' Alive, Denver's Tribute, Every Touchdown, More Skip to content 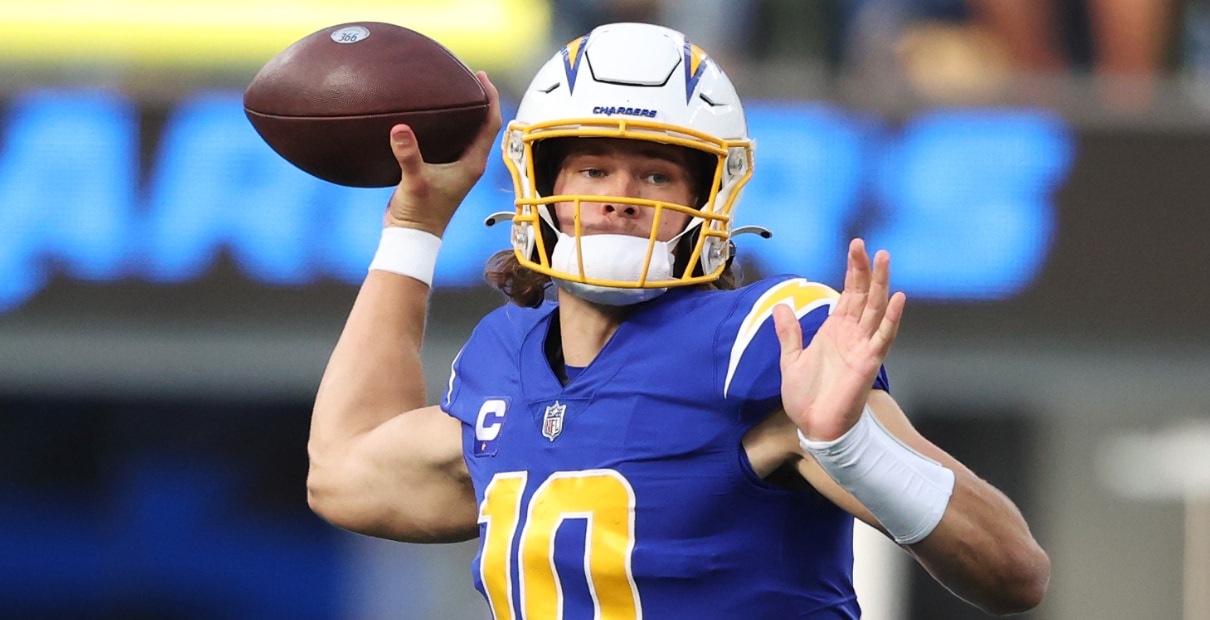 Week 14 was chocked full of playoff implications, celebrations, tributes, and touchdowns, and we’re going to touch on all of it in today’s Around the NFL. But, first, let’s get that heartbreak out of the way. Well, it’s more like expected agonizing torture bordering on hysterical laughter than heartbreak at this point, but you get what I’m saying.

•   That was fun. For a little while anyway.

How many times have we seen this? @AaronRodgers12 @tae15adams #GoPackGo

Matt Nagy is now 1-7 against his Dad. pic.twitter.com/v4x4UpzWS0

•   As always, Luis has this one pretty well covered, so we’re going to move onto the rest of the fun from around the league in Week 14.

•   Justin Herbert is freaking awesome, and the Chargers have their quarterback of the future in this kid. It’s really something, almost maddening as a Bears fan that the Chargers were able to find their next franchise quarterback seamlessly after the departure of the last franchise quarterback. Phillip Rivers plays 16 seasons (14 as the starter after Drew Brees departed for New Orleans) with the Chargers and wins them 134 games and save for the two games that Tyrod Taylor started last season; Justin Herbert will be there for the next decade-plus. Not only that, but Herbert is already better than Rivers ever was. Good for the Chargers, honestly. I’m happy for their fan base.

•   Herbert and the Chargers topped the Giants 37-21 on Sunday to move to 8-5 on the season. Herbert threw for 275 yards and three touchdowns in the victory over New York.

.@MikeEvans13_ climbed the air for that TD 🧐@Buccaneers | #GoBucs

•   Despite a second-half comeback that would push the game into overtime, Tom Brady did Tom Brady things in the end. The Bucs topped the Bills, and Buffalo has now lost three of their last four games and are just one game above .500 at 7-6.

•   Brandon Aiyuk and the 49ers topped the Bengals in overtime in Cincinnati on Sunday, denying the Bengals an opportunity to leapfrog the Baltimore Ravens in the AFC North. The 49ers move to 7-6 with the win and are in the mix for one of the NFC Wild Card spots heading into the season’s final month.

•   The Bengals had a shot to take over first place in the AFC North after the Ravens lost to the Cleveland Browns on Sunday. Still, the loss for Baltimore might be the least of the concerns for the Ravens after starting quarterback Lamar Jackson was carted off the field with an apparent ankle injury in the losing effort.

•   Jackson was in a walking boot after the game, and ESPN’s Dianna Russini reports that the Ravens expect Jackson to have a low ankle sprain.

The Ravens want to see how Lamar Jackson feels tomorrow before any decisions or tests go down.
I was told they are expecting it to be a low ankle sprain, per source. Here is Jackson in a boot. pic.twitter.com/0TXXOwk4GV

•   Remember last week when I said that the Chiefs were back? Yeah, they’re definitely back.

That's the definition of a team win 🔥 pic.twitter.com/0QnygPH8QD

•   Patrick Mahomes and the Chiefs made history against the Raiders. The 48-9 blowout was the largest victory over the Raiders in franchise history and the biggest win against any opponent since 2006. For Mahomes, his 258 passing yards moved him ahead of Alex Smith on the Kansas City all-time passing leaderboard.

•   With the Bills, Bengals, Ravens, and Raiders all losing on Sunday, Big Ben and the Pittsburgh Steelers are still alive despite their Thursday night loss to the Minnesota Vikings.

The Bengals, Bills, Raiders and Ravens lost. The Steelers are "Stayin' Alive" 🤣 pic.twitter.com/5OmpELFtyT

•   Shifting gears, the Denver Broncos opened their game against the Detroit Lions with a heartfelt tribute to the late Demaryius Thomas by lining up with ten men on the field.

The @Broncos lined up with 10 men on the first play of the game in tribute to Demaryius Thomas 🙏 pic.twitter.com/nL6RxGx7Bj

•   The Broncos lined up without Thomas’ X-receiver position occupied and took a delay of game as the Denver faithful roared in applause and Detroit fittingly declined the penalty. Thomas passed away on Thursday at the age of 33 after suffering a seizure in his home.

•   After the Lions declined the penalty, the Broncos drove down the field and took a touchdown lead on the game’s opening drive. Javonte Williams capped off the drive by powering his way into the end zone in what would become the theme of the afternoon in Denver.

•   Williams and fellow Broncos’ running back Melvin Gordon III combined for 194 rushing yards and four touchdowns on 40 attempts on the ground as Denver rolled over the Lions 38-10.

•   Dak Prescott wasn’t great, but the Cowboys found a way to pull out a 27-20 victory over the Washington Football Team on Sunday, pretty much locking up the NFC East in the process as they moved to 9-4. Dak and the struggling Dallas offense owes Greg Zuerlein (four field goals) and the defense a steak dinner after this one, though.

RT to show the #DallasCowboys Defense some 💙#DALvsWAS | 📺 : @NFLonFOX pic.twitter.com/VdHi7Q2j5H

•   Seattle topped the lowly 2-11 Houston Texans in a 33-13 laugher. Rashad Penny had himself an afternoon, rushing for 137 yards and a pair of touchdowns in 16 carries.

•   In the week’s irrelevant bowl, the Falcons topped the Panthers 29-21. Cam Newton threw for 178 yards and threw an interception in the loss. Cordarrelle Patterson did contribute 13 points to my fantasy football team this week, which is about the only reason that I even remembered that this game took place, so thanks for that, Cordarrelle.

•   We wrap this one up by checking in on the NFL’s most enormous dumpster fire, the Jacksonville Jaguars:

The Bears have more return yards at halftime (213) than the Jaguars had total yards today (192) pic.twitter.com/zsIhpMz8Ym

Every touchdown from NFL RedZone in Week 14! 🙌 pic.twitter.com/Dx7JfGcGq6

•   Week 14 wraps up with a heck of an NFC West battle between the Rams and Cardinals in Glendale!

Scale of 1-10, how excited are you for this game? (by @mercedesbenz)