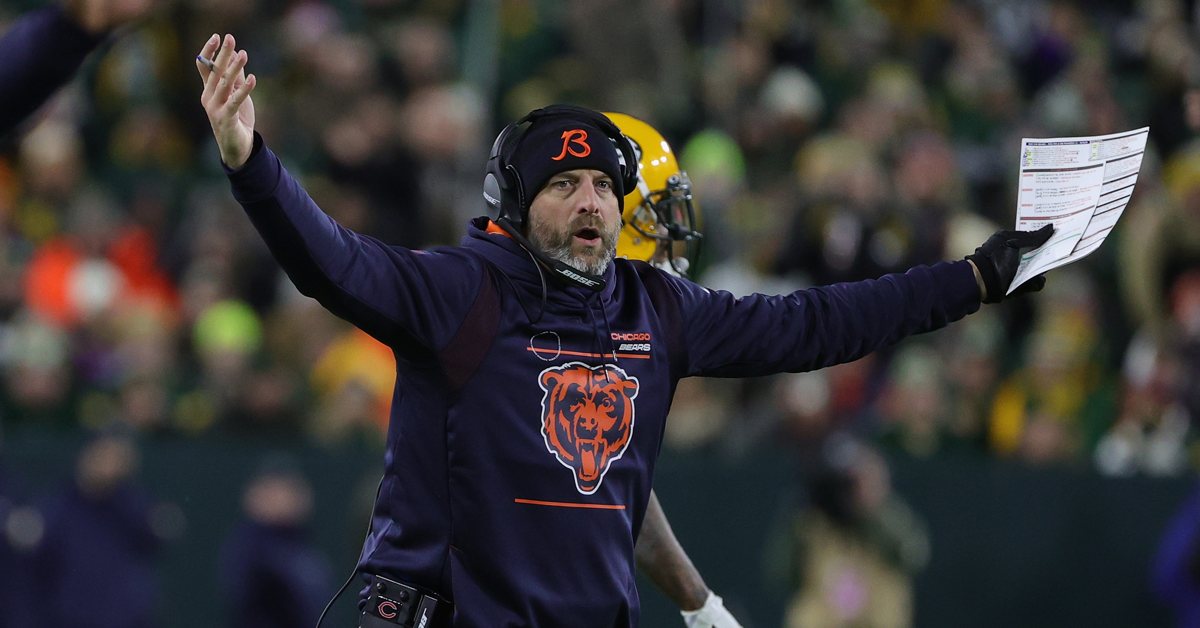 Hang with me, friends. We’ve got just four more games.

•   Imagine you were hosting aliens who were teleported onto this rock floating in space for last night’s Bears-Packers game. You are responsible for teaching them everything you knew about football. And before the game, you spend a chunk of your time laying out why GM Ryan Pace and Head Coach Matt Nagy are both on the hot seat and that both need to go. After the first 30 minutes of that game, trying to back up those thoughts would’ve been a challenge at certain points. The Bears had a six-point halftime lead. Touchdowns were scored by the offense and special teams. Things were looking all right. But then you explain to your intergalactic friends that they don’t play 30-minute games. Then the second half begins…

•   The Bears took a 27-21 halftime lead, then watched the Packers score 24 of the next 27 points in that game. And now, your extraterrestrial friends probably don’t want to watch football ever again.

•   In an alternate universe, this factoid makes me give up watching Bears football and allows me to pursue a newfound passion — building model Millennium Falcons on Sundays:

The #Bears had 2 net yards of offense in the third quarter. The Packers? 149.

•   Frankly, I can’t blame them for feeling that way. Especially if they were watching the NBC broadcast with the sound on.

•   Here is a not-so-fun fact about the Bears’ second-half issues against the Packers. Throughout the duration of the Bears’ active six-game losing streak to Green Bay, Chicago’s football team has been outscored 83-38 in the second half. The Bears have been outscored in the second half of all but one of these contests. And in the one game in which the Bears *DID* post more second-half points than the Packers, it was a 15-14 margin — that came *AFTER* the Packers had built a 41-10 lead after three quarters.

•   Oof. The NBC crew had one of the strangest broadcasts of a SNF game all year. And while they had a weird game to work with, it doesn’t excuse some of their presentation. At the top of my list, is Lovie Smith not deserving to be lumped in with the rest of these mopes:

•   Producers had a real opportunity to drive home some good, active, and relevant narrative. Such as how the two head coaches brought in by Ryan Pace — John Fox and Matt Nagy — have gone  2-12 against the Packers since 2015. And when they were showing a triple shot of Pace, Nagy, and George McCaskey, that might’ve been a good time to point out how the Bears were 3-17 against the Packers since McCaskey became team chairman. There was plenty of content to offer up and frame for viewers who fall in both the die-hard and casual columns. Instead, it was pure silliness for a healthy chunk of the night. Maybe that is fitting?

•   When seeing NBC do live-shot cutaways to Virginia Halas McCaskey and George McCaskey, I couldn’t help but wonder what they were thinking while watching that game. Better yet, how can the two people highest up on the chain of command in Bearsland watch that and maintain the status quo. The urge to make the two key components associated with putting together that roster walk home from Wisconsin would’ve been too much for me.

•   But at least Matt Nagy was having fun:

•   There’s plenty of quality perspective from the eyes-on reporting at Lambeau Field from Chris Emma (670 The Score), Kevin Fishbain (The Athletic), Dan Wiederer (Tribune), and Jason Lieser (Sun-Times). There is plenty to unpack, so take your time with this one.

•   At least it feels like changes are coming, even if Trace Armstrong isn’t the one calling the shots.

There’s a Lambeau parking attendant wearing a Walter Payton jersey today. That dude has the guts.

Me: Do they care you wear a Bears jersey?
Lambeau parking lot guy: How good they get mad at (Payton)? … They cared a little bit. pic.twitter.com/caAWoczx4m

•   This was fun for the half-moment in which I thought this was a Bears touchdown:

•   At what point do we talk about how there is a non-zero chance the Packers’ special teams unit will cost them during the postseason. Or are we already resigned to the fate that everything works out for this franchise, no matter how questionable it looks? Their recent drafts have been widely panned by people far more knowledgeable than me when it comes to draft-pick value. And yet, their depth is fine and their picks work out. It’s basically like watching everything work out for Logan Roy despite his obvious role as ultimate baddie.

•   Seeing this after the Ticky-tack call Kindle Vildor took had me thinking of a Chris Rock line from the movie Down to Earth in which Rock’s character, going through a string of unlucky occurrences, says something that boils down to: “Why is it that when it’s bad, it’s fate … but when it’s good, it’s luck?”

Really bad look for @NFLOfficiating calling the one on Kindle Vildor but not this one. About the same amount of contact, but at least Vildor got back inbounds right away. https://t.co/8CKH9x7v6F

•   Sure, I get that you make your own luck. And that when you give up 45 points, things aren’t going your way in the first place. But it is becoming such a drag to watch things go against the Bears. They’ve got enough issues without bad luck.

•   Breshad Perriman wasn’t good enough to be active at any point during his Bears career, but catches a game-winning touchdown from Tom Brady. Yeah, that’s just how things are going for these Bears in 2021:

Breshad Perriman, who began the season with the Bears and was inactive until he was cut before Week 9, just walked it off for the Bucs. pic.twitter.com/e8rUFvg1JT

•   Tons of Daily Deals today at Amazon, from toys to watches to cookware to art supplies to tools and more. #ad

•   Marcus Freeman, a fifth-round pick by the Bears in 2009 who now coaches Notre Dame’s football team, reflects on what he took away from his brief Bears experience:

“You learn how to take defeat.” – Marcus Freeman, asked about what he learned during his time with the Chicago Bears

•   Freeman, who I had no recollection was even on the team at any point in his life, was waived by the Bears on Sept. 4, 2009. It came one day after the team completed a 3-1 preseason. That 27-20 loss against the preseason Bills must’ve been an epic one.

•   If you want a trip down memory lane, you’l want to check out some of the names in that Bears-Bills preseason game story. There are some doozies in that group. And it sure beats the alternative of spending more time thinking about that Bears-Packers game.