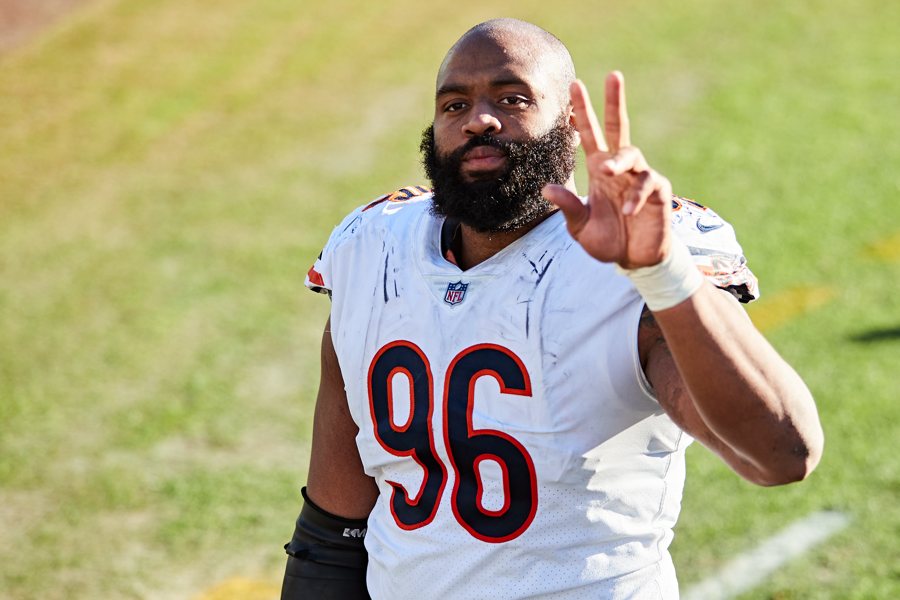 Think about this; 123 tackles, 22 tackles for loss, 13.5 sacks, 26 quarterback hits, two forced fumbles, and two fumble recoveries. That’s what the trio of Akiem Hicks, Bilal Nichols, and Eddie Goldman did in 2018 when the Chicago Bears touted the NFL’s best scoring defense, a defense that helped Chicago win 12 games and an NFC North title in Matt Nagy’s first season as the head coach.

Just four years later, it appears that the Matt Nagy era in Chicago is coming to an end, and it’s also very possible that the three stalwarts of the Bears’ defensive line during the Nagy era will be gone as well. Akiem Hicks and Bilal Nichols will be free agents after the Bears wrap up the season, and a declining Eddie Goldman is a cut candidate with an $8.6 million savings if the Bears cut him after June 1st.

For years, Akiem Hicks was arguably the face of the Bears defensive unit, but his departure is all but a forgone conclusion at this point, and the writing has been on the wall for some time now.

Hicks, 32, hasn’t played since November 8 when the Bears lost to the Pittsburgh Steelers on Monday Night Football, and the veteran lineman has missed seven games in all this season with multiple nagging injuries. Hicks has been with the Bears since the 2016 season and has 228 tackles and 29 sacks in a Bears uniform. Still, his age, cost, nagging injuries, and natural decline has led to an inevitable unceremonious divorce between the two sides. In seven games this season, Hicks has only 18 tackles, three quarterback hits, and 1.5 sacks, evidence of the nagging injuries and decline of Hicks, who is making $10.5 million this year.

Don’t get me wrong, I love Akiem Hicks as a player. He’s a dedicated teammate, a fierce competitor, and probably still has a few more years left in the tank if he can remain healthy, but it won’t be in Chicago at the cost he’ll demand.

As for Bilal Nichols, he was a steal of a draft pick for Ryan Pace, who selected the former Delaware Fightin’ Blue Hen with the 145th pick of the 2018 NFL Draft. Nichols has racked up 130 tackles, 18 tackles for loss, ten sacks, 25 quarterback hits, three fumble recoveries, and a pair of forced fumbles in 56 for the Bears and is on pace to eclipse his career-high 40 tackles from last season with 35 tackles already this season when he returns from the COVID IR.

Nichols has the best shot of staying in Chicago as a 25-year-old defensive lineman with his resume and his reasonably impressive track record of being able to stay on the field. Still, with a new regime likely coming into the fold at Halas Hall, whether it be limited to the coaching staff spanning beyond, it’s hard to be confident that Nichols will fit into their plans, especially at the increased price tag he will command this summer. Over the Cap has Nichols’ 2021 valuation at $6.1 AAV, which is among the top-third of all interior defensive linemen (as OTC classifies Nichols) eligible to reach free agency this offseason. Surely the Bears can find a comparable replacement for Nichols at a lesser cost for a defense that will be re-shaped over the next couple of years.

Just a couple of examples of cheaper solutions than Bilal Nichols available this offseason; Jarran Reed has posted numbers similar to Bilal Nichols over his six years with Seattle and Kansas City and is valued by OTC in the $4.4 million range as a free agent this offseason. Rams’ defensive tackle Sebastian Joseph-Day will be a free agent, valued in the $3.8 million ballpark, recovering from surgery to repair a torn pectoral. There will be cheaper solutions available at that position, and let’s be honest; the Bears need to immediately invest cap space in other areas. Let’s start with the offensive line that has done nothing in the way of protecting Justin Fields this season. But, while I think it’s a good possibility that Nichols walks, I won’t rule out a return.

While Nichols has a shot at returning next season, Eddie Goldman, like Akiem Hicks, is all but gone at this point. Goldman has seen a decline across the board since 2018, when he logged 40 tackles, three sacks, and one fumble recovery. Goldman played 15 games in 2019 and logged just 29 tackles and one sack before sitting out the entire 2020 season after opting out due to COVID-19 concerns. Goldman has played just six games this season, logged an underwhelming 18 tackles and a half-sack, and now finds himself on the COVID IR heading into the final month 0f the season. That $8.6 million cap saving sounds real good right about now, doesn’t it?

The trio of Hicks, Nichols, and Goldman defined the interior of a feared defensive line a few years ago. Still, the Bears defense just hasn’t displayed the staying power that we all hoped it would, as regression has been widespread and rapid over the past two years. Coupling the decline and the impending change at Halas Hall, it sure looks like there’s going to be change on the horizon for the Bears up front on defense.