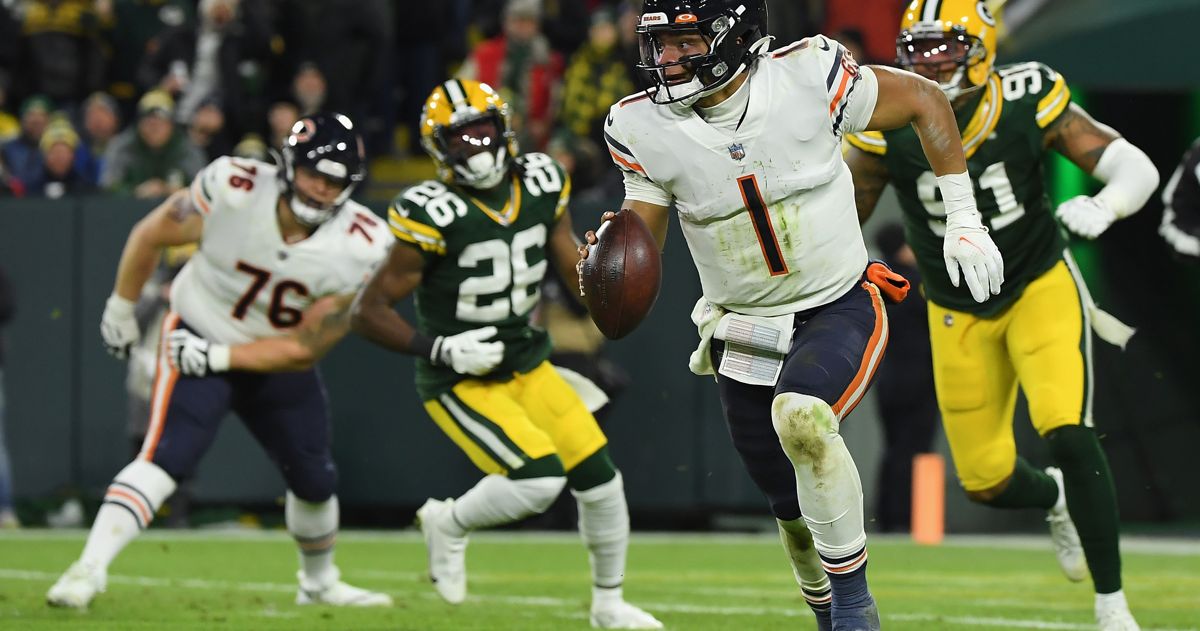 I have playoff teams in three of the four fantasy football leagues I’m in this year. And in two of those leagues, I’m favored to win. I’m awesome.

•   One thing the Bears were able to add this offseason was speed. It was a long overdue upgrade in this department, especially when considering the coach had been hinting the team was needing more of it over the years. But between the GM failing to find it in waves and the coach’s inability to use it in games, it should come as no surprise it took until Week 14 for us to see it at its best:

•   Jakeem Grant Sr. won the NFC’s Special Teams Player of the Week award for his efforts in Green Bay. And with good reason. Grant’s 97-yard punt return touchdown was the first punt to be taken to the house for a score this year. With each year that goes by, success in the return game becomes tougher as rule changes and tweaks make it more challenging. But Grant’s speed and quick-twitch ability is special. His return score was something out of Devin Hester’s playbook, so it’s only fitting Grant is the first Bears return specialist to win the award since The Greatest to Ever Do It won in Week 2 of the 2013 season.

•   It also inspired one of Jeff Joniak’s best calls in recent memory:

•   Grant had himself a day on Sunday, and it looks even cooler in dot form:

Jakeem Grant reached a top speed of 21.33 mph on this 97-yard punt return TD, the fastest play by a #Bears ball-carrier this season.

Three of the Bears' five fastest plays by ball-carriers this season have come tonight in the 2nd quarter.#CHIvsGB | Powered by @awscloud pic.twitter.com/uUqLTfr3FG

•   The Bears are a special teams powerhouse:

•   Grant’s contract expires at year’s end, and my football brain is trying to compartmentalize how to keep him in the fold. The Bears made a misstep last offseason in allowing Cordarrelle Patterson to walk. Not to say retaining Patterson would’ve led Chicago out of the hole it dug itself. However, we’ve seen what it looks like when you’re missing a player who can contribute in multiple aspects of offense and special teams. The Bears depth has taken a hit this year, and it would’ve been nice to have one singular player who could check multiple boxes. Should Grant continue to carve a niche for himself on offense and special teams, the Bears should try to make sure he doesn’t hit free agency.

•   Then again, who’s making those calls? It really seems like the Bears are on the cusp of significant organizational changes.

•   Ah, yes, the other receiver on the brink of free agency:

Should the Patriots target Allen Robinson in free agency? 👀 pic.twitter.com/heft8Hf3mq

•   The offseason rumor mill in 2018 was wild in making connections with Dolphins receiver Jarvis Landry and the Bears. It made sense, too. Landry was seeking a new football home, while the Bears were a receiver-needy team. There was even a thought that Chicago could land both Landry and Allen Robinson II. However, despite plenty of chatter, Landry ultimately was dealt to the Browns. Miami was able to recoup picks in the fourth and seventh round in that upcoming NFL Draft. And now I’m thinking about how the Bears could follow that blueprint with Robinson. After watching this season unfold, it is becoming painfully obvious a mutual split would benefit both sides.

•   While the winds of change begin blowing at Halas Hall, one constant figures to remain in the coming years:

Rotation is important for all throwing athletes, especially those recovering from any type of rib injury. Reestablishing the connection is 🔑 pic.twitter.com/rKSQm2qP7X

•   There is no quit in Justin Fields. His striving to constantly work to be better is impressive and respectable. Your favorite NFL team will go only as far as its quarterback does. And so long as your quarterback has high-end talent and a work-ethic to match, then it’s easy to dream on a bright future — even as you crawl through the darkest days.

Bears beat the Browns 38-31 behind 3 TDs from Jay Cutler.

•   While the Bears battle through being in “enhanced” COVID protocols, the league continues to fight through a new wave of player positives:

NFL now has had 75 player positives for COVID the past two days, per source.

•   Televising “The COVID Protocols Bowl” between the Bears and Vikings isn’t what ESPN’s executives had in mind when choosing this game.

•   Ownership speaking candidly and openly about a tumultuous situation is refreshing:

•   Also … let’s keep some perspective here. Things stink with the Bears right now. But the Jaguars situation is on its own level and in it own stratosphere. So to see the mere mention of Matt Nagy and Urban Meyer being cut from the same cloth is insulting. For all his flaws, Nagy isn’t Meyer. There isn’t public bus-tossing of assistants. Or rumored favoritism for an old college chum. And there certainly isn’t the cringe-y off-the-field drama that might make for grounds for firing. Nagy and Meyer are football coaches whose teams will likely look to move on at year’s end. But that is where the similarities end.

•   I see the NFL isn’t alone in having COVID concerns:

•   Other than Michael Jordan, there hasn’t been a more influential basketball player to come from my generation than Stephen Curry. So, I consider myself lucky to have seen both at the peak of their powers: