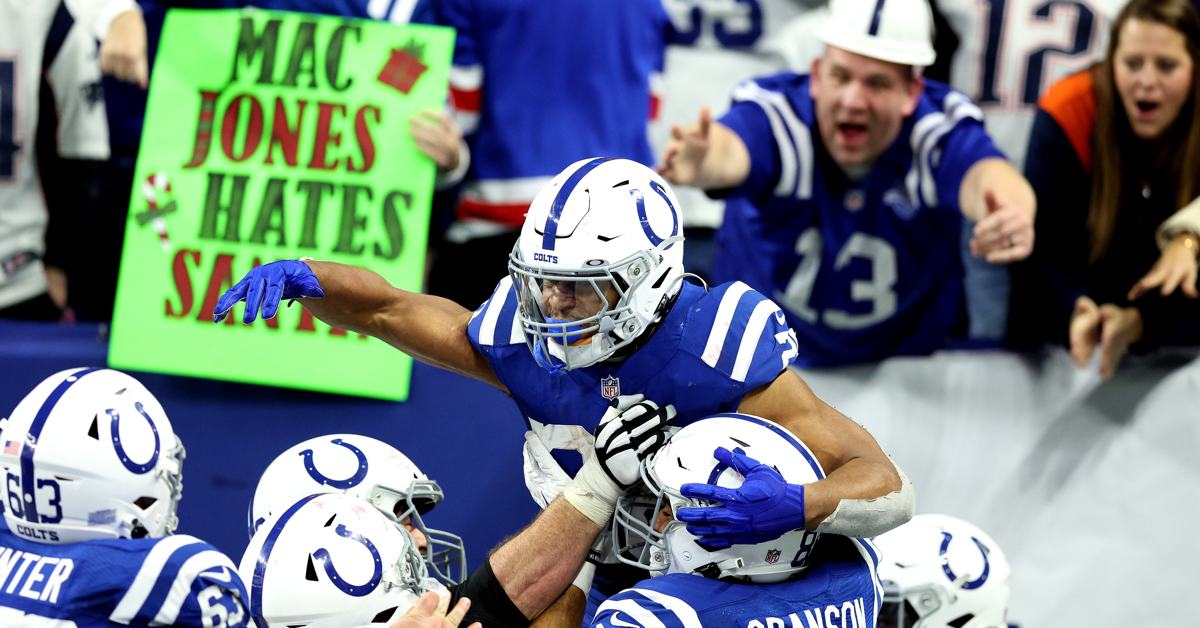 Fantasy football playoffs are well underway, so make sure your lineups are set ahead of Sunday’s action. I’d hate to find out you forgot to set your lineups at the worst possible moment.

•   One of the hardest things to do in football is running it when everyone on the field, in the building, and watching at home knows you’re about to run it. And yet, Jonathan Taylor made it look so easy:

Jonathan Taylor reached a top speed of 22.13 mph on his 67-yard game-clinching TD run, the fastest speed by a ball-carrier this season.

Taylor is now responsible for three of the top 5 fastest plays with the football this season.#NEvsIND | #ForTheShoe pic.twitter.com/RaBQngtWF6

•   Taylor had 29 carries and 170 rushing yards, with the 67-yard scamper shown above being the back-breaker. The Wisconsin product is having an MVP caliber season. And while the award will almost certainly go to a quarterback, that we’re even discussing Taylor as a worthwhile candidate speaks volumes of the seasons he is having. Moreover, it says a lot about what Frank Reich has done in transforming that team. Reich should get some NFL Coach of the Year votes at year’s end for this bang-up job.

•   Speaking of coaches, I wonder if we should be adding Matt Eberflus to our Bears coaching candidate watch list. More on that later today. Just know that putting Mac Jones and that offense in a Snuggie® and out-scheming Bill Belichick in a prime-time game was most impressive.

•   As for current Bears coaches, there is finally clarity regarding who will serve in coordinator roles if Bill Lazor, Sean Desai, and Chris Tabor are unable to coach on Monday Night Football because they can’t clear COVID protocols:

⇒   The team announced John DeFilippo will take Lazor’s place as offensive coordinator. And as far as I’m concerned, I hope DeFilippo gets lead play-caller duties. Remember when the Bears had DeFilippo in for a head-coaching interview in 2018? I know I do! Or when Gardner Minshew II posted a 91.2 passer rating, a 3-1 TD-INT ratio, and more than 3,200 passing yards as a rookie with the Jaguars in 2019? DeFilippo was calling the shots back then.

⇒   Mike Pettine takes over as the defensive coordinator. Pettine, who came on this season as a Senior Defensive Assistant after three years running the Packers defense, has extensive experience as a defensive play-caller. He also has head-coaching experience. That feels noteworthy, just in case Matt Nagy is unavailable for any reason down the stretch.

⇒   Brian Ginn is set to run the special teams unit. I suppose Ginn, who has prior experience coaching receivers, running backs, quarterbacks, and tight ends while at Delaware makes him uniquely qualified to handle players from all sorts of position groups if push comes to shove.

•   Wouldn’t it be something if this came to fruition?

Justin Fields can steal it pic.twitter.com/4wRrInCVyf

•   If it wasn’t for Taylor’s magical run, we’d likely be spending a chunk of time discussing this:

Hines finds the endzone with a little help from JT. 😤

•   Which was inspired by this:

I’ll pay Frank Reich $20 if he rolls out the Philly Special Saturday against New England.

•   And ultimately led to this:

Guess I owe Frank Reich money. Says he saw my tweet – or somebody told him about it – and he ran a version of the Philly Special on the first TD drive. Calls it the Patriots Special. Hope he takes Venmo.

•   Horseshoe Special? Yeah, I like the sound of that one…

Blitz pick up between LG and C big time pic.twitter.com/NVf8dUWRpY

•   No, I don’t have the energy to fight anyone on Bears captaincy rules. But if being a captain is a merit thing, who’s more worthy than Robert Quinn? He’ll get the “C” on his chest for MNF:

•   It just befuddles me to see folks up-in-arms over this. All this does is remind me of how winning cures all, because no one was caring about rotating captains in 2018. Play a good brand of football, no one says a word. Don’t? Then everything a team does will be critiqued as if it was the singular reason things aren’t going well.

•   Remember when the Bears were after Bashaud Breeland last offseason? Well, the Vikings – who signed Breeland to a one-year deal in free agency – put the starting corner on waivers after an incident at practice:

The #Vikings waived starting CB Bashaud Breeland after he got into a verbal altercation today at practice with coaches, took off his cleats and got into it with multiple teammates who were trying to calm the situation, sources tell me and @RapSheet. Too much to come back from.

"I feel like the situation has been blown out of proportion."

Former Vikings cornerback Bashaud Breeland goes on the record with @JosinaAnderson about the incidents leading up to his release from Minnesota:https://t.co/kkR7diZJUo

•   Considering the Bears’ need for healthy bodies at cornerback, I’d genuinely think about bringing Breeland into the mix. What’s the worst thing that could happen? Breeland getting into altercations with coaches on the hot seat? Well, actually, because I’m old enough to remember the Jay Ratliff situation in Chicago, maybe bringing in a hot-head into this environment isn’t the best idea. Moreover, I’d like to see some younger players get shots. Throw Kindle Vildor in the slot. Let rookie Thomas Graham Jr. elevate from the practice squad and get some trial-by-fire action. Is Dee Virgin a real cornerback or a computer-generated name spit out by an algorithm to generate clicks on transaction posts? These are real questions I’d like answers to on Monday.

•   Clippers, smart locks, toys, shoes, gift cards, and so much more are your Deals of the Day at Amazon. #ad

Exclusive: Former #Jaguars coach Urban Meyer speaks for the first time since getting fired, describing his dismissal to me as “devastating” and “heart-breaking.”

More from our 20+ minute conversation: https://t.co/DNrxliZCip

•   Urban Meyer said he was sorry, apologizing for his failures and actions in Jacksonville. Sorry is one word I’d use to describe Meyer. Although, my usage of the word and his would be quite different. Frankly, Meyer has done enough to ruffle feathers throughout the football ranks to where he shouldn’t get the benefit of the doubt when it comes to an image rehabilitation tour. If Meyer truly is sorry and wants to make amends, he needs a grassroots campaign. And it needs to be sincere. Otherwise, he is just another power-hungry coach who is apologetic only when he gets caught up and things go south.

So the Urban Meyer image rehab tour has already started. What we saw in Jacksonville is who he’s always been, he was just called out for it for the first time. This is him going after Jeremy Fowler for accurately quoting one of his player at Florida.https://t.co/vAXJUv5dcR

•   On the changing landscape of college football:

Jackson State once had three future Hall of Famers on the same team. The integration of college football sent the flow of elite recruits away from proud HBCUs. Then Travis Hunter and Deion Sanders came along. “This is history. This is just unbelievable.” https://t.co/dtfIcgf8Nt

•   What are we gonna do without college football on Saturdays this winter?

UTEP WITH THE CALL OF THE YEAR! #Utep #UAB pic.twitter.com/iKnduXEfmA

•   A walking bucket returns to the Bulls’ lineup today:

DeRozan, White, and Green Will All be Available for Sunday Night’s Matchup With Lakershttps://t.co/RNbblTso2B