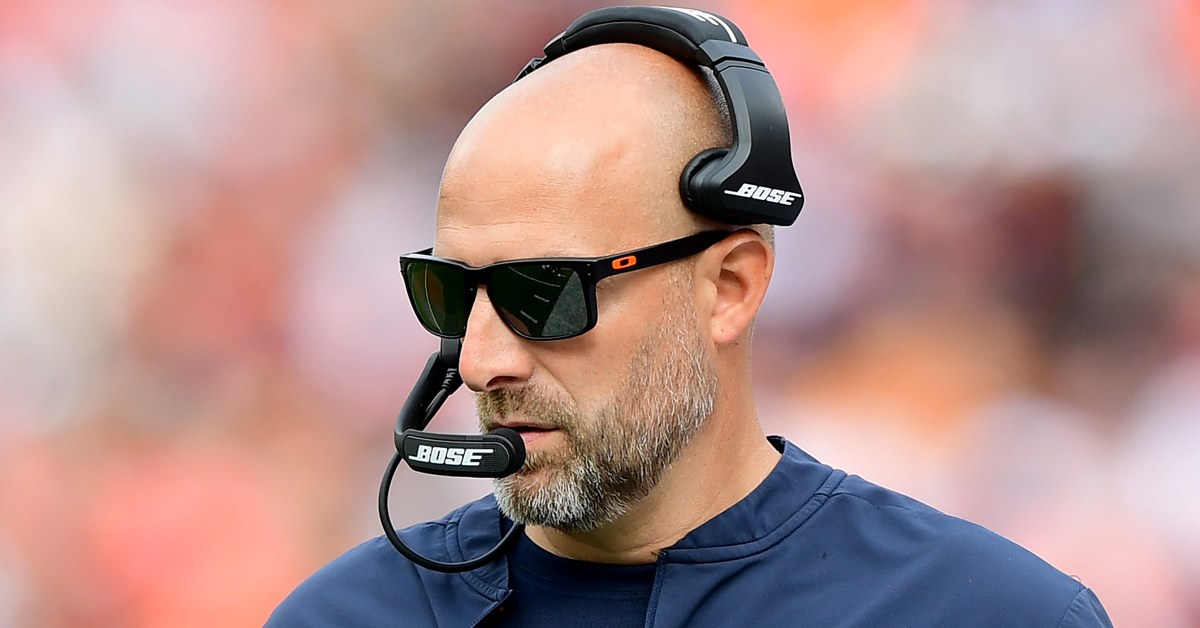 Am I the only person who wonders what Ernie Banks would think about a Monday Night Football doubleheader?

•   On a weekend that should’ve opened the eyes of anyone whose favorite team is in the market for a new head coach, there was no shortage of impressive coaching efforts. Dennis Allen probably put forth the most impressive showing of the weekend. The Saints defensive coordinator was filling in for Sean Payton, who sat out after catching COVID-19 again. Allen put together a defensive game plan to stifle Tom Brady to the tune of 26/48, 214 yards, 4.5 Y/A, 0 TD, 1 INT, 1 lost fumble, and a 57.1 passer rating. So long as Aaron Rodgers remains a roadblock in the NFC North, I’m willing to consider a defensive-leaning head coach if he can put together a solid offensive staff.

•   Allen legitimately had Brady throwing a fit on the sidelines like a toddler:

Gonna go out on a limb and say that tablet is broken. Tom Brady not happy tonight. pic.twitter.com/lJyXWjuBWY

•   I’m curious: Who says no to a hypothetical coaching staff featuring Dennis Allen as head coach and Joe Brady as offensive play-caller? Sure, the Panthers fired Brady a few weeks ago. But he has experience coaching with Allen while with the Saints (2017-18) and could still unlock some things at his next stop. And after seeing that Panthers unit on Sunday, it’s evident Brady wasn’t the sole problem in Carolina.

•   Maybe Greg Roman is more of your cup of tea? The Ravens offensive coordinator made Tyler Huntley look pretty darn good against a Packers defense that had been thrashing opponents. When Huntley wasn’t throwing dots to Mark Andrews…

Tyler Huntley is dealing when he targets Mark Andrews! TD no. 2 pic.twitter.com/5o2EBvsIPL

•    … he was galloping through the Packers defense:

TYLER HUNTLEY HAS SO MUCH FIGHT 🔥 pic.twitter.com/90P67OJ6B8

Tyler Huntley runs it in! 🔥 pic.twitter.com/q4o47WMLDi

•    It sure would’ve been nice to see Justin Fields be given the thumbs up to run freely last week. Then again, part of me wants to be cautious with the runs because protecting Fields’ ribs is important.

•    Sigh. Baltimore didn’t win. In fact, its loss to Green Bay helped the Packers maintain top-dog status in the NFC. But the Ravens put up 30 points. Huntley accounted for 288 yards of offense and four total touchdowns (without a turnover). Mark Andrews went for 10-136-2, reminding us that tight ends can be playmakers, too. Roman’s offenses often make the most out of whatever is available. Making lemonade from lemons is one thing. What Roman does is make premium lemonade that would get price mark-ups in yuppified neighborhoods despite the batch being brewed from deformed lemons that were in a discount bin. It’s impressive, no doubt.

•   There’s something about the Ravens. It’s almost as if coaching matters:

Can't say enough about how the #Ravens are in every week, it seems, regardless of who's playing and who is not.

•   Perhaps your mind hasn’t lost sight of what Matt Eberflus did to the Patriots on Saturday night. Indy’s defensive coordinator put the clamps on Pats QB Mac Jones. Eberflus’ defense had the rookie quarterback flummoxed for most of that game. Jones’ two interceptions in that game were as many as he had thrown in his previous 173 attempts over seven games. It also marked Jones’ first multi-INT game since Week 3 against the Saints. Jones’ 74.2 passer rating was his worst showing since putting up a 70.8 in Week 8 against the Chargers. In the five games that passed since that one, Jones put together aa 116.2 rating. That was just so much defense by the Colts. And if you can out-scheme Bill Belichick, then you’re worth checking out in my book.

•   Eberflus has worked alongside some notable defensive coaches over the years. He was with Rod Marinelli in Dallas, as well as Rob Ryan and Eric Mangini in Cleveland. As a college player, Eberflus was a three-year stater at Toledo. One of his seasons, Eberflus played for Nick Saban. That, too, is interesting. If I were hypothetically interviewing Eberflus for a potential Bears gig, I’d ask about what kind of offensive coaches he’d bring into the fold and hope he didn’t mention Jason Garrett (who was the head coach while Eberflus was in Dallas). If he can pass that test, then we could move on to another round of interviews. After Brandon Staley went from Rams DC to home-run head-coach hire by the Chargers, maybe we should be re-thinking which assistants get calls.

•   Speaking of assistants, Jason La Canfora (CBS Sports) reports coaches on Matt Nagy’s staff are already getting a head start on opportunities elsewhere. In a report in which La Canfora hints that new rules could nudge the Bears toward making Nagy their first-ever in-season firing, and that ownership is considering changing the organizational structure, the CBS reporter chimes in to share how several Bears assistants have eyes on college jobs and “most of the are operating as if they will be seeking employment elsewhere” for the 2022 season.

•   If you’ll recall, La Canfora’s reporting on the Bears’ situation last week regarding Trace Armstrong was quickly rebuffed by Armstrong himself. With that being said, part of me knows better than to take this news with anything more than a grain of salt. However, we’ve already seen one Bears assistant skip town for the college ranks. In other words, we can take this for what it is at face value — another data point suggesting change is coming.

•   The Cardinals not tweeting about their loss to the Lions is more embarrassing than losing to the Lions.

•   This game was pushed back days, only to have just one player activated from the COVID reserve list:

Only player the Browns officially activated from reserve/COVID-19 today was S John Johnson I.

They did not activate either QB Baker Mayfield nor Case Keenum from the list, leaving QB Nick Mullens in line to start today vs. the Las Vegas Raiders. pic.twitter.com/IV1fQdyPeJ

Who ya got tonight? 👀#RaiderNation | #Browns

NFC North rivals do battle on MNF. 🔥 (by @MercedesBenz)#Skol | #DaBears

•   Whose rings do we have to kiss to make this happen?

Honestly I kind of want something in the NFL similar to college system where we have awards for every position group.

Like instead of the Biletnikoff award we have the Rice Trophy. The NFL version of the Outland could be named after John Hannah, etc. https://t.co/9m06sNgfom

•   Some more background on one of the wildest football stories of the year:

Ohio knew Bishop Sycamore was a fake high school, did little to stop it: https://t.co/WyKH5N8OYe

•   Didn’t you miss watching the Bulls?

•   This isn’t bad for a guy once dubbed the offseason’s worst signing:

DeRozan had 19 of his 38 points in the 4th quarter to close things out against LeBron James.

Each time I think this man can't look more clutch, he proves me wrong. What a season.

•   I don’t think the NHL is wrong for this, but it is super whack when Rangers defenseman Jacob Trouba leveled an equally serious hit on Blackhawks player Jujhar Khaira and didn’t receive punishment from the league.