Nagy Finds the "Why's" on MNF, Kmet Kinda Quiet, Desai's "D" Shows Up, No Pro Bowl for Roquan? And Other Bears Bullets Skip to content 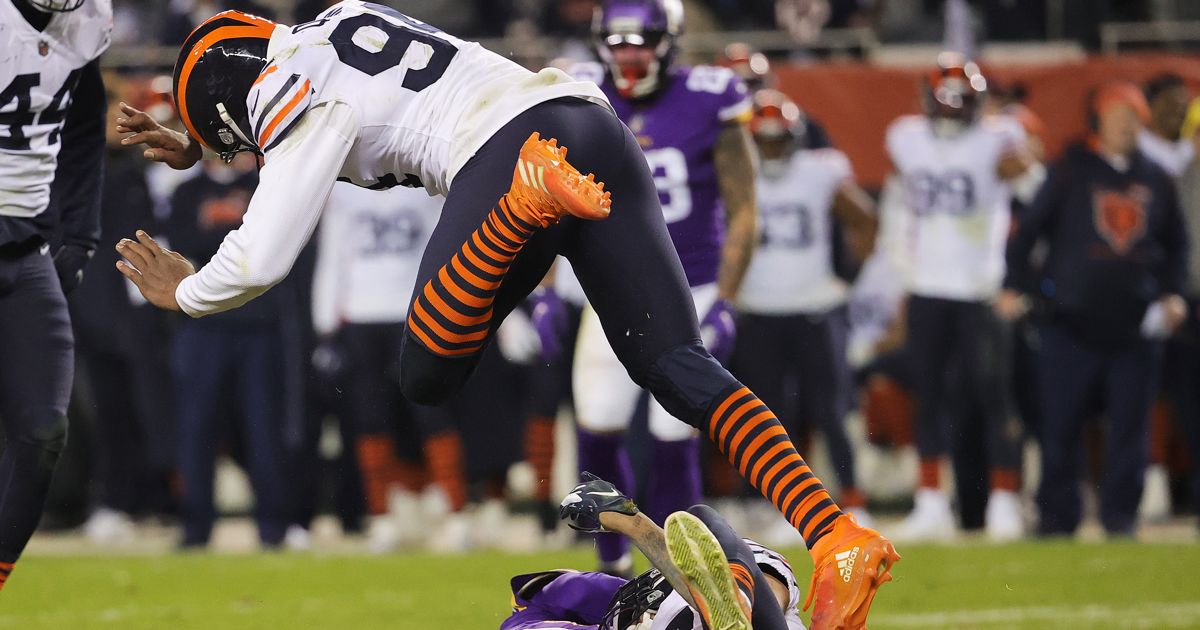 Just because Dec. 21 is the shortest day of the year doesn’t mean you can’t make the most of it. No excuses.

•   Last night was a show of futility unlike you’ve ever seen before:

No other NFL team since the merger has done all of those things in the same game.

•   Four years and 62 games (64, if you count the playoffs) into your head coaching career and this is where the Chicago Bears are right now. Matt Nagy’s offense is doing that? Still? They should be way beyond that, even if COVID has sunk its claws at this stage of the season. The penalty thing is a problem, and a nuanced one at that. Because, yeah, the Bears have a discipline issue. And we’ve discussed it. But holy cow, the officiating the Bears have seen in prime-time has me wholly convinced the league is better off letting players call their own games. Just think of the revenue the NFL would create by simply not paying officials. And because the league’s top concern is (has … and always been) squeezing every last dollar out of everything, I know better than to put it past them.

•   More on awful officiating later, because Roger Goodell might show up with hired goons at my doorstep if I keep going here.

•   This quote from Bears Head Coach Matt Nagy says it all:

Matt Nagy on the struggles offensively for the Bears: “It starts with me and it ends with me.”

•   There it is. Nagy finally found the “why’s” he has been looking for all this time. Yeah, I know. We’ve heard Nagy go to the “it starts with me and it ends with me” schtick before. Far too often. But it certainly sounded different when Nagy told reporters that last night. It reminded me of when Count Dooku in Revenge of the Sith realizes he is the reason why he’ll die at the hands of Anakin Skywalker. That quote had the same feeling of an “I brought this upon myself” moment. It’s water under the bridge at this point. Let’s just hope that Nagy can do what’s best for Justin Fields over the season’s final three games. That is the only thing that matters now.

•   Offensively, things *SHOULD* have been better by now. They weren’t last night. And I doubt they’ll get much better in the final three weeks. Unfortunately, that’s a common theme for the Bears since the start of 2019. But this one goes as an all-timer for this group. The Bears ran 9 more offensive plays, gained 177 more total yards, and made four more red zone trips than their opponents — and would’ve lost by 10+ points if not for a touchdown on the game’s final play. If you want to point fingers, you have no shortage of places to point. The lethal combination of poor play-calling, undisciplined play, laughable unforced errors, youthful inexperience, and physical and mental miscues were among the things that did the Bears in on Monday. Minnesota spent 60 minutes begging for Chicago’s football team to win that game. Instead, the Bears said: “Thanks, but no thanks.”

•   NOT-SO-FUN-FACT: There was a point in the fourth quarter where the Bears would’ve been holding a one-point lead had they (1) not had a field goal blocked, (2) made successful field goals on each of the three times they turned it over on downs, and (3) made a field goal rather than had a red-zone fumble. This bullet point alone should be a fireable offense.

•   This is the worst offensive sequence I’ve ever seen in my life watching the Bears, and it truly captures the spirit of the thing:

•   This game was the embodiment of Bears football. Failure to sustain drives on offense. An inability to stop ’em on defense. Blown coverages. Aggravating penalties. And clips that make you question why you’re a fan in the first place.

•   Justin Fields was fine. A line featuring 26/39, 285 passing yards, 0 interceptions, and a 96.6 passer rating is respectable for him at this stage of his rookie season. But the ball security issues have to be resolved sooner or later. Then again, part of me is glad he is having these issues now because it gives him time to see it on tape so he can correct it in an in-game situation rather than try to do so by simulating it in the offseason. That on-field experience is far more important than trying to learn through osmosis.

•   On the other side of the ball, we need to take a moment to give props to Sean Desai. Because, in a game where it would’ve been easy to fold like a cheap picnic table, Desai’s defense brought it against the Vikings. In addition to limiting Cousins to 3.6 yards/attempt, Chicago kept Minny’s QB to a 50% completion rate, 69.3 rating, and 87 yards. Cousins also took four sacks and six QB hits. Frankly, last night’s game told us more about the Vikings than it did the Bears. At this point, I’m almost OK justifying rooting for Minnesota to make the postseason, be a sacrificial lamb to the Rams or Bucs, and ultimately do well enough to nudge management/ownership to sign off on continuing spinning its wheels for eternity.

•   Look. It wasn’t all bad last night. Robert Quinn made the Pro Bowl and celebrated by adding Kirk Cousins to his sack list. The guy has been on one since the bye:

Robert Quinn in 5️⃣ games since the bye:

•   I wish everyone took to heart rivalry games like Akiem Hicks does. In his return, Hicks put up the following line: 4 solo tackles, 2 sacks, 2 tackles-for-loss, and 4 quarterback hits. Good ol’ No. 96 was playing like he was shot out of a cannon every snap he was on the field. That was refreshing.

•   Vikings linebacker Eric Kendricks was ejected for a hit on Justin Fields that reminded me it’s not a Bears-Vikes game unless a Minnesota defender tries to decapitate a Chicago QB.

•   One of two things Bears and Packers fans can agree on:

•   The other thing is that everything is better when it is accompanied by encased meats and New Glarus products.

•   This might be an oversimplification of things, but is the Eagles choice of Jalen Reagor instead of Justin Jefferson the sole reason the Vikings are where they are right now? A pox on Philly’s home for that one.

•   Admittedly, I have my biases. But the Halftime Thread of the Year award goes to:

Let’s try something new. It’s halftime. #DaBears trail 10-3. Instead of a .gif of how you’re feeling, drop your favorite pizza recommendation. Toppings, sides, and everything else.

I’m trying to find something out… pic.twitter.com/VgNfpNltTd

•   Another ho-hum night of racking up tackles for Roquan Smith. That’s nine 10+ tackle games for Smith, who was a Pro Bowl snub for a second straight year. Maybe he’ll get in as an alternate, but he was deserving to make it on the initial.

•   Is Mike Tannenbaum just saying things to check some SEO boxes and get the algorithm working overtime?

•   Kids tablets, ear buds, mattress protectors, books, and more are your Deals of the Day at Amazon. #ad

•   Another night, another win for the very-much-back Chicago Bulls. And another magical moment from DeMar DeRozan:

Codi Heuer and the Importance of Spin Efficiency – https://t.co/XaX1ckP69t pic.twitter.com/d5B9CXYVxn

•   … however, reading about the NHL suspending action was not as fun:

The NHL is Reportedly Suspending the Season Through Christmashttps://t.co/Ded6UfBv7q