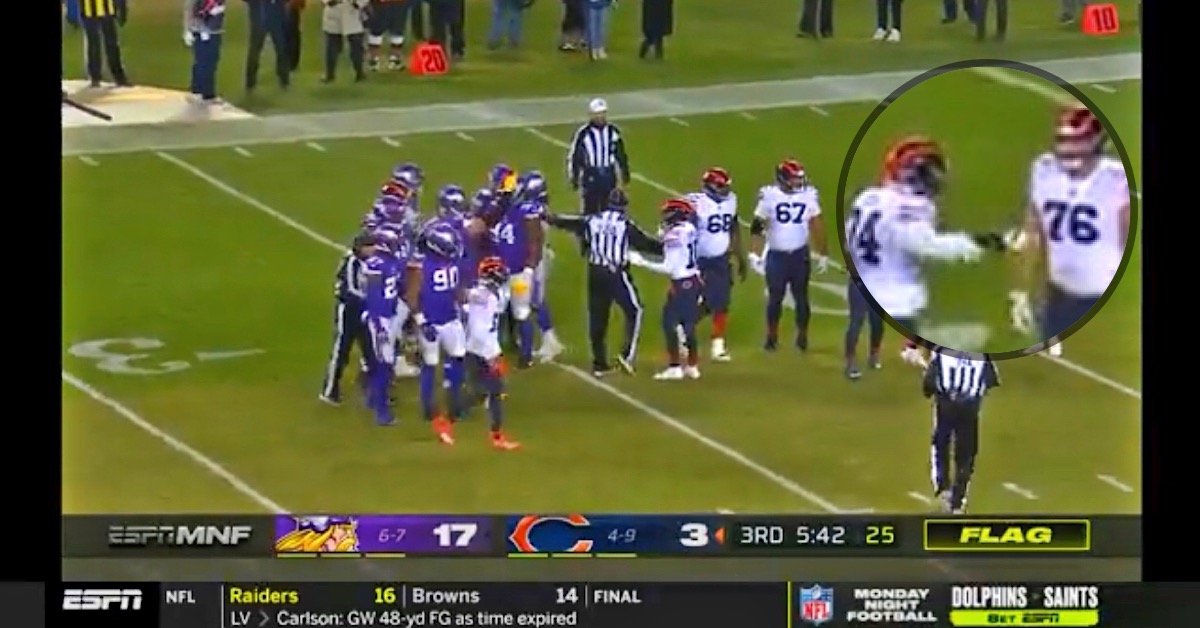 Bears fans take it hard when someone hits Justin Fields.

But Teven Jenkins seems to take it personally.

Hence, we saw the Chicago Bears left tackle take a 15-yard unsportsmanlike conduct penalty for coming to his quarterback’s defense on Monday night. It was something both Fields and Bears fans loved seeing in the moment. And in the grand scheme of things, Jenkins coming to the defense of his quarterback while showing some fire and passion in the process was ultimately viewed as a positive to come out of Monday’s loss to the Vikings.

Of course, not everyone sees things the same way.

Right tackle Germain Ifedi looked to be upset when Jenkins took the penalty, as you’ll see at the end of this clip:

Teven Jenkins didn't like the Vikings shoving Fields out of bounds, he gets flagged for unnecessary roughness, Bears guard #74 Germain Ifedi wasn't happy with Jenkins and shoved him. pic.twitter.com/z5qjXfnU9d

On Thursday, Ifedi explained his actions:

Germain Ifedi said he was trying to show 'tough love' with Teven Jenkins after his penalty Monday night: "I love the aggression. I love the passion he plays with. And I love the kid. … (But) you can't cost the team. There's no good situation to cost the team in any scenario."

Germain Ifedi on his message to Teven Jenkins after the personal foul: "It hurts you and it hurts the team. We just can’t have that in any situation because 15 yards, you can’t get that back. … He’s a good kid. We’re a close-knit group so we can hold each other accountable."

On the one hand, I get it. And Ifedi isn’t necessarily wrong for feeling this way. Additionally, it is important that Ifedi was sharing this message publicly. Moreover, the most important thing to come from Ifedi speaking up is that the offensive line has built camaraderie over the year. So much so, the players can truly hold each other accountable. Offensive lines often have to be greater than the sum of its parts. And if these guys are working together in unison, then it’s good that Jenkins and Ifedi can have that interaction on the field and turn it into a teaching point.

But at the end of the day, it remains true that it was important for Jenkins to assert himself in that moment. It was important for Jenkins to back his QB. And it was even important for him to act in a manner in which he took a penalty. We’re at the point of the season where player development matters more than anything. The more teachable moments, the better. If Jenkins has to take a penalty in the process, then so be it. This can easily be framed as a moment in which Jenkins learns how far he can go before getting rung up on a penalty next time he feels the need to stick up for his quarterback. That he is taking constructive criticism from a veteran teammate is an added bonus in this situation.

In the end, what matters most is that both Ifedi and Jenkins were in the right on some level. Jenkins for protecting his teammate, and Ifedi for having the perspective of driving home to a teammate that there are consequences to actions. All is well that ends well. Moving forward, the Bears will be better off with Jenkins being willing to go to war for his QB, while also doing it without drawing a penalty in the future. Much like working the refs, there’s an artwork to it. Hopefully, Ifedi continues to teach him those finer points over the final three weeks.