Did Pete Carroll Save the Bears From Themselves? And Other Bears Bullets Skip to content 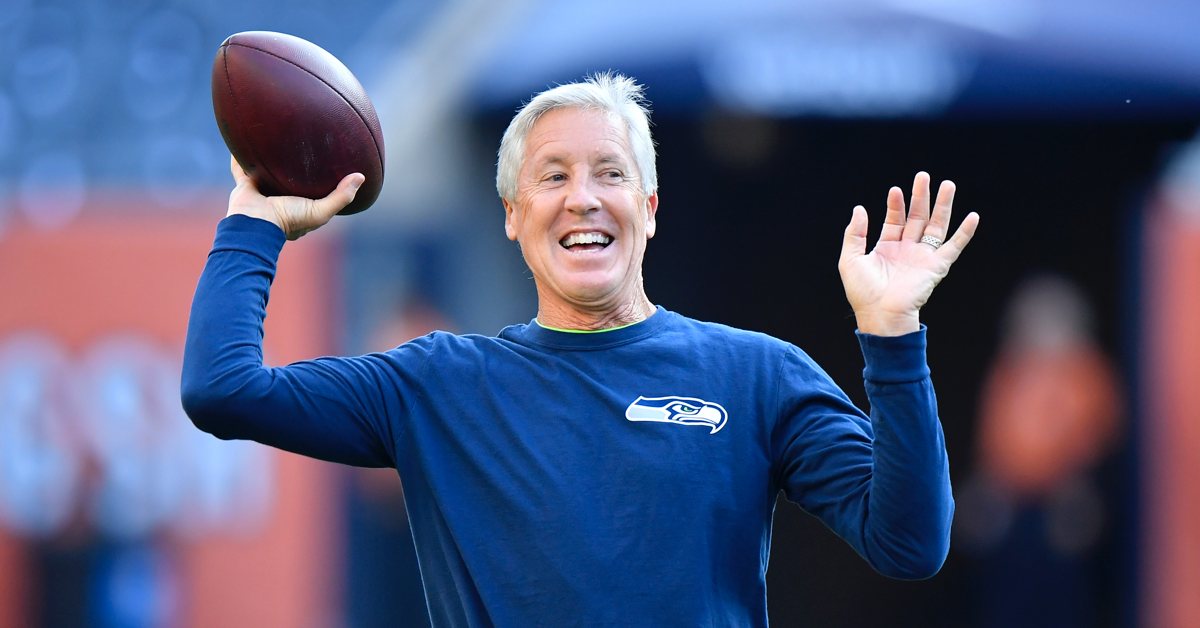 If you were wondering how my holiday weekend was going, my friends have a collage worth of images of me taking naps the last few days. Speaking of which, I could use another.

•   There is a common belief that poor special teams play will doom the Packers in the postseason. And conceivably, it might. But officiating like this could offset not-so-special teams:

Baker Mayfield throws a game sealing INT on this play where this defensive holding is blatantly ignored and nothing is called #CLEvsGB pic.twitter.com/2drNzALwsL

I have no words pic.twitter.com/ieOr10fOod

NFL refs should have to do post-game media just like the players. When you mess up that badly, you should be accountable to answer questions about it.

•   Baker Mayfield (4 INT, 55.3 passer rating) didn’t do himself any favors. And it’s hard to gain the benefit of the doubt when you’re that bad on game day. But that shouldn’t matter on a play that clear and obvious.

•   Meanwhile, this is punishable by catapult if done by a Steelers opponent, on Monday Night Football, and in Pittsburgh:

•   For the record, I’m all for cheers, taunts, and celebrations. But I’m still miffed by the NFL’s calls in Week 9 and the league’s backing of its officials, which was followed by a very quiet “oops” before the next Sunday’s games. It is infuriating that a judgment call that is called with no real consistency around the league because different eyes see things differently helped swing a prime-time game. What a league!

•   And because the Packers are the gift that keeps giving, coughing up 26.5 fantasy points to Nick Chubb when Brett is rolling with him during fantasy week is a real kick in the knickers. Thanks for nothing, Cheesedoodles. I hope your beer freezes.

•   Only three more Bears games to preview this year. And while finding worthwhile storylines might be a challenge in future weeks, this one is a trip. Remember all that chatter about a Russell Wilson-Bears trade? Jeff Hughes of Da Bears Blog takes us through the trade that never went down. This whole past offseason was a rollercoaster. There were trade pitches reportedly including Roquan Smith and Khalil Mack. Trading for Russell was supposedly a priority for the franchise. And while the team made a substantial offer, a miss was still a miss. Ultimately, the Bear should probably be happy Pete Carroll was able to intervene and keep Wilson in Seattle.

•   You think the Seahawks don’t have regrets? Admittedly, these feelings would have come in hindsight. Nevertheless, a rebuilding Seahawks team would sure love multiple first-round picks and young contributors on rookie deals as they try to climb up the NFC West ranks again. So, uh, thanks (?) Pete.

•   Don’t get me wrong. Russell Wilson is a better QB than Justin Fields right now. And there is a non-zero chance that Wilson – even at this stage of his career – is better than Fields might ever be. But Chicago’s football team would be in a far worse place than it is now had it given up three year’s worth of first-round picks and players for Wilson. A successful Wilson deal might’ve given the Bears a better QB for the short-term, but the long-term build-up ahead would be a steeper climb had a deal gone down. Chicago might’ve dodged a bullet. Although, they’re not out of the woods just yet.

•   Moving forward, Bleacher Report’s Chris Roling offers up ideas on how each NFL team can help its QB in 2022. There are no wrong answers you can come through with if you’re the Bears. More offensive line help? That would be nice. A boost among the pass-catchers? Surely, that would be nice. But Roling lands on a change at head coach being THE THING to get the ball rolling. Roling doesn’t share any names as possible fits, but does it matter? Any change might be enough of a help to get Fields going in the right direction.

Ryan Willis, Who could be Nick Foles’ back up on Sunday in Seattle if Justin Fields is not ready, was walking on Soldier Field last week before the game, and told me: “I know I can do this.”

And he may just get his shot.

•   No matter who is starting at QB, Darnell Mooney is gonna get some targets:

•   Mooney’s five games since the bye: 21 catches, 353 yards, 1 TD. That comes to a per game average of about 4 catches and 71 receiving yards. Over the course of a 16-game season, that five-game pace looks like 67 catches, 1,130 receiving yards, and 3 touchdowns. You’d love to see Mooney find pay dirt more often. But the second-year player from Tulane has grown his game enough to allow for you to settle on him being a starting receiver in a good offense.

•   But in case you were curious, it’s Nick Foles under center for the Bears today. Foles, who’s had some things to say about his time playing for Matt Nagy, starts in place of Justin Fields (ankle injury) and Andy Dalton (hand/groin).

•   We’ll be spending a chunk of time in the days (weeks?) ahead thinking about the Bears’ future. But let’s remember that it’s not how you start, but how you finish:

Colts are one of the hottest teams in the NFL. pic.twitter.com/w0ia1IsTdX

•   Also … let’s remember that Frank Reich was no one’s first choice. In fact, had Josh McDaniels not gotten cold feet during the winter of 2018, who knows where the Colts would be. Worse? Better? I must say that a front office that is on the verge of making the playoffs for the third time in four years with three different quarterbacks is impressive as heck. That truly speaks volumes for what GM Chris Ballard and the rest of that organization are doing.

•   Is it awkward that Ballard and Ryan Pace both interviewed for the GM opening on the same date in 2015?

•  Memories: This week’s Bears Rewind takes us to a better place in Bears-Seahawks history.

•   Niners GM John Lynch accidentally liked a tweet besmirching Jimmy Garoppolo, and the internet was quick to move on it:

John Lynch WHAT ARE YOU DOING😂😂😂 pic.twitter.com/D2EGjRQG03

Next time John Lynch passes by Jimmy G in the hallway and tries to explain what happened with that tweet https://t.co/0u8yeXdAzG pic.twitter.com/GiwCIoyhAr

Apparently – while in Christmas Eve Mass w my Family – I accidentally and unknowingly Liked a Tweet. Never intended to and remain a huge believer in Jimmy. Merry Christmas to everyone.

•   Wait … who checks their phone at Christmas Eve Mass?

•   I think this is the first I’ve seen anyone give the Browns guff for their Baker Mayfield pick:

For all the grief the Bears get for taking Trubisky over Watson and Mahomes, the Browns deserve plenty for taking Mayfield over Josh Allen

Nobody is throwing cold water on the rumors this week tying the Cubs to Carlos Correa. So this is going to have some legs. https://t.co/k1iHJhoiuK