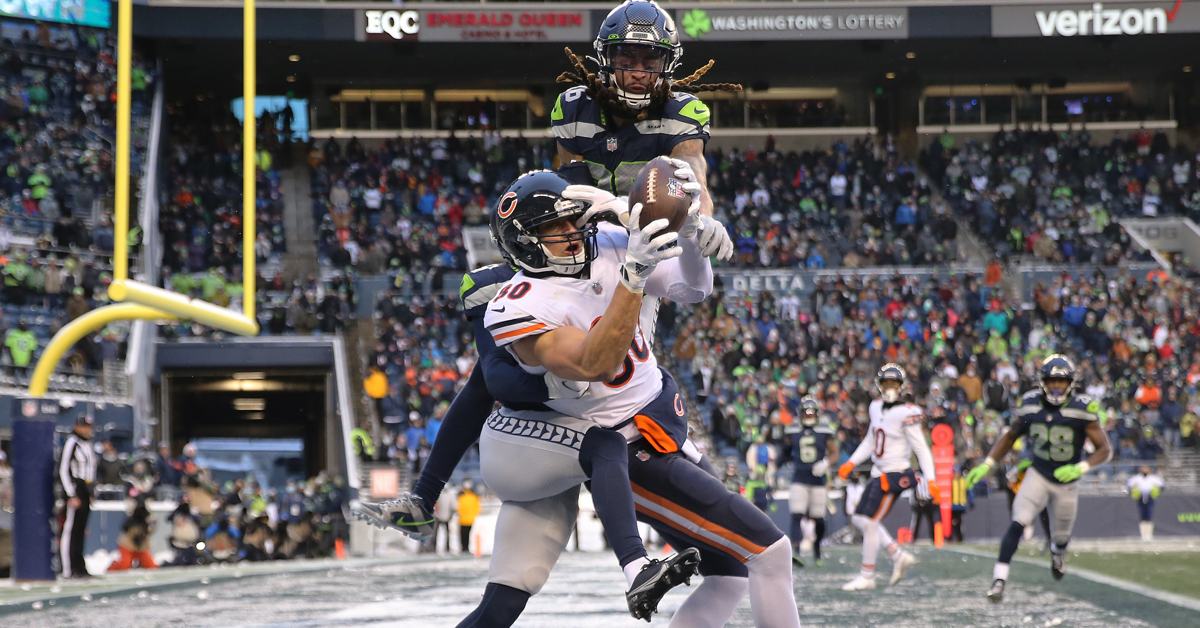 We were given the ever-so-rare occurrence in which the Bears and Bulls won their games on the same day. Consider it a better-late-than-never parlay gift to wrap up your holiday weekend.

•   That snowy Bears dub was as much for the die-hards who willingly put themselves through that slop of a game as it was for GM Ryan Pace, Head Coach Matt Nagy, and their respective staffs. Take a moment to think about what happened to put one in the win column. It begins with Robert Quinn jumping on board as a big-ticket free agent because he can contribute game-changing plays like this:

Robert Quinn picks up his 17th sack of the season. 💪 #CHIvsSEA | #DaBears pic.twitter.com/cK9jj6S2ql

•   Think about the timeline that opens up primarily because of Quinn’s freaky bend, superb athleticism, and a knack for making big plays. What began as a 3rd-and-4 play for the Seahawks from the Bears’ 8-yard-line ultimately ends in a Bears win. How? Quinn sacks Russell Wilson for a 13-yard loss. Jason Myers follows with a field goal miss from 39 yards out. Chicago (turnover on downs) and Seattle (punt) trade possessions, only for Nick Foles to drive 80 yards in six plays for two game-winning scores. The first was  jump-ball touchdown throw to Jimmy Graham to bring the game within one, then a broken play two-point conversion from Damiere Byrd for the win.

•   Even Akiem Hicks was loving the Hollywood ending:

Jimmy G . TD for the win. In Seattle. Couldn’t have wrote it better myself✌🏾 @TheJimmyGraham

•   Think about it for a moment. You trade for Nick Foles to put together a performance like that in a pinch. In place of an injured Justin Fields, Foles went 24-for-35, threw for 250 yards, 1 touchdown, no interceptions, and a 98.5 passer rating. A good backup QB can do just enough to scrape by. And if you’re fortunate, he can make a play to win a game if the moment presents itself. All things being equal, that performance by Foles makes you wonder why the Bears even had to spend $10 million to bring on Andy Dalton in the first place. Spending $17 million on placeholder quarterbacks isn’t the wisest usage of salary cap space.

•   And then there’s Graham. It was an unpopular signing, but one that paid off immediately in terms of scoring touchdowns (remember when Graham led the Bears in receiving scores last year) and locker room leadership. A year later, Graham’s return was equally as unpopular. Let’s face it. There were better ways to spend than on a TE2 who plays less than 30% of the offensive snaps. But if you’re going to sign a player like Graham, you do so with the intent to take advantage of his size and experience in order to score red zone touchdowns on jump-ball throws.

•   Was I the only one who got a kick from watching all of the former Seahawks team up to ultimately eliminate Pete Carroll from playoff contention? Graham gets the glory with the score. But let’s not lose sight of Bruce Irvin with a pressure on Russell Wilson with the game on the line. Or Germain Ifedi falling on a Foles fumble that otherwise would’ve been a gut-punching turnover. It takes a village to beat a down-on-their-luck Seahawks team, I guess.

•   I don’t understand what Ifedi is doing here:

•   Was Ifedi playing the role of Fun Police? Or does he just happen to be the guy who celebrates in a weird way? Either way, that’s two weeks of weird interactions with teammates after moments folks should be rallying around.

•   With Teven Jenkins playing just 3 offensive snaps before leaving with a shoulder injury, Larry Borom – who lost his starting job to Ifedi – took over at left tackle. Not only did he hold his own protecting Foles’ blindside, he delivered a key block on Khalil Herbert’s touchdown run:

•   Sunday was a day for bounce backs. Not only did Borom perform well off the bench, so did Thomas Graham Jr. in his second career game. Much to the chagrin of those watching and hoping the Bears would let the kids play, Graham did not start and was instead relegated to come off the bench in favor of Artie Burns. That neither Graham nor Borom – both rookies from Chicago’s much-ballyhooed 2021 NFL Draft class – were starting for a 4-10 team in Week 16 of a lost season is one of the things that could’ve been avoidable had the team cut the cord on the Nagy experience before Sunday. At the end of the day, both played important roles in a win. Go figure.

•   And to think, this is how Graham’s day started:

It started with a moon ball and ended with a moonwalk into the end zone. @DangeRussWilson to @dkm14 for the 41-yard touchdown. 🙌

If you're going to get burned, best to do it in the snow. ♨️ pic.twitter.com/To3hgOrewl

•   Graham was in on a total of 38 defensive snaps, or 68 percent of the defensive plays. That’s two more snaps than Burns, and the same amount of snaps as second-year cornerback Kindle Vildor. Third-year corner Duke Shelley led all Bears corners with 40 snaps. New eyes on these DBs should make a Graham-Vildor-Shelley camp competition worth watching next summer.

•   Hang these images at the Art Institute downtown:

A story in four photos.

Chicago Bears wide receiver Damiere Byrd scores a two-point conversion during the fourth quarter against the Seattle Seahawks at Lumen Field Sunday in Seattle. The Bears would defeat the Seahawks 25-24. pic.twitter.com/7idVQEXrm0

•   Gotta love Foles’ explanation of the play above: “The reason it worked was Byrd played backyard football and knew that they covered it well. If he wouldn’t have done his thing and just stopped and came back, we don’t win this game.” (670 The Score)

•   If only the offense was always as picturesque as the images above. As nice as that was, it won’t erase the Bears’ first red zone trip. My apologies if you were trying to get this four-play sequence that began with 1st-and-goal from the 4-yard-line while down 7-0: David Montgomery runs for a 2-yard gain. Wildcat run with Montgomery loses two yards despite linemen Alex Bars and Elijah Wilkinson reporting as eligible. Shotgun pass from Nick Foles incomplete. Another shotgun pass. This time to Montgomery out of the flat, short of the end zone, and for a gain of two yards.

•   There was no justification for any of what went down on that drive. None.

•   A Dazz Newsome splash play in the punt return game was eye-opening, but might get lost in the shuffle. Let’s not allow that to happen:

#Bears doubled the gunners on that punt and it paid off as Dazz Newsome had room and picked up 28 yards on the return.

•   Newsome’s punt return prowess is one of the reasons it was easy to feel good about that draft pick. Between Newsome’s punt return potential and Khalil Herbert’s excellent kick returns, that Chicago is getting something out of Day 3 picks is nice for depth purposes. If only those picks weren’t dealt away in willy-nilly fashion.

•   Also not to be lost in the mix was Cole Kmet, who caught Akiem Hicks’ eye:

The Chicago kid gettin that YAC. I see ya @ColeKmet

•   Four catches, 49 yards, and a 12.3 yards per catch average for Kmet. The Notre Dame product is carving out a niche for himself. How he is used moving forward will be a challenge for the next Bears coach.

•   At the end of the day, it was an oddly satisfying, and totally mystifying win by the Bears. No, a one-point win in a game pitting teams that came into Sunday’s action with a combined 9-19 record doesn’t change anything from a big picture perspective. The Bears aren’t automatically good now. But three hours of football in the snow with Chicago winning at the end was a nice payoff for fans who put themselves through it on Sunday. Never doubt the passion and commitment of Bears fans, who show up in droves in even their most lackluster seasons because it is actually good and fun to be a part of something bigger than you that you have no control over.