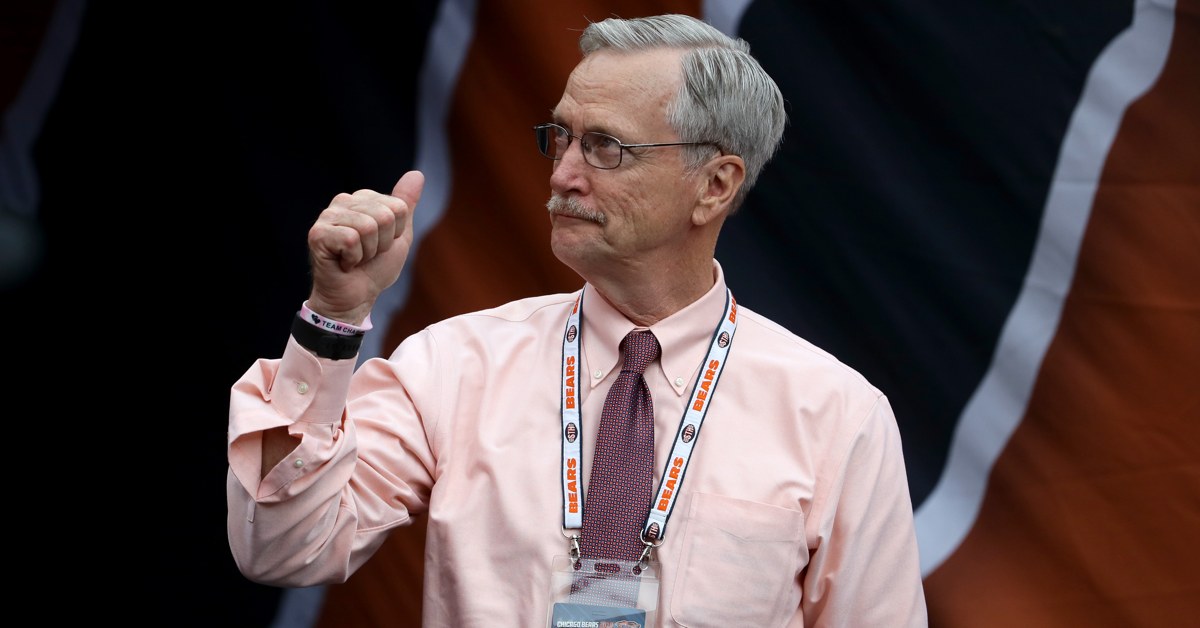 Would I prefer to be sizing up potential postseason matchups and charting a course to the Super Bowl? Uh, yeah. I would. But that’s not happening. So let’s focus instead on the potential organizational changes that could be coming in the near future — starting at The Athletic, where Adam Jahns peers into the future of the Chicago Bears’ organization.

The general vibe of Jahns’ work is that the wheels of change are in motion and not limited to just one level of the organization: “League sources have indicated that everything is being considered and some early groundwork is being done by McCaskey, whether it’s the looming search for a new coach, a new executive or both.”

And with that report, Jahns becomes the latest to say the Bears are looking at top-to-bottom organizational change without explicitly saying it. That everything is on the table is a good thing. But what does that even mean? Let’s discuss.

The First (And Most Important) Step

Jahns believes that football guy to help McCaskey find his football guy could be Bill Polian, a Hall of Fame executive with six NFL Executive of the Year awards under his belt. Polian could be a helpful hand in the advisory process. And although he was infamously unwilling to see Lamar Jackson as a pro QB and thought he should become a receiver, Polian did ultimately – and publicly – admit he was wrong. That’s an important step in the self-assessment process and something the Bears could learn up-and-down the organizational flow chart.

For what it’s worth, Jason La Canfora recently offered up Trace Armstrong as someone who could run the whole show. Armstrong would go on and rebuff those rumors almost instantly. However, if McCaskey went on a fact-finding mission by picking Armstrong’s brain as an unofficial advisor, that would be a step in the right direction. Essentially, what McCaskey HAS TO BE WILLING to add a buffer layer to this current chain of command.

As Chairman, McCaskey will make the final call to push things through at the end of the day. That’s what the chairman of any org does. HOWEVER, McCaskey needs to remove himself from the decision-making process. To do this, he’ll need to install a system in which “A Football Guy” answers to him. Preferably, after he reaches out to a different “Football Guy” to aid him in the process.

If McCaskey has any questions as to how this can work, he can look around town for help.

Cubs Chairman Tom Ricketts split presidential powers between Crane Kenney (business) and Theo Epstein (business) in October 2011. That change in power structure would eventually lead to division titles in 2016, 2017, and 2020, postseason appearances in 2015 and 2018, and the end of a lengthy World Series drought in 2016.

Elsewhere in the city, the Bulls are getting a high quality return on its re-investment into the organization. Just two seasons after dumping the GarPax era, the tag team of Artūras Karnišovas and Marc Eversley has the Bulls going places. Karnišovas (Executive Vice President of Basketball Operations) has Eversley (General Manager) under him. And ultimately, this is a chain of command that answers to Bulls President and Chief Operating Officer Michael Reinsdorf. Long story, short: This can work, but only if you allow yourself to hire the right people.

Once McCaskey discusses things with A Football Consultant and eventually settles on A Football Guy, then the most tangible changes can begin occurring.

New general manager? That feels like a given. What doesn’t feel as certain is what role a new GM plays. Does a new general manager play a more traditional role? Or does a new GM step in as the second-banana beneath an executive above them on the chain of command. In other words, is the GM more of a Carter Hawkins to Cubs top dog Jed Hoyer? Someone who is the second in command to a President of Baseball Operations who is the front-facing lead exec? Or is the GM more of a Rick Hahn to Kenny Williams? Hahn is the general manager and front-facing executive in the White Sox power structure, while Williams’ Executive Vice President title puts him at another level. In any case, either could work. And both could represent an improvement over the Bears’ current situation.

No matter how bleak things have gotten for the Bears, it’s important to remember that this is a destination job that should pique the interest of football’s best and brightest.

Positions of general manager, head coach, and even a possible president of football ops would be attractive to a great many candidates. Offensive-leaning coaches who could unlock some things in Justin Fields should be banging the door down. Defensive thinkers who can attract a QB guru to elevate the offense, while also building on what has been Chicago’s bread and butter over the years should be begging for an audience. CEO types who can build a strong staff and delegate should be preparing their pitches.

These jobs should have a lengthy list of worthwhile suitors.

Don’t roll your eyes at me. The Bears are still a charter franchise with a potentially very good quarterback at the outset of his career. Chicago is also a very big market and the Bears tend to both generate and spend plenty of money thanks to ratings that stay strong even when the team is not. And while we’re on it, imperfect as they have been, ownership has green-lit a handful of impact moves rather than stand in the way over the years.

In short, the Bears are a sleeping giant. One that – if it would stop tripping over its own two feet – could really make an impact on a new generation. Who wouldn’t want to be the person who changes everything? That’s how legends come to be, after all.

ESPN’s Louis Riddick said it best when he was asked if the Bears job would interest him: “Of course I would listen. It’s the Chicago Bears, man,” Riddick told The Waddle and Silvy Show. “It’s a blue blood franchise. And you know what … I’ll leave it at that.”

At the end of the day, the good news is that the Bears will be in a good place once they do what must be done. And you know what … I’ll leave it at that.