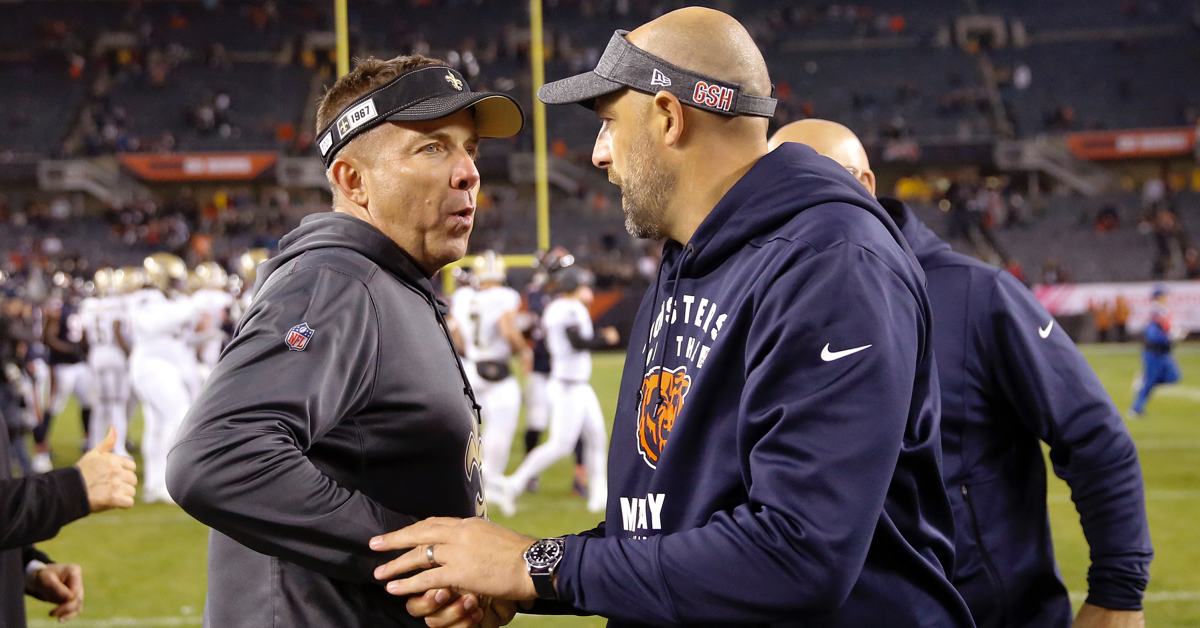 Whenever the Chicago Bears finally get around to starting their coaching search, they need to aim high.

They did it last year in their pursuit of a quarterback. And while they fell short in the Russell Wilson sweepstakes, the Bears ultimately found pay dirt in a trade-up with the Giants to take Justin Fields.

With Fields in place, there is no reason not to go big-game hunting this offseason in search of a head coach. And with that in mind, Bears fans are already dreaming of reeling in the biggest catch:

A message to Sean Payton via @nflnetwork. pic.twitter.com/uz2GNUXjWN

Would honestly love if the Bears could get Sean Payton

Sean Payton definitely coming to the Bears after this pathetic performance 💀

OK, I couldn’t help myself with the last one.

If white whale analogies don’t do it for you, then how about a Chicago Sports comp?

Sean Payton is to the Bears what Theo Epstein was to the Cubs in 2011. Payton is an established star in the coaching world. He is a legend in New Orleans and will always be one there no matter what happens moving forward. But as was the case with Epstein in 2011, Payton is locked into his current organization and obviously, totally, definitely not leaving. At least, not until he is spotted at a Starbucks in Lakeview, right?

All jokes aside, while my heart tells me to dive deeper, my head tells me I should know better than to even consider this possibility right now. And yet, the idea of trading for Sean Payton has been on our radar for the better part of at least a month. And it isn’t going to just slip away. Not after watching the Saints stumble in prime-time without a quarterback. And definitely not after watching Taysom Hill, Trevor Siemian, and Ian Book sling the thing in place of Jameis Winston.

Tack on not when not-so-casual suggestions by league reporters are dropping like this, and it’s gonna be impossible to not dream the biggest dream:

So, Albert Breer (@AlbertBreer) from Sports Illustrated was live streaming on Twitter. I asked him, “Next GM & HC for the #Bears?”

At the end of the day, the difference between a successful Cubs pursuit of Epstein and a theoretical pursuit of Payton might lie in ownership. Ultimately, the biggest difference might be that the Ricketts family came in, knew what they didn’t know, brought in Pat Gillick as a consultant to help figure things out, and the rest is history.

So … who wants to be football Pat Gillick?

Well, The Athletic’s Adam Jahns was recently peering into the future of the Chicago Bears’ organization. And in his report, Jahns writs: “League sources have indicated that everything is being considered and some early groundwork is being done by Chairman George McCaskey, whether it’s the looming search for a new coach, a new executive or both.”

On top of that, Jahns offers up Bill Polian, as “a realistic option” to be an adviser to McCaskey in this process. Polian is a Hall of Fame executive for his work with Bills, Panthers and Colts. Nothing like calling on someone who won six NFL Executive of the Year awards for their work searching for advice. It’s possible that guidance is already taking place. Whether it’s an injury, which coach is calling plays, or who’s helping in a potential organizational restructuring, few teams keep secrets like the Bears.

In the end, I come back to thinking the Payton stuff is too fun not to follow. So we’ll do it, but at a safe distance.