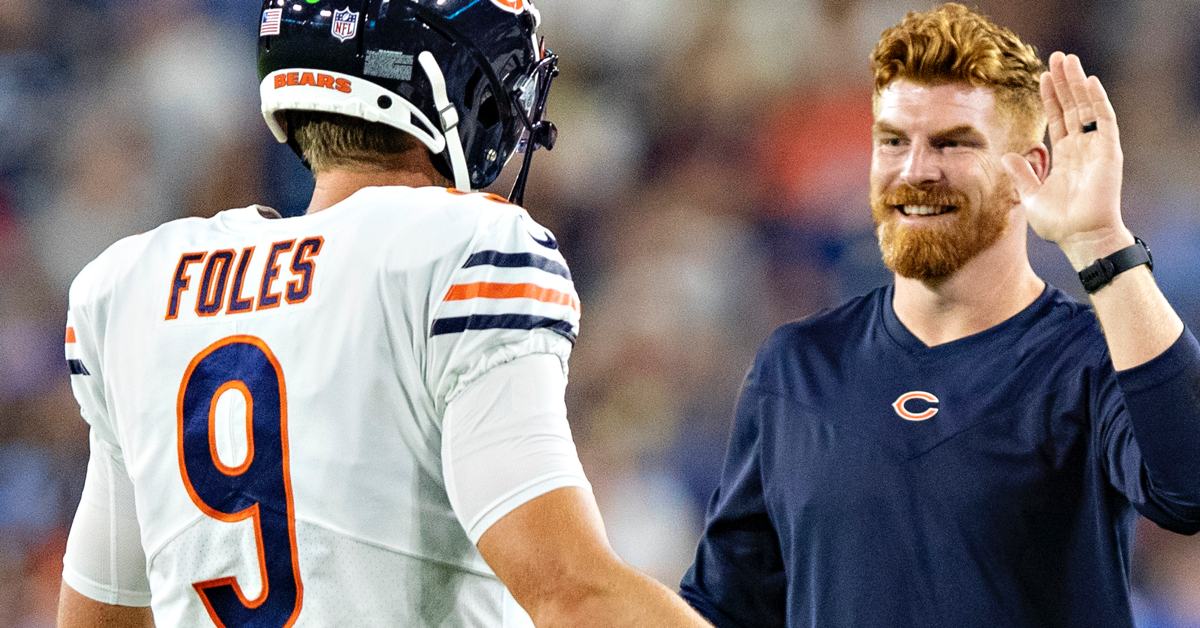 Before I dive into the first set of Bullets of 2022, I wanted to take some time to say thanks for being here. The last few years of Bears football have been kin to a taffy pull. And yet, we have stuck together as an online football community through it all. In my heart of hearts, I believe we’ll eventually be rewarded for persevering through these tough times. But first, we’ve got two games to get through.

Happy New Year to all of you reading this, and may it be a prosperous one.

•   In case you missed it while preparing for your New Year’s Eve celebrations, Friday was newsy in Bearsland. Andy Dalton will start in place of Justin Fields because the rookie’s ankle continues to be problematic. Fields was practicing with limitations throughout the week. And while that is an improvement from the prior week when he was reportedly in a walking boot, it’s not enough to start Fields at less than full strength. Nick Foles, who orchestrated a game-winning drive in last week’s game at Seattle, will serve as QB2.

•   Elsewhere on health watch, Akiem Hicks is coming off the COVID reserve list. This makes him available to play in Sunday’s game against the Giants. The last time we saw Hicks, he was hassling Kirk Cousins like it was nobody’s business. Two sacks and three QB hits while playing just 53 percent of the defense’s snaps is a nice look for a player coming off injury. There is a non-zero chance this will be Hicks’ last game at Soldier Field as a member of Chicago’s football team. If that’s the case, I hope he makes the most of it.

•   The Bears announced Alec Ogletree, Cole Kmet, and Christian Jones will be captains this week. I, for one, am at my wits end with weekly captains. Full disclosure: I don’t care one way or another. If a team votes on weekly captains, cool. Should they want set captains, then that’s fine too. Captaincy discourse has run its course with me. HOWEVER, I don’t understand how Akiem Hicks isn’t a captain this week. One of the longest-tenured Bears is playing in what might be his last game at Soldier Field and he’s not a captain? That’s whack. And that’s before we even discuss Hicks’ role as an actual leader.

•   But, hey, at least Ogletree gets a revenge game captaincy against the Giants.

•   On the other side of the coin, it’s neat that Kmet – Chicagoland area product – gets captains honors in a home finale.

•   Andy Dalton, the Bears’ starting QB this week, hasn’t been in Chicago long. But his donation to the fund for Jeff Dickerson’s son is a nice touch for a first-year player:

Andy Dalton is a good dude.

Earlier this week he donated to Parker’s fund for Jeff Dickerson’s son. pic.twitter.com/wEwy7D1c7k

•   Remember in 2017 when Bills fans went bonkers in donating to the Andy and Jordan Dalton Foundation after Andy Dalton’s Bengals beat the Ravens and sent Buffalo to the playoffs for the first time in 17 years? Bills Mafia raised $442,000, but the Buffalo News reports almost $100,000 of that went to the company responsible for managing the nonprofit. And according to experts cited by reporters, that’s a larger-than-usual take. Upon learning things from the Buffalo News, the Daltons broke ties with that company, thus ensuring 100 percent of proceeds go to those in need by cutting out the middle man. It’s good to see folks do the right thing at the end.

•   Good to see the Bears being busy during bowl season:

•   Was Champ Kelly scouting talent on the field or on the sidelines? 😏

•   Don’t get me wrong. I love watching the best and brightest on the biggest stage. So there is part of me looking forward to watching a loaded Alabama team face a stacked Georgia bunch. But part of me feels was if the path to the College Football Playoff final is getting stale. Hopefully, the championship game is fun and competitive.

•   With that in mind, Jacob Infante (Windy City Gridiron) has some college prospects playing in today’s New Year’s Six batch of bowl games who the Bears should be targeting in the upcoming NFL Draft.

•   Sometimes, I like to conveniently forget Devin Hester played for other teams. But I’ll never forget watching this game and Hester getting to have his moment:

•   A reminder that, when we talk extensions for players, they don’t necessarily have to be big-money expenditures that eat a ton of cap space:

Patriots and safety Adrian Phillips have agreed to terms on a 3-year extension worth $12.75 million and a max value of $14.25 million, including $7.25 million guaranteed, per source, as @caplannfl also reported.

•   Phillips, who turns 30 in March, haas been a solid safety for both the San Diego and Los Angeles Chargers, as well as with the Patriots. The eight-year pro getting a modest three-year deal could conceivably allow us to dream on the Bears doing something similar with Akiem Hicks? Sure, they’re different players, at different stages of their careers, at different positions, with teams on different levels on the competitive scale. But at its core, it’s a short-term extension for a vet player who is good at their job. At minimum, it’s something to keep in mind for the future.

•   Another high-profile NFL lifer passed away:

Former NFL player and head coach Dan Reeves, who during his 38 years in the league participated in nine Super Bowls, the third most for an individual, has passed away. Reeves was 77. pic.twitter.com/njjJ3Gqo7z

"You've got to have good people with strong character."

A look back through Dan Reeves' time as Broncos head coach: pic.twitter.com/JuG9uJ20fs

•   Dan Reeves made nine Super Bowls during his time as a head coach, which is remarkable. Many will remember his John Elway Broncos teams. But the “Dirty Bird” Falcons Super Bowl participant was one of those fun football stories I enjoyed following when I was growing into football fandom.

•   In between naps and the occasional football game the afternoon, I plan on playing this over and over:

•   The Blackhawks playing in the Winter Classic was a tradition unlike any other during the 2010s:

•   In 2004, the Yankees traded for a Gold Glove shortstop and moved him to third base. Eighteen years later, they are apparently considering trading for a third baseman and moving him to shortstop:

Yankees Have Reportedly Talked About Trading for Third Baseman Matt Chapman and Moving Him to Shortstop – https://t.co/MgBoKgHqM3 (via BN)