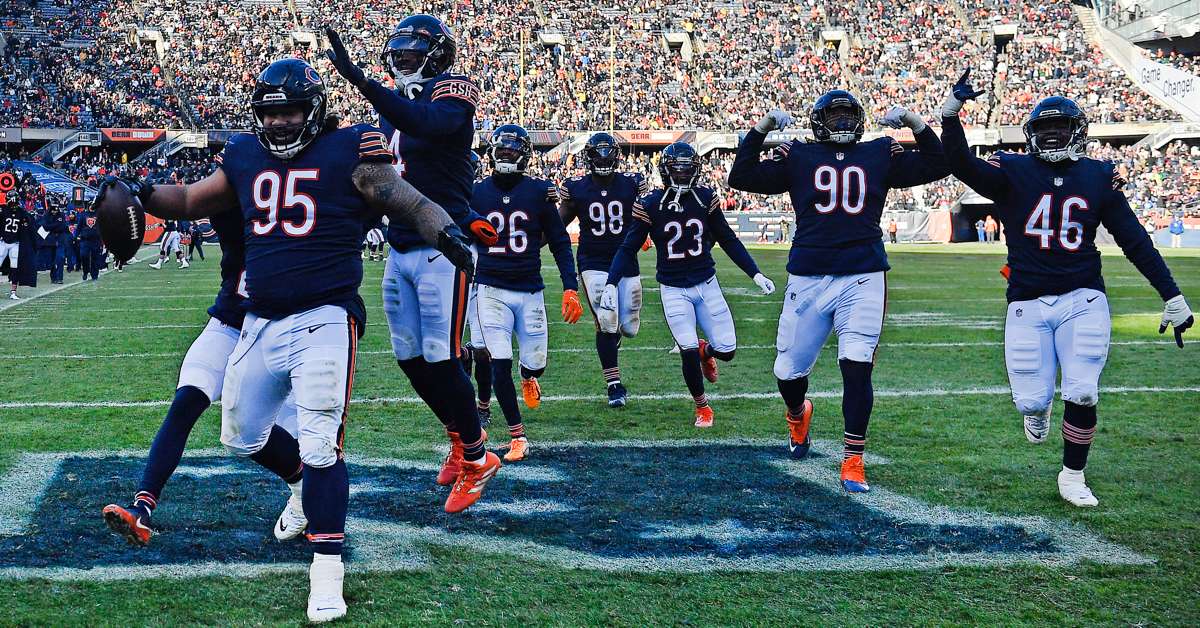 Considering how Giants owner John Mara was a driving force behind the taunting penalty point of emphasis that has driven us up a wall, it was only fitting that the Bears walloped the visiting New Yorkers beyond oblivion on Sunday at Soldier Field.

A resounding 29-3 win by Chicago’s football team is a reminder that the pizza isn’t only thing this city is better at when compared to its New York counterpart.

⇒   Any chance of a Mike Glennon revenge game was thwarted early. If anything, it turned into a Get Revenge on Mike Glennon Game:

In his first start at Soldier Field since Week 3 of the 2017 NFL season, Glennon was hornswoggled from the get-go. Glennon took a strip-sack on the game’s first drop-back. The Bears scored a touchdown one play later. And the rout was on from that point moving forward. Things only got worse for Glennon, who took a brunt of the body blows for the Giants. Glennon took 4 sacks and 5 quarterback hits to go along with throwing 2 interceptions and losing 2 fumbles.

It’s almost as if the Bears defense took his woeful play in Chicago personally. We know by fans definitely did.

⇒   There will be a desire in some corners of Bears fandom to rip-it-all-down to the bare bones and rebuild from the ground up. And while I’m not necessarily against a full-on rebuild if the situation calls for one, I must consider how Chicago’s collection of pass-rushers reminds me that this defense still has a worthwhile foundation. Just ask Khalil Mack:

Robert Quinn and Trevis Gipson are both under contract for the 2022 season. As is Khalil Mack. We’ve been gushing over Mack’s greatness for years now. But we’re finally starting to see some of GM Ryan Pace’s other commitments at the pass-rusher spot pay dividends.

This is why you shell out big bucks for a player of Quinn’s caliber:

HERE IT IS! The record-breaking sack by Robert Quinn! https://t.co/6t6AWyA7v4pic.twitter.com/nJIv9iXQeh

In his 15th game of the 2021 NFL season, Quinn now has 18 sacks, 21 quarterback hits, 4 forced fumbles, and a single-season Bears record previously held by Hall of Famer Richard Dent. The glow-up after a an ugly 2020 season has been nothing short of remarkable.

Opposite of Quinn today was Trevis Gipson, who continues to perform admirably in place of Khalil Mack. Gipson’s efforts on Sunday brought his numbers to 6.5 sacks, 3 forced fumbles, and 7 QB Hits while playing around just 49 percent of the defense’s total snaps this season.

This clip provides evidence as to why GM Ryan Pace is so willing to trade up in the draft for his late-round hits:

That Bears pass-rush is relentless. And while I’m certain there are a variety of ways to build one, Chicago might be wise to not tear this position group down and try to rebuild from scratch this offseason.

⇒   Of course, this game wasn’t without having Nagy’s fingerprints on it. Naturally, the fingerprints are muck based. Veteran Jason Peters started at left tackle ahead of Teven Jenkins. I’ll be curious to see if that was a coach’s decision to give the veteran a nod or if it was due to Jenkins’ limitations in practice this past week. Artie Burns was the team’s starting cornerback ahead of any number of young players who were deserving of a shot. And because it’s tough to tell up from down when trying to analyze Nagy’s decisions, Larry Borom – the rookie who was benched at right tackle last week to satisfy Germain Ifedi’s revenge/return game in Seattle last week – was starting at right tackle on Sunday against the Giants.

Admittedly, it would’ve been nice to get some young guys more reps to build on for the future. Then again, I imagine the veteran players appreciate the sign of respect and opportunity from their coach. While the decision to play young up-and-comers might be easy for us to make, finding a balance as a head coach isn’t as easy as we might otherwise want to believe.

⇒   In the interest of fairness, it was nice to see Nagy do some different things. We saw the Bears go for it on fourth down on multiple occasions. One of the fourth-down attempts turned into this:

Coach Nagy could’ve built up a ton of good-will among Bears fans had he been this aggressive on fourth down and with two-point conversion opportunities at any point over the last four years. Instead, we’re on the brink of changing courses with a new coach.

At the end of the day, that was a solid victory. In fact, they beat the crud out of those guys. And if that was Nagy’s last game coaching the Bears at Soldier Field, at least it was a memorable one.