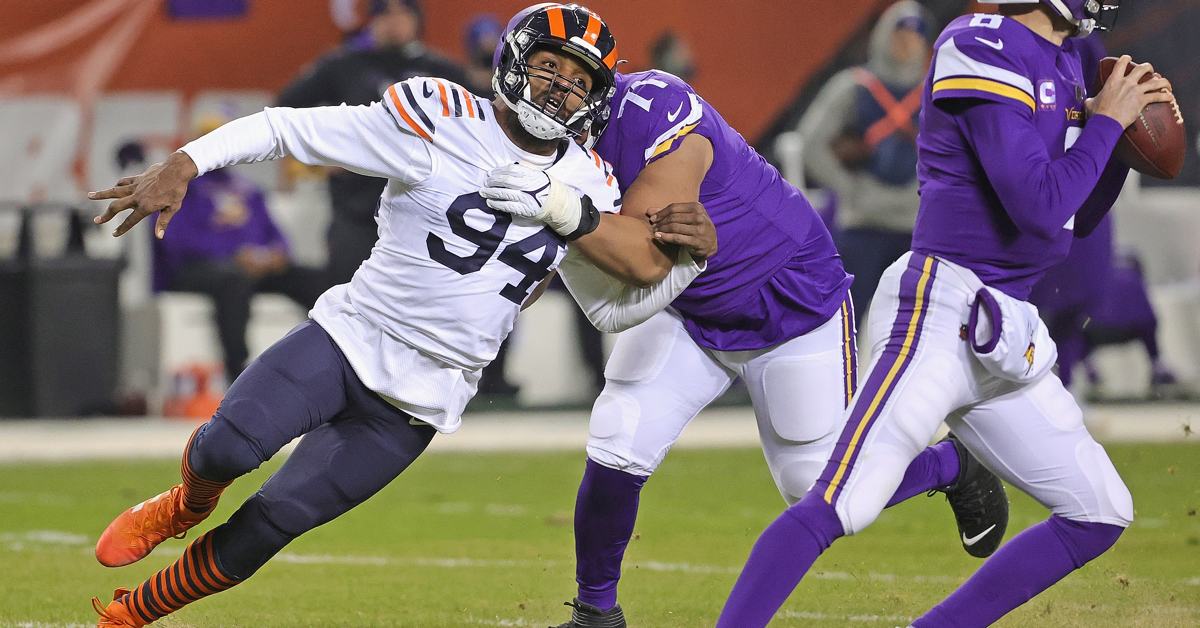 If it feels like we’ve been discussing Matt Nagy’s pending departure for a long time, it’s because we have. These rumblings began surfacing during the autumn months of the 2020 season. Fast forward to the second day of the 2022 calendar year, and the chatter remains. But at least we have a timetable regarding Nagy’s firing and the beginning of a coaching search.

•   In search of a reason to tune in for a game between the 5-10 Bears and 4-11 Giants? Look no further than No. 94 lining up for the home team today. Robert Quinn needs just one sack to pass Richard Dent for the Bears’ single-season franchise record. Dent’s record of 17.5 sacks has stood since 1984. Quinn’s next sack will break that record. And if he tacks on one after that, his 19 sacks will give him the distinction of having two 19-sack seasons on two different teams. Should Quinn pull it off, he’ll do so eight seasons after he first did it with the St. Louis Rams in 2013. Most impressive!

•   Here’s what the Bears will look like when taking the field in today’s home finale:

•   Opposite of the Bears today is a Giants team led by a name that is all too familiar around these parts:

Mike Glennon will start at QB for the Giants, per sources. It’s his show. There isn’t going to be a timeshare with Jake Fromm.

•   It’s not much of a consolation prize from not getting a Justin Fields-Jake Fromm game that would leave Kirby Smart twisting in the wind. But I don’t think there is a more perfect potential send-off game than seeing Andy Dalton square off against Mike Glennon. It was the Bears giving Glennon $18.5 million in guarantees for what was ultimately four starts in Chicago that got the ball rolling on this window that seems on the brink of closing once Week 18 wraps up. With Fields unavailable and Nick Foles backing up Dalton, this game will feature $49.5 million worth of contracts Pace gave out to bridge quarterbacks since the start of the 2017 season. Simply put, that’s just not smart spending.

•   The last time the Bears saw Mike Glennon, it was Week 16 of the 2020 season. In that win against the Jaguars, Chicago came through with one sack and four QB hits. More of the same figures to be on the menu for a Giants team whose QBs have taken 31 sacks in 15 games.

•   ESPN college football analyst Kirk Herbstreit was getting roasted from all angles for his take that today’s college football players don’t love the game as much as they did long ago. Herbstreit was critical of players opting out of bowl games, choosing to prepare for NFL careers instead of suiting up for non-playoff postseason games. Network teammate Desmond Howard joined the chorus. You can watch the exchange between the two below:

and, as befits a show that shouldn't even need to be on, the hosts are wilding out with "today's youth are entitled and it's the fault of video games" nonsense pic.twitter.com/4EdBFuTivH

•   Nearly 12 hours later, Ole Miss quarterback Matt Corral – a projected first-round pick and possible QB1 in his class – suffered a serious leg injury while being sacked in the first half of the team’s Sugar Bowl loss to Baylor. Corral was helped off the field, sent to the locker room for X-rays, and returned to be with his teammates while on crutches. Seeing the Ole Miss QB go down was a reminder of how this game can be so brutal. And why players were opting out in the first place.

•   Corral’s injury also highlighted how narrow-minded the viewpoints of Herbstreit and Howard are in this discussion. Back when those guys played, there were a dozen or so bowl games. But a watered down bowl season with nearly 40 games and players wising up to how they are risking careers while not getting a fair chunk of the monetary pie that Bowl Season™ generates has led us to this point. My hope is that people will reel in unfair criticisms of players trying to protect their future while others make big profits for their on-the-field work. Let’s face it. The criticisms of coaches Brian Kelly and Lincoln Riley leaving their schools before bowl games while looking out for the betterment of their financial futures were non-existent.

•   As for the games that were played, that Ohio State-Utah game was a doozy of a Rose Bowl. The teams put up a combined 93 points in a game featuring touchdowns by a walk-on freshman at Utah, as well as the son of an NFL Hall of Famer on Ohio State:

As called on Utah radio: pic.twitter.com/zOONogutf7

•   Even with first-round caliber WRs Chris Olave and Garrett Wilson opting out of playing in the Rose Bowl, Ohio State has a receivers room that would make some pro teams (read: The Bears) insanely jealous.

•   No doubt this idea crossed the mind of Bears fans:

Re: Ryan Day’s future… You don’t see a lot of Bears QBs throwing for 573 yards in a game. They could use a little of that.

•   Then again, after watching Urban Meyer flop in spectacular fashion when jumping to the NFL, maybe Ryan Day will run it back with C.J. Stroud and that collection of pro-caliber offensive talent at Ohio State in 2022.

The Nagy Family is making a personal $7,600 donation to the Parker Dickerson Fund because @DickersonESPN predicted last spring that the Bears would draft OT Teven Jenkins, which they eventually did. Jenkins wears No. 76 for the Bears. Now $7,600 more for Parker Dickerson. https://t.co/580JQpzLWt

•   Whether it is as a reporter, a co-worker, or as a family member, folks are going to miss Jeff Dickerson. And this is quite a gesture by the Bears:

Always my first hello & smile in the press box in the early morning hours of game day… you are so so dearly missed JD.

•   Not that you needed a reminder, but just in case you did, here’s a refresher about how much fun the Bulls are:

•   And on the other end of the fun spectrum:

•   Things didn’t go all that great while Tyler Chatwood was in Chicago. But I’ve seen this play out to where a guy leaves MLB, plays in Japan, discovers something new, returns to play stateside, and then figures it out. I’m rooting for another one of those stories here: