Quinn Gets the Call, Roquan Tackles All, Robinson's Recovery, Chasing Chase, and Other Bears Bullets Skip to content 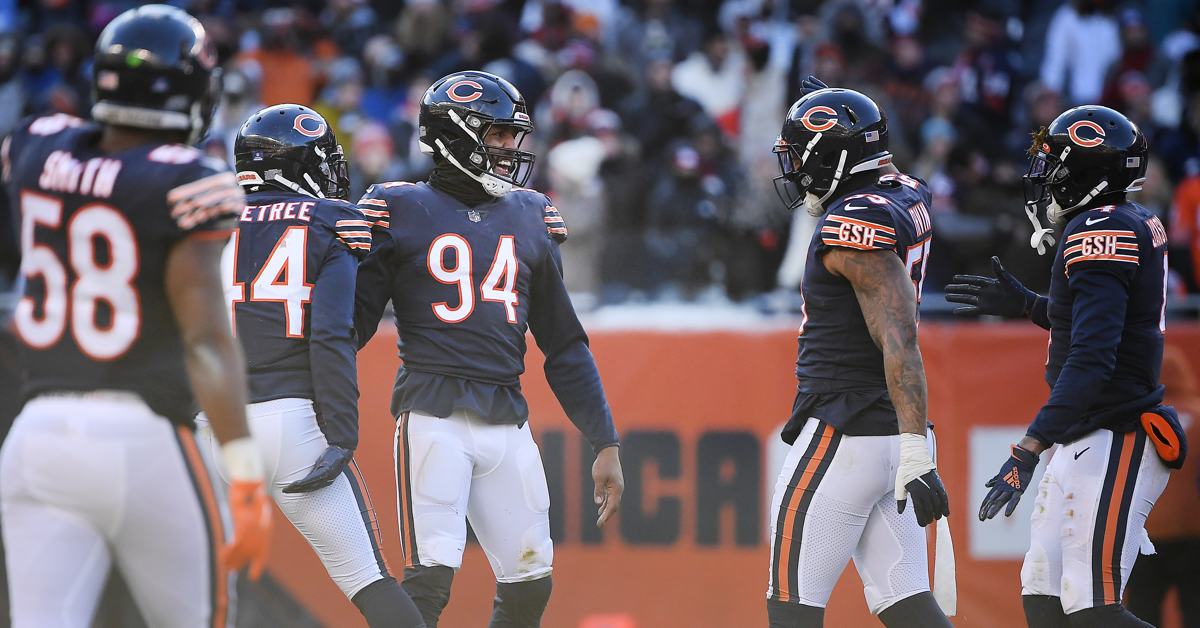 Gonna enjoy the Bears being undefeated in 2022 while I can.

•   My biggest takeaway from Week 17 of the 2021 NFL season is that Justin Fields needs his own Ja’Marr Chase in 2022. Because in the most-fun non-Bears game on Sunday, Chase went off with Joe Burrow and that tag team led the Bengals to a win against the defending AFC champion Chiefs that ultimately clinched the AFC North title for Cincy. Burrow went 30-for-39 for 446 yards, 4 touchdowns, no interceptions, and a 148.0 passer rating. As for Chase, he put up 11 catches, 266 receiving yards, and 3 scores. This was the best of the bunch:

Ja'Marr Chase turned this into a TD pic.twitter.com/dNh3ADIxXD

•   After the game, Chase Twitter-dunked on Chiefs cornerback Charvarius Ward:

•   Substance, swagger, and a mean Twitter game? Where do I sign up for the Bears to get one of THOSE types of receivers?

•   FWIW: This looks to be a loaded receiver class, which bodes well for Chicago. And if you want something to dream on, the Bengals are a blueprint. Yeah, I can’t believe I typed that sentence out either.

•   On the other side of the ball, Robert Quinn breaking the Bears’ single-season sack record made our day. And I imagine receiving this call was awesome for him:

You know you are living right when Hall of Famers Richard Dent & Jimbo Covert are giving you love.

And for Robert Quinn, it’s much-deserved!

•   The Sun-Times (Mark Potash) and Tribune (Dan Wiederer) have one perspective from Quinn, who said it was an honor and a blessing to break a record that had been set in 1984. Any time you’re breaking a Hall of Famer’s record, you’re living right.

•   And with his takedown of Mike Glennon to the turf for the record-breaker, Quinn did something proving time is a flat circle:

•   Between Quinn’s killer season and the uncertainty regarding what direction the Bears will go in moving forward, there will be chatter surrounding the idea of dealing the pass-rusher this offseason. It’s a move that could clear cap space and (in theory) add draft capital. But it would also create quite a hole on the defense. I’m not ready to go down this rabbit hole yet. However, just know that it is bubbling under the surface.

•   In addition to his interviewing skills, Roquan Smith had another 9 tackles (6 solo) and 2 tackles-for-loss. That brings him to a career-best 157 total tackles to go along with 93 solo tackles, 12 tackles-for-loss, and 3 sacks. It was certainly a Pro Bowl caliber year for Smith, who was snubbed for a second straight season. Maybe he’ll slide in as an alternate. Or perhaps he’ll snag first-team All-Pro honors. There is certainly a case for it.

•   Even given the caveats that (1) it’s the Giants, (2) Mike Glennon stinks, and (3) I’m pretty sure I’ve seen some of those receivers doing “Bing Bong” memes wearing hard hats, this is still kinda impressive:

The #Bears secondary allowed just 12 passing yards against the Giants, per @PFF. That ties for the fewest yards allowed by a secondary all season.

Kudos to Sean Desai for what he's been able to do with this group down the stretch.

•   Devontae Booker was the Giants’ leader in receptions (2), which net him a grant total of zero (0) receiving yards. Kenny Golladay, who was a Bears offseason target before signing with New York, was given just one (1) target.

•   The quarterbacking in Sunday’s Bears-Giants game went: 22/46, 197 yards, 1 TD, 3 INT, 6 sacks, 4 fumbles, and a 39.9 passer rating. I can’t believe Bears GM Ryan Pace gave the quarterbacks participating in yesterday’s contest $28.5 million worth of guarantees for what turns out to be nine starts.

•   It’s really difficult to call these late-season games meaningless when someone like Bears Defensive Coordinator Sean Desai can continue to use these games to put out quality tape and make a name for himself as an assistant. Sure, it’s been something of a rollercoaster for the first-year DC. But the pass-rushing schemes have been productive with the Bears netting 46 sacks. Only the Rams (47) have more. I’d have an interest in seeing what he can scheme up with a healthy secondary that isn’t relying on Artie Burns getting starter’s reps.

•   Meanwhile, the Giants served up a nice reminder of how out of whack they are as an organization:

Judge spoke for over 10 minutes when asked why fans should have faith that he can right the ship. His overriding message was that the foundation and culture have been set up for success despite the results.

• Judge said impending free agents have been in his office begging to return.

• Judge said he gets calls twice a week from players who signed elsewhere for more money wishing they were still in NY.

• Judge said he’s not going to publicly blast players like a “coward.”

There are 19 Giants from 2020 on other teams this year. The only two who make significant money are Dalvin Tolmlinson and Kevin Zeitler. 8 are on a PS. The rest are around the minimum, so Im not sure how many are really doing this. https://t.co/OJXwBffiXp

•   Giants Head Coach Joe Judge sounding like he’s the magical man from Happy Land living in a gum-drop house on Lollipop Lane is not what I was expecting after his team got its doors blown off by these Bears. Think about it. Chicago’s football team has been in turmoil for the better part of the last 365 days. And it out-classed the heck out of a New York football outfit that was a popular pick in some corners to be a playoff contender after missing out on the dance because the Eagles were tanking in Week 17 last season.

•   A valuable lesson Bears fans learned last year and can pass on to others moving forward: If you have to oversell when speaking about your team’s culture, then it isn’t where it needs to be. And it certainly isn’t where you think it is.

•   Dang! Allen Robinson II really went through it to play on Sunday:

#Bears WR Allen Robinson he told me that he was put on an IV drip last night as he struggles to regain weight from having had COVID-19. Told me he will do another IV drip before the game starts today.

•   In what might be his final game as a Bears receiver at Soldier Field, Robinson put up a 4-35-0 line. But he did snag a nice one on a slant route coming out of the slot that moved the chains. It’s almost as if moving Robinson around formations and having him run a variety of routes instead of one hitch after another would be a better way of deploying a receiver coming off consecutive 1,000-yard seasons.

•   Teammate Darnell Mooney is just 71 yards from his first 1,000-yard receiving season. That Mooney was able to get past the 900-yard market after 16 games is a nice feather in the cap for the second-year pass-catcher. Mooney hasn’t fully established himself as a WR1, but his development has been an absolute treat that has been worth watching this season.

“Had this had worked it would have been a thing of beauty” #JohnMadden 😂😂😂 @BUrlacher54 https://t.co/SwoOSAcwdx

So this angle is incredible 😱