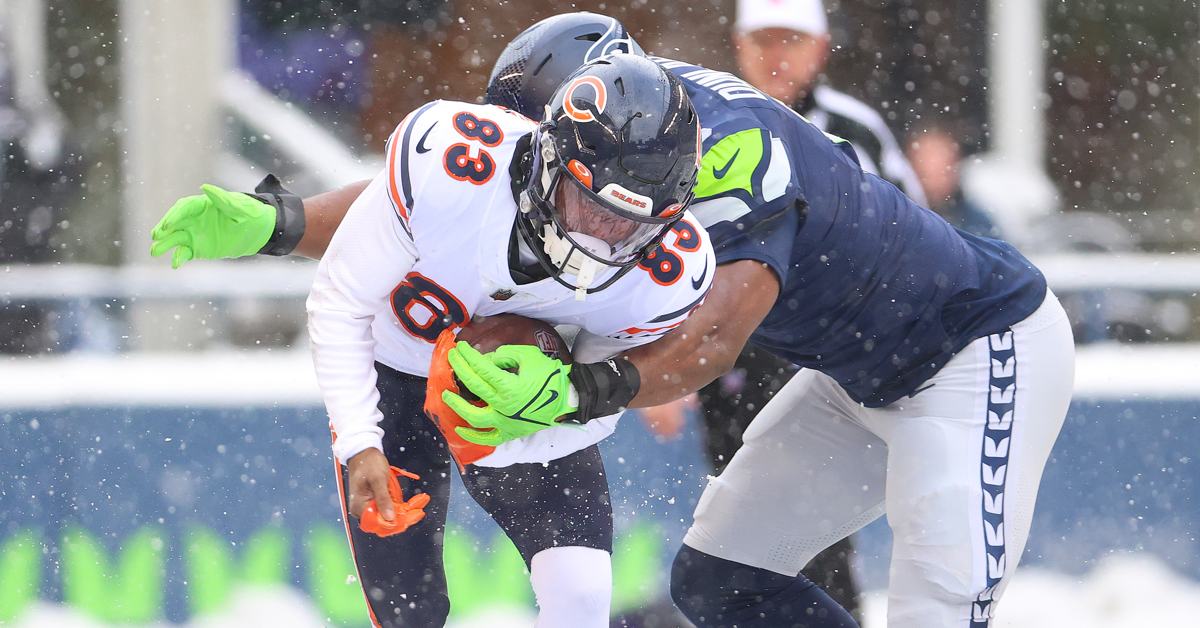 I have taken advantage of the exploration phase of the start of a new calendar year by baking sea-salt caramel chocolate chip cheesecake brownies. It certainly is a mouthful.

•   After the removal of tight end Jesper Horsted and linebacker Joel Iyiegubinwe, the Chicago Bears have no players remaining on the NFL’s Reserve/COVID-19 list. It’s a small step, but one worth celebrating. New year, new healthy Bears!

•   Now that we’re in the clear in that regard, here are some collection Bears players who should get an extensive look in the season finale: LT Teven Jenkins, RT Larry Borom, RB Khalil Herbert, WR Dazz Newsome, CB Thomas Graham Jr., NT Khyiris Tonga, OLB Trevis Gipson. There are more, but these are at top of mind right now.

•   Get Herbert some extra carries in place of David Montgomery. There will be no second consecutive 1,000-yard rushing season for Montgomery, who is averaging just 3.3 yards per carry since turning the calendar to December. The workhorse could use some rest. Give Newsome reps in the slot as a receiver, as well as in the punt return game. Allow Tonga to play the amount of snaps one would usually reserve for Eddie Goldman. Present an opportunity for Graham Jr. to play a full set of game snaps to see if he can be someone worthy of duking it out for a starting gig next year.

•   I do not want to re-visit this tweet next week:

In a game #DaBears had full control of from the first snap & led by double digits for 50+ minutes.

•   What if I told you Robert Quinn has been better statistically the last month+ than he was when he won the NFC’s Defensive Player of the Month award for November. Quinn has 7 sacks, 8 quarterback hits, 6 tackles-for-loss, and 2 forced fumbles in five games since the beginning of November. And while he still has one more game to pad those stats, maybe Quinn deserves an afternoon off in the season finale. At minimum, he should be allowed to clock out early if he so chooses.

•   If Quinn *DOES* play, he might be facing a decimated Vikings offensive line. Minnesota has put guard Ezra Cleveland, as well as tackles Christian Darrisaw and Brian O’Neill on the COVID reserve list. Nothing like putting three starting offensive lineman out of action before the season finale. I guess the Vikings should consider themselves lucky that this is a “meaningless” game. Because it went down at the beginning of the week, each of these players could gain clearance in time to play on Sunday against the Bears. But if they don’t, any number of Chicago defenders should see this as a wonderful opportunity to fatten up at year end.

•   Pittsburgh beating Cleveland on Monday Night Football gave QB Ben Roethlisberger a made-for-TV exit in what will likely be his final home game with the Steelers. Statistically, it wasn’t one to remember as Roethlisberger went 24-for-46 for 123 yards with 1 TD, 1 INT, and a 56.3 passer rating. If you’re trying to keep score at home, that’s a 2.7 yards per attempt for Roethlisberger. Big yikes.

#ThoughtsAndPrayers for anyone who lost their fantasy championship on this garbage time score.

When you lost the fantasy Super Bowl on that Najee Harris run 😭 pic.twitter.com/IWAhAEoM3t

Everyone who won a fantasy championship because of Najee Harris waking up like… pic.twitter.com/MfGeHFLCwE

•   Fun fact: Had you started defenses facing Mike Glennon during the last two weeks of the fantasy playoffs, you would’ve gotten 21 points (from the Bears) and 16 points (from the Eagles). So … I’m hoping you were able to capitalize on that if you were going for the gold the past few weeks.

•   Jimmy Graham’s two years with the Bears hasn’t come with the type of production one might want, but it has been fun to see him continue to grow his community efforts. Some things are bigger than football:

Jimmy Graham is trying to be "more or less the role model that I never had."@ChiTribKane's story on how the Bears TE is trying to help others, with his money, his words — and his flying.

"I'd be honored to be a pilot who can provide that opportunity."https://t.co/iJs9Xm3KSf

•   Some good news from the injury front:

#Bucs star WR Chris Godwin underwent successful surgery to repair his ACL and MCL, a procedure performed by noted expert Dr. James Andrews in Florida today, source said. There was no meniscus damage for the pending top free agent, who will make a full recovery.

•   Chris Godwin’s ACL and MCL injuries came at an awful time for him (as a player who was on pace for a 1,300-yard receiving season) and his team (which was rolling to a possible top-2 seed in the NFC playoffs). But seeing news of no meniscus damage is a good sign for the free-agent-to-be. I’m not entirely sure what Godwin’s market will look like, but the receiver-needy Bears should check in should Tampa Bay not extend the Franchise Tag again.

•   NFL Network insider Ian Rapoport also reports Michael Gallup’s ACL tear was a clean one, which means his season is over BUT will make a full recovery. That’s good news for a receiver who figures to get plenty of attention when he enters free agency. (Sup, Bears?)

•   This was an eye-opening read that puts into perspective the nepotism that runs wild in NFL circles:

I counted 111 NFL coaches who are related to a current/former NFL coach. How does that impact the league's goal of increasing opportunities for minorities?
One coach said:"If I don’t have a last name that is recognizable, then it’s kind of for nothing."https://t.co/SKRiacAIdM

•   Even though the Bears have long been eliminated, I suppose sharing this for planning purposes makes sense:

•   Something to keep an eye out for later today:

•   Well, this is certainly awesome:

Ronald Acuña Jr., Liam Hendriks, Didi Gregorius, Kevin Kiermaier and so many other big leaguers have played in this league before. This is a huge, awesome deal.https://t.co/C6HLehlX4F pic.twitter.com/m3AwTQnMO5

All Rockford IceHogs Have Been Removed from COVID Protocolshttps://t.co/JFBTgwfcie