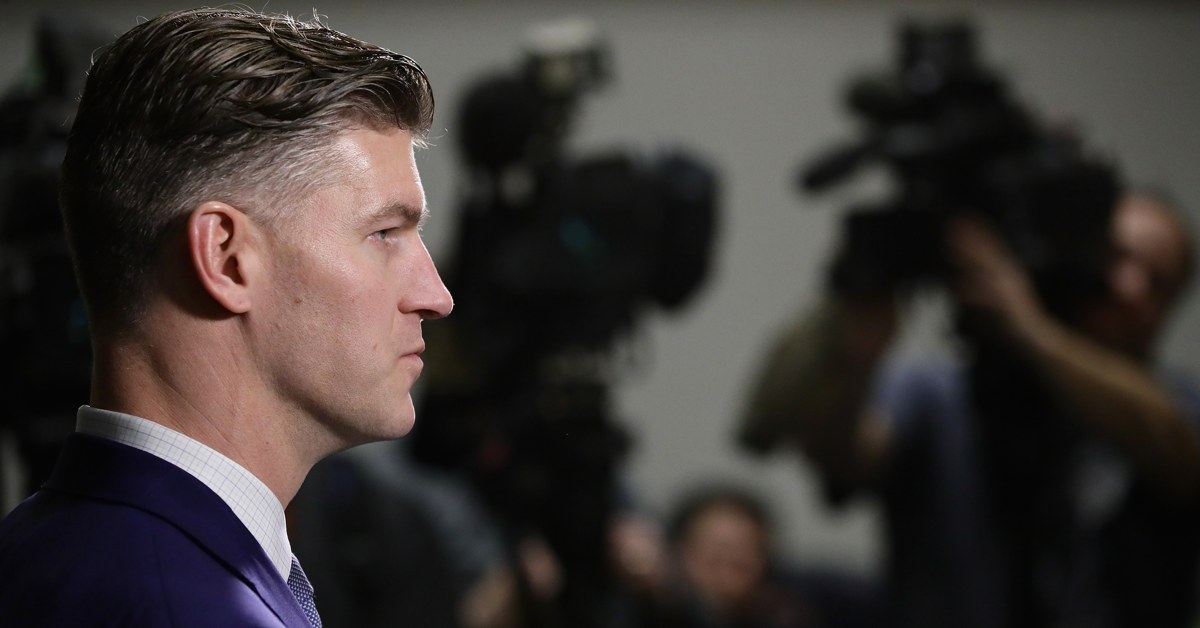 It seems unfathomable that a football team would retain a general manager whose record with the team is an unsightly 48-64 and has just two postseason appearances (and only one winning season) over the last seven years.

But these are the Chicago Bears we’re talking about here. And they tend to make things that might be unthinkable in the eyes of some actually happen, for better or worse.

With that being said, there is no clarity regarding General Manager Ryan Pace’s future with the team. However, it sure is starting to sound like he is sticking around at Halas Hall in one way or another.

Not to be lost in his reasoning behind not wanting to vote for Aaron Rodgers as league MVP, 670 The Score analyst/Pro Football Weekly Executive Editor Hub Arkush dropped this nugget:

.@Hub_Arkush on Ryan Pace's future with #Bears: “What I’ve heard from several good sources is that Ryan is probably going to be remaining with the organization (in some capacity) … It's better than 50-50 that Ryan Pace sticks around."

Arkush handicaps Pace’s return to the Bears for an eighth season as being a “better than 50-50” shot. That’s markedly higher than you would expect for a GM whose team’s winning percentage is .429 since taking over for Phil Emery in 2015. But it’s the staying in the organization “(in some capacity)” that is doing the heavy lifting here. And for what it’s worth, Arkush isn’t alone in seemingly hearing this from sources.

Brad Biggs (Tribune) shared the following in the latest installment of his weekly mailbag:

I can tell you in talking to people around the league, there definitely is a portion of folks who believe he has a good chance of remaining with the Bears either in his current role as general manager or in some other capacity on the football side of things. …  I can tell you once source I spoke to earlier this week said a little more than a month ago, he would have put the chance of Pace staying at slightly higher than 50%. Now his belief is Pace’s chances of remaining with the Bears is greater than that.

Oh, my! Now we have two long-time Chicago football insiders hearing about the growing likelihood that Pace returns. And both reporters are hearing that Pace might not necessarily come back in a GM role. That we’re continuing to hear and read about the potential of a re-shaped front office in conjunction with rumors of the team retaining Pace hints at the possibility that the Bears could try to have their cake and eat it, too.

And it reminds us that this has been a realistic possibility longer than we were wanting to believe.

Because even when reports of the Bears reportedly doing homework on GM candidates came out, there was a mention that Pace could still remain in some other organizational role. And while there have been ample rumors about Head Coach Matt Nagy’s future, it’s been all quiet on the Pace front.

It’s worth noting that NFL Network insider Ian Rapoport said the Bears would start their head coach search after Week 18. But a week before, said he hadn’t heard that Pace’s job was in jeopardy (even though he made it clear that Nagy could be in trouble). Trying to read tea leaves through the fog is challenging. But we could have a situation where Chicago has a new head coach, someone new hiring a head coach, and both of those people answering to someone above them, who ultimately answers to ownership and management.

That’s a lot to take in, but it’s something that has a realistic chance of happening. This is the Bears, after all. Anything can happen. Especially if it isn’t doesn’t line up with expectations. Save for Rian Johnson’s exploits in The Last Jedi, no one goes out of their way to throw you off the scent like Bears upper management.

Trying to win two-front wars is never easy. And that’s what the Bears seem to be trying to do if they’re exploring GM candidates, while also considering keeping Pace. The Bears trying to middle when it has become clear change is necessary is painfully on brand. But what if it works? Follow me for a moment…

What if removing Pace from the GM seat allows the team to put some new eyes on old problems? And what if, by retaining Pace, the Bears keep someone whose opinion they value enough to make the face of the upgrades and renovations at Halas Hall while making their team better? Perhaps ownership sees Pace’s football calling as being bigger than making picks on draft weekend, creating trades, and signing free agents. Keeping Pace wouldn’t make everyone happy, but re-assigning him could get the ball rolling on making necessary changes elsewhere.

For what it’s worth, we saw the Bulls do it by kicking John Paxson upstairs with a promotion. The Artūras Karnišovas and Marc Eversley tag team work wonders with Paxson out of the decision-making process. Heck, we’ve even seen the Bears do it in 1999. It was a different time and circumstance, to be sure. But moving Michael McCaskey out of the president’s chair in 1999 and installing the leadership structure that still remains today was a necessary change at the time. OK, maybe that last one isn’t the best example. Especially since it’s long been time to move on from that power structure. But the process still stands. And the moment still counts as a data point for our conversation.