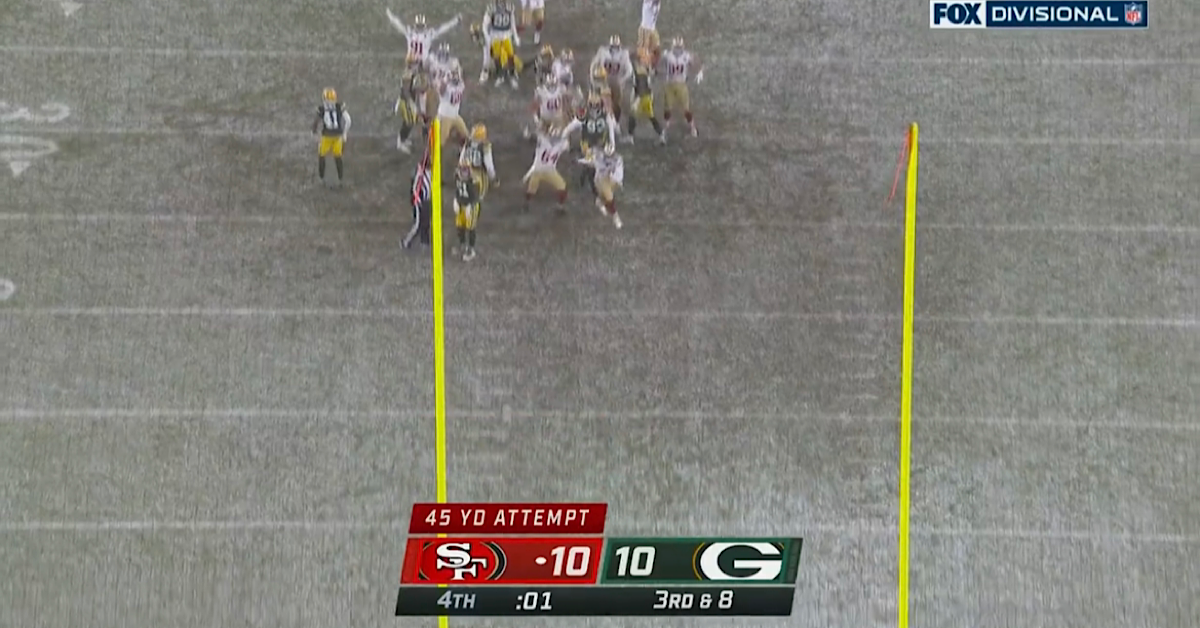 Thirteen regular season wins. Home-field advantage throughout the NFC playoffs. A top-10 scoring offense and a defense that gave up the 13th fewest points. And the motivation of what might be Aaron Rodgers’ last dance in the land of cheese.

But in the end, it was a former Bears standout who sent Green Bay packing:

THE @49ERS WIN IN LAMBEAU TO ADVANCE TO THE NFC CHAMPIONSHIP. #FTTB #NFLPlayoffs pic.twitter.com/7JouarMybq

Robbie Gould ended the Packers season. Leave it to an ex-Bear to get the job done where so many other Bears have fallen woefully short. It’s fitting in so many ways. A special teams that failed the Packers at so many turns throughout the season faltered again on Saturday night. And on the other side of the field, special teams lifted an otherwise woeful offensive showing from San Francisco.

Gould’s 45-yarder was a game-winner, and will get the headlines for all the obvious reasons. But it was this special teams play that gave San Fran a real shot in the arm:

IT. JUST. GOT. INTERESTING.

The 49ers had just 12 first downs, 212 yards of total offense, came up empty in three red-zone trips, and led for exactly 0 minutes. But they’ll move on to the NFC Championship Game because they had more points at the end of four quarters. That’s how this thing works. And the Packers move on, too. But instead of hosting another playoff game, Green Bay shifts its focus to an offseason where questions surrounding a quarterback who swears he won’t drag things dramatically after the season ends.

I guess we’ll see about that.