Re-Visiting the OT Rules, Are the Coaches Actually Good or Just Trendy? And Other Bears Bullets Skip to content 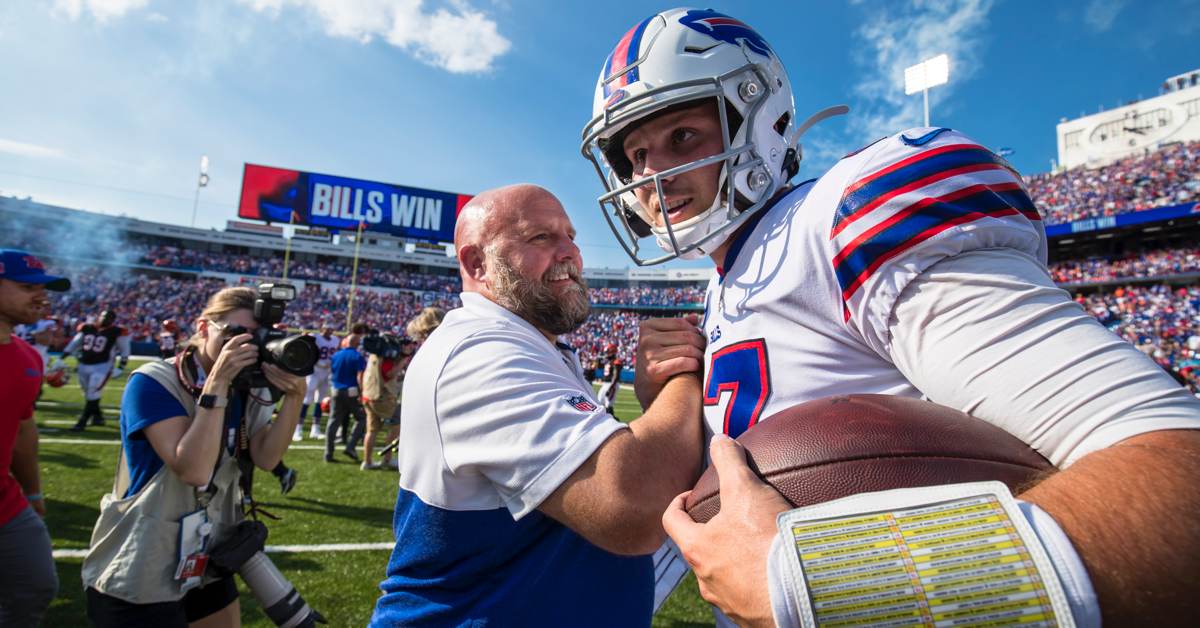 So … how was your weekend? Good as Gould, I hope.

•   It is absolutely messed up the Bills weren’t able to get a shot at answering the Chiefs’ overtime touchdown. Don’t get me wrong. I understand the rules. And I realize there is a prisoner-of-the-moment aspect to this. Even still … I could’ve watched those two teams rack up points all night and until the sun came up. But there are probably labor laws that would prevent that logistically. Nevertheless, I was hoping that game would never end. It had everything you would want from a Super Bowl, but in a Divisional Round game. That is how football should look.

•   One of these days, I want some NFL broadcast production team to make “The Coin” the game’s MVP if it goes to overtime:

If you are still arguing, in a game like that, it’s not in best interest of EVERYONE that both Mahomes and Allen get the ball in OT I don’t know what to tell you.

In a game where neither team could stop the other at the end, a literal coin flip determined the ending.

•   Here is hoping the NFL re-visits playoff overtime rules. My preference would be to play an entire quarter. But I realize that might not be in the best interest of player safety. But there has to be a different way to do it. For what it’s worth, if there is a way to profit handsomely from changing the overtime rules, then the NFL will (1) find it and (2) implement it for the upcoming season. That’ll be too late for the Bills, but not so much for the game as a whole.

•   Yesterday was not a good one for the defensive coaches who happen to be on the Bears’ wish list. Not when Leslie Frazier’s unit was leaving Travis Kelce open up the seam with 13 seconds left. Or when Todd Bowles’ defense can’t cover Cooper Kupp. And is throwing blitzes against Matthew Stafford despite this being a thing:

Matt Stafford vs the Blitz:

4th in PFF Grade
1st in EPA/play by a mile

•   Meanwhile, the offensive coaches were having a ball. The Chiefs put up 42, and Eric Bieniemy figures to be getting some call-backs soon. Brian Daboll’s offense put up 36 in a losing effort. Byron Leftwich’s gang in Tampa put up 27 points in the second half of yesterday’s defeat. The Bears scored 27 in just three games in 2021 and on just 11 times in 50 games since the start of the 2019 season. So much offense. Where do I sign up?

•   I’m not even sure Bears QBs had this many deep targets all season:

» Most 10+ air yard TD passes over a two-game stretch in the NGS era (since 2016)#BUFvsKC | #BillsMafia pic.twitter.com/BRI9oZmLz2

•   Related reading: Mark Potash (Sun-Times) explores if Bills OC Brian Daboll is the truth or just another hot-at-the-time offensive coordinator candidate, as this is the challenge all these coaching-starved teams are trying to conquer.

•   This should be Exhibit A as to why the Bears should be angling for an offensive-leaning coach:

The final four all ranked in the top ten in pass EPA per play this season, a trend that has been going on for multiple years now:#Chiefs – 2nd#Rams – 4th#49ers – 5th#Bengals – 9th

Every teams’ top priority should be building pass offenses that can keep up.

•   Of course, it isn’t to say that Chicago’s football team should pigeonhole itself into focusing only on offensive coaches. After all, we saw special teams trip up the NFC’s top-seed and defense lift the up-start four-seed in the AFC. But I understand why it’s working.

•   Watching Cooper Kupp cook everyone in Tampa’s secondary had me in my bag:

Remember when Ryan Pace and his front office and coaching staffs wasted their exclusive 2017 Senior Bowl experience? Had a whole week with eyes on Cooper Kupp and a bevy of others and came away with only Jordan Morgan. What a waste.

•   For someone who was trying so hard to be Andy Reid, why weren’t Matt Nagy’s press conferences this entertaining?

"When it's grim be the Grim Reaper."

Andy Reid on what he said to Patrick Mahomes when they were down late in the game. pic.twitter.com/kIIj2rdqOL

•   The works of art that have come out this postseason have been chef’s kiss good:

It was a good weekend. pic.twitter.com/Jb1XA5120c

As compelling as Chiefs, Bills was, and their can’t be any dispute it was great theatre and an instant classic, you do have do ask yourself was the last 2:00 and OT great football or atrocious defense?
Other than the Kelce winner there wasn’t a contested catch in the bunch.

•   I imagine the interview was simply Mr. Ryans showing up and asking: “Did you watch Saturday night’s Packers-Niners game? Whaddya think?”

We have completed an interview with 49ers Defensive Coordinator DeMeco Ryans for our open Head Coach position.

•   I feel like I have a football hangover. What’s the remedy? Seriously. I don’t want to feel like this all day.

•   Noise-cancelling headphones, soaps and shower gels, surge protectors, battery backups, and more are your Deals of the Day at Amazon. #ad

•   Not only did the NBA give Grayson Allen the “go to your room and think about what you did” punishment, it did so while allowing him to have dessert, too. And the Bucks made it weirder by releasing a statement:

The Bucks Just Issued a Bizarre Statement AGAINST the NBA’s Decision on Grayson Allenhttps://t.co/kR8oOD4TgQ pic.twitter.com/N3Cq3uAZnz

•   Optimism was high to start the year. And with good reason. But this Blackhawks thing hasn’t been anything near as good or fun as we were hoping: