Marinelli Chimes In, Daboll vs. Eberflus, Fan Vote Matters, and Other Bears Bullets Skip to content 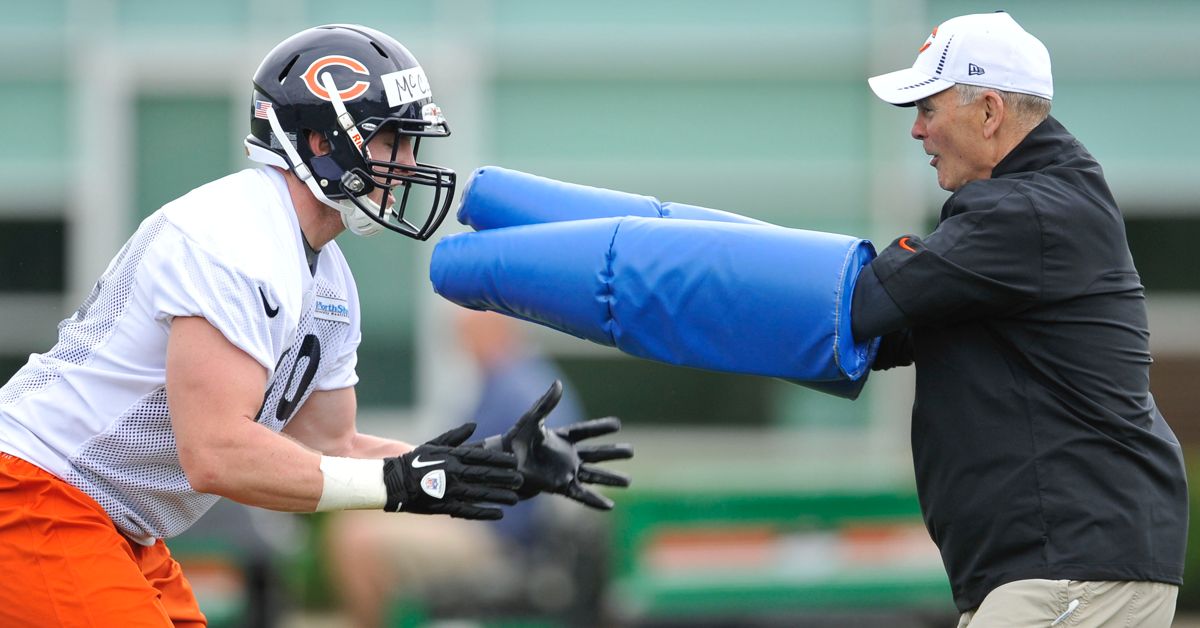 It took 29 days, but I’m finally back into doing meditation through the Headspace app. Admittedly, it shouldn’t have taken me reading about DeMar DeRozan championing the importance of mental health to fully get back into good habits. But better late than never … right?

•   Matt Eberflus is getting his flowers. Friends, former co-workers, and ex-players are publicly singing the praises of Chicago’s new football coach. This is standard protocol when a new coach gets hired. Save for Tim Brown shredding the Marc Trestman hire (and then getting to say I told you so), there is nary a negative word to say about a guy getting a big promotion. With that in mind, we should be careful as we take in all these happy vibes. And yet, I found myself bug-eyed when seeing this quote from Rod Marinelli (bold emphasis mine):

“I think he’ll rely on his intelligence,” Marinelli said. “He’s very consistent, and he’ll take time to make good decisions. I feel very strongly about that. And he’s a leader. He’s going to take that franchise, put it on his back and help lead that franchise.”

•   Because the Chicago Bears power structure is what it is, the general manager and head coach — the two “football guys” as Chairman George McCaskey often calls them — are the two most important people in the organization. Those two will do a ton of heavy lifting while McCaskey gets to be a fan and President Ted Phillips signs checks. Some people are built for that kind of responsibility. Others aren’t. We’ll see if this tandem is in a few years.

•   FWIW: Marinelli was a Bears defensive coach from 2009-12 and coached with Eberflus while with the Cowboys. In other words, Marinelli is well-positioned to understand (1) the responsibilities Eberflus will be taking on in his new role and (2) what kind of person Eberflus is/needs to be to thrive despite the added pressures that come with it. This isn’t to say Eberflus will knock it out of the park. No one knows if this thing will work. However, the perspective from Marinelli is worth sharing.

•   Patrick Finley (Sun-Times) gets thoughts from Gary Pinkel, the long-time Missouri football coach who had Eberflus running his defense from 2001-08. Like Marinelli, Pinkel believes Eberflus is built for the challenges ahead. I’m just looking forward to identifying what they are and seeing how Eberflus handles them in the days, weeks, months, and years to come. If he does as well as he did after inheriting that mess of a colts defense, then I think we’ll be pleasantly surprised with the outcomes down the line.

•   Let’s be clear. There is so much that needs to be done. And we should keep that in mind as we take steps forward in following this new regime. Brad Biggs (Tribune) depicts the situation that Eberflus and new GM Ryan Poles are walking into as one that needs some work. And these Bears surely need it moving forward. There are plenty of questions, but at least there is are new eyes looking at old problems.

•   Lance Briggs and Charles Tillman made pitches on Twitter for Marinelli to be the Bears’ next defensive coordinator. And why not? Marinelli has done with the Bears (2010-12), Cowboys (2014-19), and Raiders (2020) on an interim basis. But at age 72, I wonder if that is a job he’ll want again at this stage of his career. Don’t get me wrong. If he wants it and wants to interview for it, go right ahead. But maybe there is a Senior Defensive Assistant title in the future for Marinelli, who has been coaching in the NFL since 1996 and doing it as a profession since being a defensive coordinator at Rosemead (Calif.) High School in 1973.

•   Let the record reflect that Matt Eberflus got one over on Brian Daboll in their most recent meeting:

Eberflus vs Daboll was a good outcome for Flus. pic.twitter.com/ElBWzeloQ1

•   The keys winning football are simple. Give the ball to an MVP candidate (Taylor’s version) and limit the opposing team to 15 points. Why don’t more teams do this?

•   I’ll be curious to see the results of this poll:

Regardless of whom the Bears hired, you as a Bears fan would have been …

•   Per CBS reporter Jason La Canfora, “sources close to Tom Brady” think he is preparing for retirement and that “several sources in Brady’s inner circle” are expecting him to reveal his plans in the coming days. The phrasing and framing aren’t strong, but it is still worth sharing as part of the conversation:

I re-created the epic final minutes of the Chiefs-Bills divisional round playoff game in the style of the 8-bit video game Tecmo Super Bowl. 😳 pic.twitter.com/xf8feKoBVG

•   I’m looking forward to a day where the Bears are in a game that deserves the treatment of the video above.

Day 20: Reminder to vote for me EVERY DAY through February 6th at: https://t.co/IvNjW1vVUd

If you have to Bear Down and hibernate make sure you do it with family and friends, preferably in a Bears Cave!
🐻⬇️#profootballhof #fordhalloffans #chicagobears pic.twitter.com/bMNgwVsYy5

•   A heads up for anyone who has wanted to get AirPods: they are on a huge sale at Amazon right now. #ad

•   This isn’t a tweet I was expecting to see today:

The #Chiefs immediately released CB Damon Arnette after his arrest Friday night in Las Vegas for assault with a deadly weapon, per source.

•   Arnette wasn’t with the team, as he was was on a reserve/futures contract with the Chiefs. But situations like this make me wonder how a team would react if he was on the active roster. Then again, who would be in Vegas two nights before the AFC Championship Game? And don’t tell me Dennis Rodman, as he doesn’t count because he is not of this planet.

•   MLB’s owners need to get it together and do their part in ending the lockout they put in place so I can go back to fully obsessing over prospects:

•   This has the potential to be interesting: