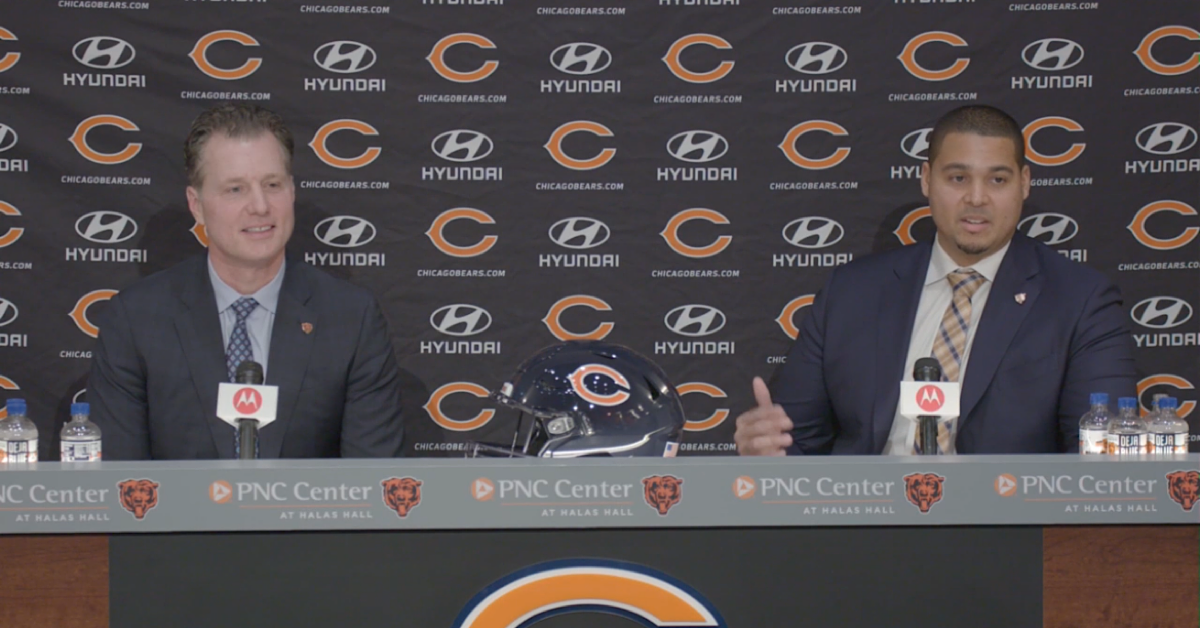 Over the last few years, we’ve spent a lot of time discussing the Chicago Bears as a team in the midst of an identity crisis. We’ve been circling that general idea or concept since 2019. And moving on from that topic is probably why I’m so looking forward to what this new Bears leadership can do with a clean slate.

So while we still won’t know what kind of organization the Bears will be in the near-term (even after internalizing everything below), it remains important to establish goals and parameters at the outset. And I believe that is what GM Ryan Poles and Head Coach Matt Eberflus did on in their introductory press conference on Monday.

One of the biggest failures of the Ryan Pace-Matt Nagy era is that it felt like the team was often trying only to copycat the Saints and Chiefs. To be fair, those are two of the best organizations to mimic, if that’s what you’re going to do. But as Poles mentioned on Monday, no one ever brings to their new team exactly what their old team had. It’s just not possible.

Instead, Poles says he’ll be forging his own path, using what he learned at his previous stop.

All of this seems like Football 101. But after the last four years, I don’t see anything wrong with a back to basics tour from this organization.

Everyone wants young, fast, and physical ballplayers. But speed isn’t valuable when it is the only trait a player possesses. Physicality rules in the NFL, but not when it isn’t playing with discipline. Spending in free agency isn’t something the Bears have had a problem doing in recent years. But spending wisely isn’t something the previous front office did all too well. A lack of self-awareness was one of the downfalls of the last GM-coach tandem. So it was nice for Poles to highlight that being self-aware is something that is on his own radar.

All of the things mentioned above are important in the team-building process. As is the bounce-back factor, which is something that can’t quite be quantified. And yet, it is part of what Poles wants in a team. Sure, Poles used the words tough and violent, while adding he wants a team that strains and finishes. But he also said one more thing that caught my attention:

“And the other thing is the ability to overcome adversity. That’s one I can bring from Kansas City. There were some seasons, even this one, this year, as well as 2015, where we struggled in the beginning of the season. But guys pulled together. It was more of a problem-solving attitude than it was pointing fingers or getting angry. The ability to overcome adversity is huge.”

The ability to overcome adversity is huge might be the understatement of the year. At minimum, it is the leader in the clubhouse four days into February. Far too often, we’d watch the Bears get down early and look disheveled. An early deficit shouldn’t be seen as a death knell. But there were just too many times where it felt like that’s exactly what it was for this team. I’m unsure how Poles plans on instilling resiliency in his team, but at least he has experiences to draw from his time in Kansas City. All hands on deck!

“Building the Offense Around the Quarterback”

My first impression of Eberflus was one that made me feel like he wasn’t going to be some transcendent quote machine. And while that might not make for the most fun from a content creation perspective, I can still appreciate when a coach says things in a matter-of-fact manner.

Like when Eberflus was discussing his vision for the offense.

“We’re building the offense around the quarterback, and that’s what you do,” Eberflus said. “You start with the running game and build the pass concepts off what he can do well. Let’s do that, and then let’s grow, and grow, and grow. … You got to be creative on offense.”

“We want an attacking effort-based offense that has great mental focus and intensity and we’re going to measure every single one of those. Obviously, taking care of the ball is the most important thing and then being smart in their situations, being smart, pre-snap, post-snap and understanding the game of football. And it’s our job as coaches to educate that. So in terms of like philosophy of offense, sure, I want an attacking style, scoring points, protecting the football.”

On the one hand, Eberflus states the obvious, checking the boxes of scoring points, protecting the football, and playing with intensity. But he also underscores the importance of intelligence. Playing smart situational football is a major key. One the Bears haven’t really locked in over the last few years.

Even if we can’t agree on which offensive scheme we’d like to see the Bears run, one thing we can agree on is that this team needs to be better pre-snap and post-snap. Watching so many pre-snap penalties putting the Bears behind the sticks became grating. And hearing whistles after silly, unnecessary penalties had us bugging, too. Clean those things up, and give the offense more of a fighting chance.