Is Today Hester's Big Day? Here Come the Coordinators, Staff Expansion for Eberflus, and Other Bears Bullets Skip to content 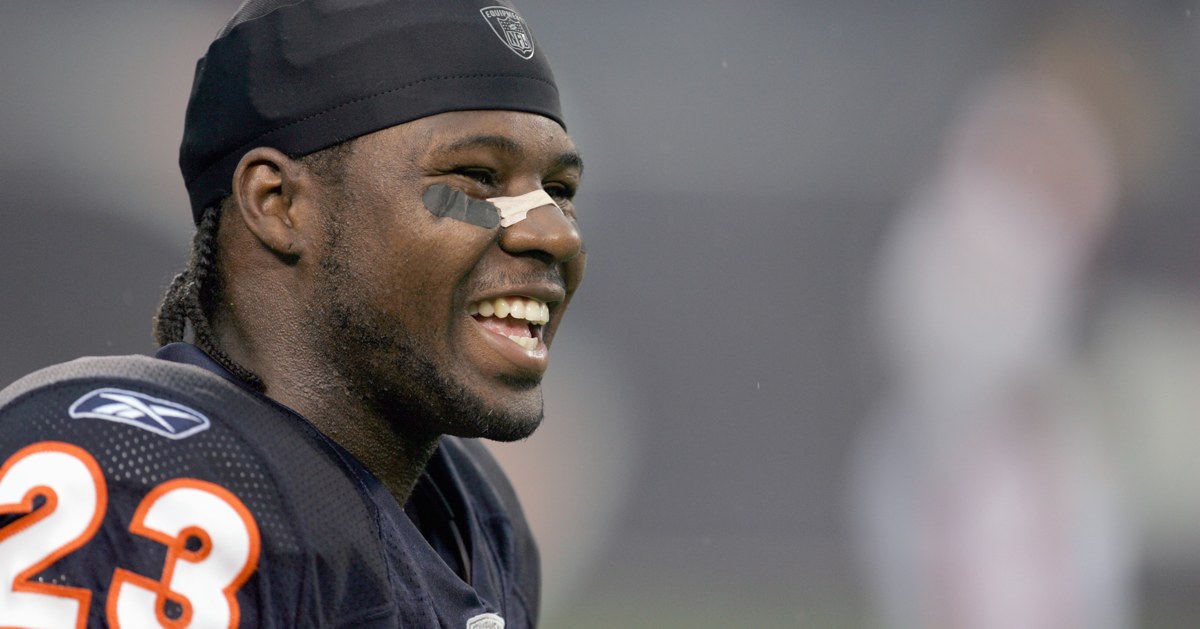 It’s a big day for my music brain:

Kanye West’s\ The College Dropout was a game-changing album for me. It altered how and what type of music I would listen to moving forward. Dropout also put me in touch with new thoughts and feelings I never had before while listening to music. And it made me want to dig into classic tracks, which did wonders in expanding my musical horizons.

Anyone got a favorite track that they’re willing to share with the class?

•   In addition to it being a big day for my music brain, it could be a big one for Devin Hester. The Greatest Return Specialist to Ever Do It is one of the 15 finalists for the Pro Football Hall of Fame. That museum in Canton, Ohio honoring the legends of football will get up to five new members. Hester should be one of them, but special teams aces aren’t as well-represented as other position groups. Ideally, Hester (1) bucks that trend by getting in on the first ballot and (2) opens the door for others.

•   Colleen Kane (Tribune) runs down the most memorable plays of Hester’s career with the Bears. You’ll want to clear some time in your day for that one.

•   And it’s about to be momentous occasion at Halas Hall, too:

•   Matt Eberflus’ coordinators will speak with the Chicago media for the first time since joining the team. Obviously, there will be questions about developing Justin Fields. But what else do you want to hear from the coaches? After all, football is a game of three phases working together for a common goal.

•   I’d like to hear Special Teams Coordinator Richard Hightower discuss how he can help maintain Chicago’s recent run of excellence. Coaching special teams is a challenge with the constant turnover of players in that phase. What did Defensive Coordinator Alan Williams learn from the last time he was a play-caller. Will Offensive Coordinator Luke Getsy share his philosophy on building an offense beyond the quarterback?

•   ICYMI: The Bears brought in a new running backs coach, hiring David Walker to work with David Montgomery and the gang. Walker left coaching in 2019, but returns after taking time off to deal with family business. This story by Joel A. Erickson (Indy Star) from 2020shines light on how Walker was spending his time after leaving the coaching game. And his explanation as to why he left in 2019 is touching:

“My wife had a health incident earlier that season, and as she worked through that and we worked through that as a family, I needed to be more present to help her get through her stuff and help her family get through it,” Walker said. “That was the main reason behind making that decision.” Walker declined to say any more about the health issue his wife, Marilin, battled, preferring to keep it private, saying only that she’s doing great now.

•   Some things are bigger than football, and family is one of them. With that being said, I find it encouraging that Walker had the gumption to put football aside to deal with family matters. Moving forward, I’d like to think Walker and his family situation are in a much better and more stable situation. Welcome back to the game, coach.

•   In addition to Walker, the Bears were able to add a pair of additional offensive assistants to the staff on Wednesday. Fittingly enough, both have ties to the Packers. Tim Zetts joins the Bears as their Assistant Tight Ends Coach. The Bears didn’t have an assistant to their TEs coach last year, so this is an entirely new position for the team. And I am all for expanding those coaching and front office staffs when possible. Zetts was an Offensive Quality Control Coach with Green Bay last year. Omar Young also has Packers connections, coaching with the team in 2017-18. Young has spent the last three years coaching offense at Eastern Illinois. He jumps on board with an Offensive Quality Control Coach title in Chicago.

•   No longer listed on the staff is Henry Burris, who was an Offensive Quality Control coach last season. Previously, Burris joined the Bears as a Bill Walsh Diversity Fellowship recipient in 2020 before getting a full-time promotion a year later. The Bears did well during Matt Nagy’s time in Chicago hiring and promoting coaches through the Walsh Diversity Fellowship. Hopefully, Matt Eberflus can follow that lead.

•   Speaking of names no longer showing up on the Bears’ official website, it looks like the Bears need a new cap guy and lead negotiator:

Joey Laine, the Bears' chief negotiator under Ryan Pace, has been removed from the website. He was on there as recently as yesterday.

•   I’m sure the Bears have in-house options. And I suppose Cliff Stein, who currently has a SVP and General Counsel title with the Bears and handled those duties long before Joey Laine’s arrival, could do so in a pinch. But moving forward, GM Ryan Poles should find himself a “cap guy” who can navigate those murky waters and put this team in a happy place when it comes to cap handling.

•   If you are looking for Super Bowl betting promos, we’re gathering them all here. This is basically the biggest time of year to get the promos, so if you’re into it at all, make sure to check it out. For example, the FanDuel Super Bowl promo code brings 56-1 odds on the Rams or Bengals to win this year’s big game. New players can deposit $10 and bet $5 on the winning team. Correct bets will return a $280 cash payout.

•   Please make Super Bowl logos fun again. It’s almost as if they stopped trying after Super Bowl XLIV, did a little bit of work for Super Bowl 50, but went back to not caring with Super Bowl LI:

You can spot the exact moment the NFL turned to the boring corporate logo 👎 pic.twitter.com/qGZWhFvN4N

•   Is this a wrestling bit? Or something more…

The fact checking standard for @ProFootballTalk reporting is far lower than that of @AEW’s roving reporter @tonyschiavone24. I’m definitely not running for Congress; this filing is faker than Eddie Gilbert’s apology to Tommy Rich in 1984. PFT sources as trustworthy as @The_MJF. https://t.co/HPdU53GrfY

•   Never did I ever believe I’d see this collection of words in a sentence, let alone as the peg of a story:

Washington Commanders DT Jonathan Allen apologized for tweeting that he’d like to have dinner with Adolf Hitler:https://t.co/GSdMyA9ZiA

•   I love it when these work, as they did with the Bulls last night:

•   The NBA Trade Deadline is TODAY, and you can follow our Bulls coverage is here. When healthy, the Bulls are a good team with the potential to reach the Conference Finals. But they haven’t been healthy lately, which has led to polarizing thoughts when it comes to figuring out what they should do ahead of today’s deadline to cut a deal. But if the Artūras Karnišovas-Marc Eversley front office has taught us anything, it is that if there is a willingness to get a deal done, they’ll do it. And if there isn’t, they won’t make a move just for the sake of it. The front office has earned our trust. Hopefully, the Bears’ front office will earn that benefit of the doubt soon.