Super Bowl LVI: Preview, Predictions, and Everything You Need to Know Skip to content

The two-week wait between the conference championship games and Super Bowl Sunday has got to be the longest two weeks ever, right? Well, there’s the wait from Christmas to Spring Training, which is probably my least favorite. Or the current wait between Christmas and whenever a new CBA is struck, but I digress. Either way, the wait is over!

Super Bowl Sunday has always been a holiday in my life. It’s all amazing, from the re-watch of the classic Super Bowls on NFL Network at the crack of dawn to the pregame show in the afternoon. The nostalgia and excitement never really fade. So, with that being said, Happy Super Bowl Sunday to you and yours! Let’s get into the action.

#SuperBowl week is HERE and @FINALLEVEL is getting us set for the big game!#RamsHouse vs. #RuleItAll on NBC and @peacockTV pic.twitter.com/uEqtSW2l0O

I asked my sister the other day, “what are you doing for the Super Bowl?”

She replied, “You mean the concert!?”

Even non-football diehards will be tuning in to watch one of the greatest spectacles in the entertainment industry, the Super Bowl Halftime Show, and this year it’s going to be a smash for anyone who grew up in the “Millennials” (Age 26-41) generation. Dr. Dre, Eminem, Snoop Dogg, Mary J. Blige, and Kendrick Lamar will headline the first-ever all hip hop themed halftime show on Sunday, and boy, let me tell ya, I’m pumped for it! My kids are about to learn some things about their parents on Sunday.

I’m extremely excited to share the stage with my friends for the #PepsiHalftime Show.

This will introduce the next saga of my career…

Joe Burrow and the Bengals have defied the odds all season long, and Sunday will be no different if Cincinnati wins their first Super Bowl ever. The Los Angeles Rams boast a fearsome stable of pass rushers led by Aaron Donald, who finished the season with a 93.6 PFF grade. The Bengals’ offensive line is less than stellar, and they’ve allowed 26 percent of pressures on Joe Burrow to be converted to sacks this season.

But, and this is a big but, Joe Burrow has been lethal when the opposing defense tries to create pressures via blitzes. Burrow owns a league-best 93.0 PFF passing grade against the blitz. So, if Los Angeles plans on wrecking the Bengals game plan by putting pressure on Joe Burrow, it’s going to have to be done with their pass rushers beating their man on non-blitz plays.

If the Bengals win this one, they will have to do two crucial things; beat the Rams through the air, and create takeaways. Luckily for the Bengals, those two things have carried them to the Super Bowl.

The Rams run defense has been stellar this season, allowing 3.9 yards per attempt (4th), 1.0 yards before contact per attempt (2nd), 2.6 yards after contact per attempt (4th), and a 10.6 percent explosive run play allowed rate (7th). So, expect the Bengals to win this one through the air. In the deep game, Joe Burrow and Ja’Marr Chase have been unstoppable, and Tee Higgins has been excellent in the playoffs this year. C.J. Uzomah, who sprained his MCL in the AFC Championship, will also be playing on Sunday. Lastly, let’s not forget that Tyler Boyd had ZERO drops on 99 targets this season. He’s got hands for days. Joe Burrow has plenty of weapons at his disposal on Sunday.

The Bengals defense has had a knack for creating timely turnovers during their run through the playoffs, and they’ll have to steal some possessions from the Rams on Sunday if they hope to finish the job.

One more thing to pay attention to is Joe Burrow’s feet. Burrow looked like a magician scrambling for first downs while under pressure against the Kansas City Cheifs, running for at least three first downs on third down that saved the game. Burrow will need to use his feet and awareness to survive the Rams pressure.

The Rams might be the favorite in this one, but Joe Burrow does not care.

Sean McVay gets a lot of love for what he’s done with the Los Angeles Rams, and for a good reason. I mean, this is his second Super Bowl appearance in the last four years. But, McVay was taken to school the first time around when Bill Belichick put on a masterclass in game management and play-calling. Has McVay learned from his mistakes? We’ll find out, but if you ask me, Rams fans better hope that McVay’s performance in the NFC Championship game was any indication of that answer; it’s a no.

Even so, the Rams come into this one with a similar recipe for success as the Cincinnati Bengals this postseason; and that’s their passing attack. Cam Akers has run the ball 59 times for 154 yards in three playoff games. Akers averages 2.6 yards per attempt and 2.3 yards after contact per attempt, so the Rams have leaned heavily upon their first-year (veteran) quarterback, Matthew Stafford, and his two big weapons in Cooper Kupp and Odell Beckham Jr.

Can the Bengals mediocre stable of corners (Mike Hilton, Eli Apple, and Chidobe Awuzie) slow down the Rams’ passing attack? Probably not. Their best hope is to contain them long enough to create the timely takeaways that they’ve leaned on in the postseason. The Rams will get theirs in the passing game, and the Bengals have been particularly cruddy against slot receivers this year, so maybe it’s Van Jefferson who has himself the best game out of all of the Rams wideouts? Or, maybe McVay schemes his top dog into that Cincy weakness, like this:

Either way, this game feels like it’s going to be won (or lost) through the air. So, no pressure, Matt. But in all seriousness, this is what the Rams traded all those picks for last offseason, for Matthew Stafford to be the guy under center to get them over the hump.

Of course, their defense will be a huge factor, and the pressure they can create in the Cincinnati backfield will determine their fate on Sunday. If you’re a Rams fan, you like your chances if the deciding factor becomes the performance of guys like Aaron Donald and Von Miller.

Here’s how we here at Bleacher Nation see this one playing out this Sunday! 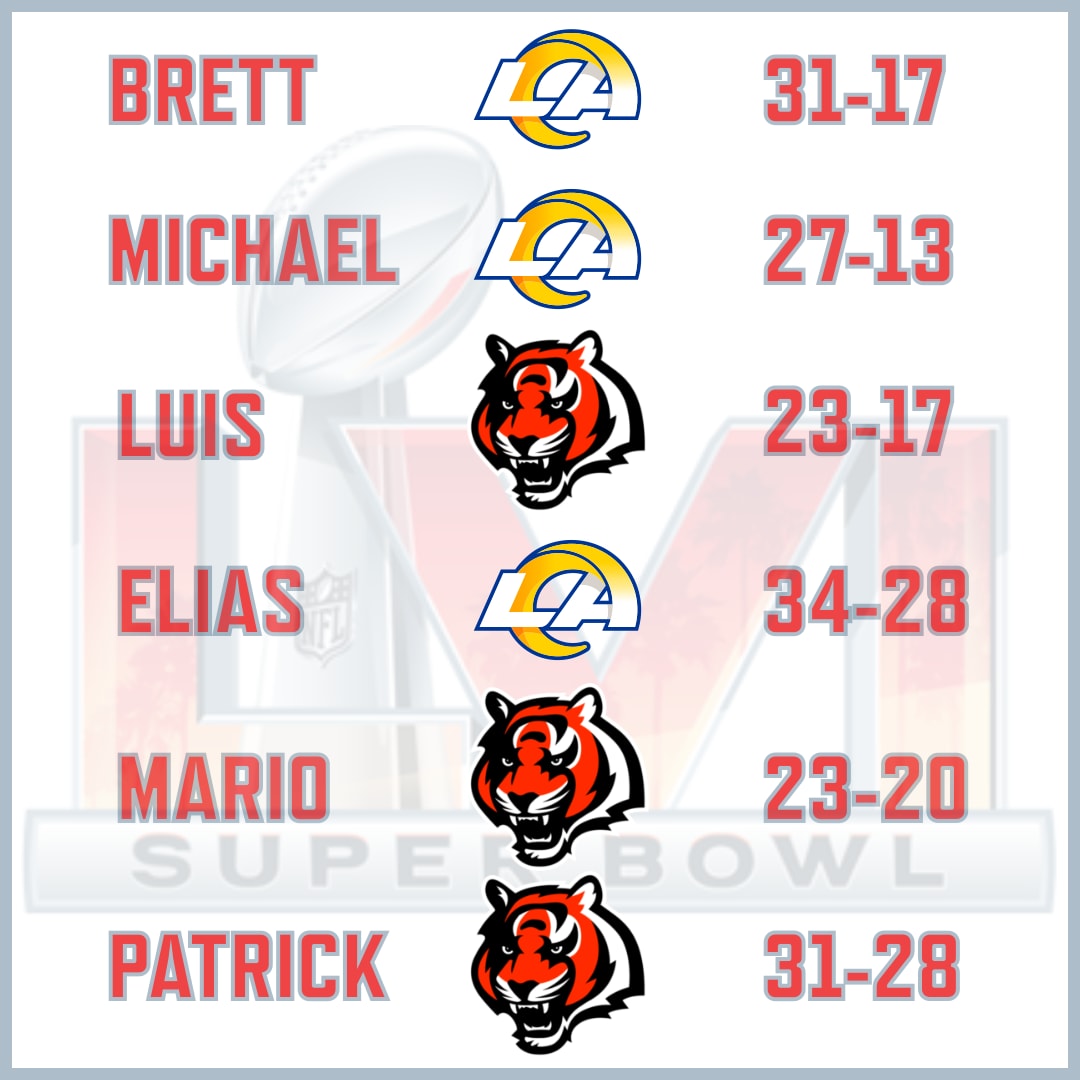