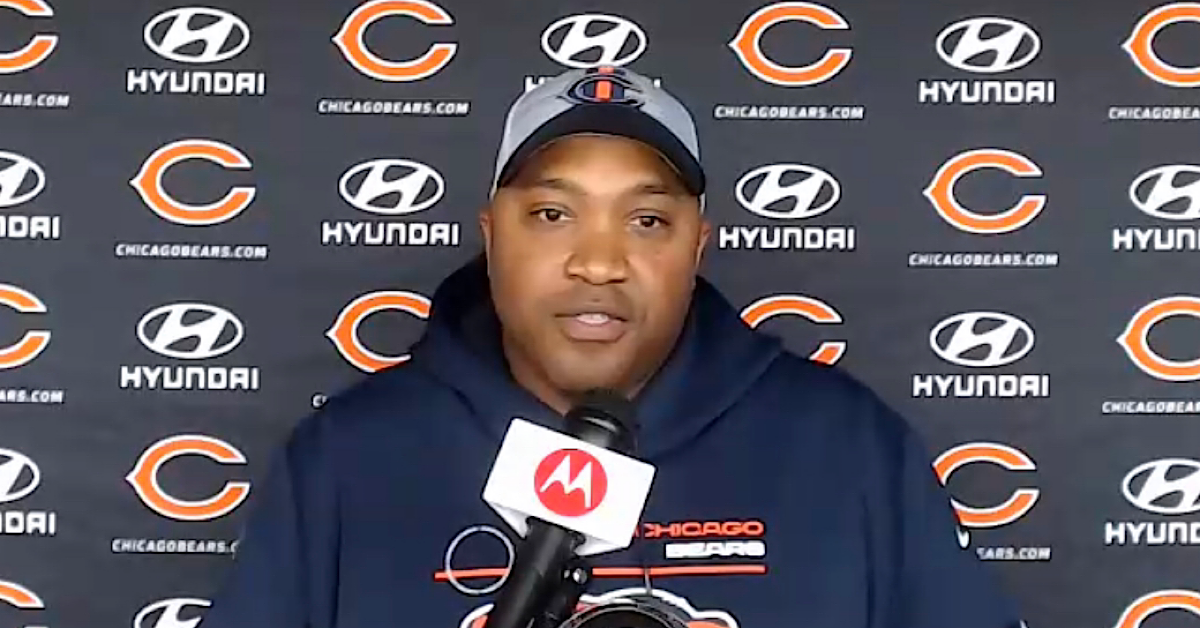 On Thursday, the Chicago Bears had their individual coordinators stand up at the podium to face the media. And while Offensive Coordinator Luke Getsy and Defensive Coordinator Alan Williams both held highly anticipated pressers, let’s not look past Special Teams Coordinator Richard Hightower.

Hightower, 41, takes over a position group that was getting better each year under Chris Tabor. But with Tabor gone to Carolina, it is up to Hightower to keep the good times rolling. Special teams can be a sticky subject for Bears fans. However, Hightower, who was calling the special teams shots in San Francisco since the start of the 2017 season, could be the right guy for the job.

Not only did Hightower speak on Thursday, he also held court with the Bears’ Larry Mayer to discuss things. We’ve pulled some highlights, adding commentary for perspective and depth. Enjoy!

We’ve spent a hearty chunk of time the last few years discussing an offense that didn’t have an identity. However, we didn’t have that problem on defense. But when it came to special teams, the Bears were a team with a growing identity. To be more exact, that third phase was a unit that had to shake off its dark past to get to a better place. To Chris Tabor’s credit, the special teams unit did that by getting better each year. But what is the new guy looking for?

“I want them to look like a group that plays with high intensity, high effort. I want them to play penalty-free. Obviously, we realize penalties are going to happen. But I want the guys to play with relentless effort. We’re going to be fast, physical and dominating.”

Some of this is obvious stuff, so I don’t want to spill too much virtual ink on it. Every position coach and coordinator wants high intensity, high effort players who are fast, physical, and dominating. But for me, it’s the “penalty-free” mention that grabs my attention. Special teams penalties can so often result in first downs. And while we realize the obvious ones — offsides, running into/roughing the kicker/punter — the ones that annoy me the most might be ones that give up free yards after a change of possession. Few things chap my backside like when a special teams penalty tacks on yards after a return. It’s like giving up a free first down.

Some Pieces in Place

Special teams coaches have tough gigs. You’re basically assembling a unit made up of bits and pieces of every other position group. Making things tougher on a year-to-year basis is that there is often a ton of change among that group’s biggest contributors. For instance, four of the five Bears who played the most special teams snaps last year are set to become free agents. And that’s before we include Jakeem Grant Sr., the Pro Bowl return specialist. In other words, don’t grow too fond of these guys because they might not be here for long.

But, hey, at least Grant wants to be back.

On Ending the Packers’ Season

One of the most frustrating things to happen last year was when the Bears offense found something that was working, and Matt Nagy took the most circuitous route to acknowledge Bill Lazor was responsible for play calling. It was a small thing, but it felt like it spoke volumes about where Nagy was as a coach. To me, it felt like he was trying to make “fetch” happen with his playbook, failed, and didn’t want to credit someone who was able to make chicken salad out of a hodgepodge of gunk. At least, that’s what the optics were in the moment.

With that in mind, I like Hightower’s answer to a question from Mayer about what it was like to be a part of the 49ers’ playoff win against the Packers last January when his special teams unit did so much of the heavy lifting:

New Bears special teams coordinator Richard Hightower spoke of his admiration for Hall of Fame finalist Devin Hester: "In my opinion, first ballot. I mean, he's a stud. … In my opinion, it's a no-brainer. I just hope it happens."

You can just tell #Bears special teams coordinator Richard Hightower is excited to be back in Chicago. A lot of smiles and enthusiasm in his voice.

For more from Hightower, you can watch the full presser below: