Rams Get Their Ring, Walter's Super Moment, Halftime Rocks, Best Playoffs Ever? And Other Bears Bullets Skip to content 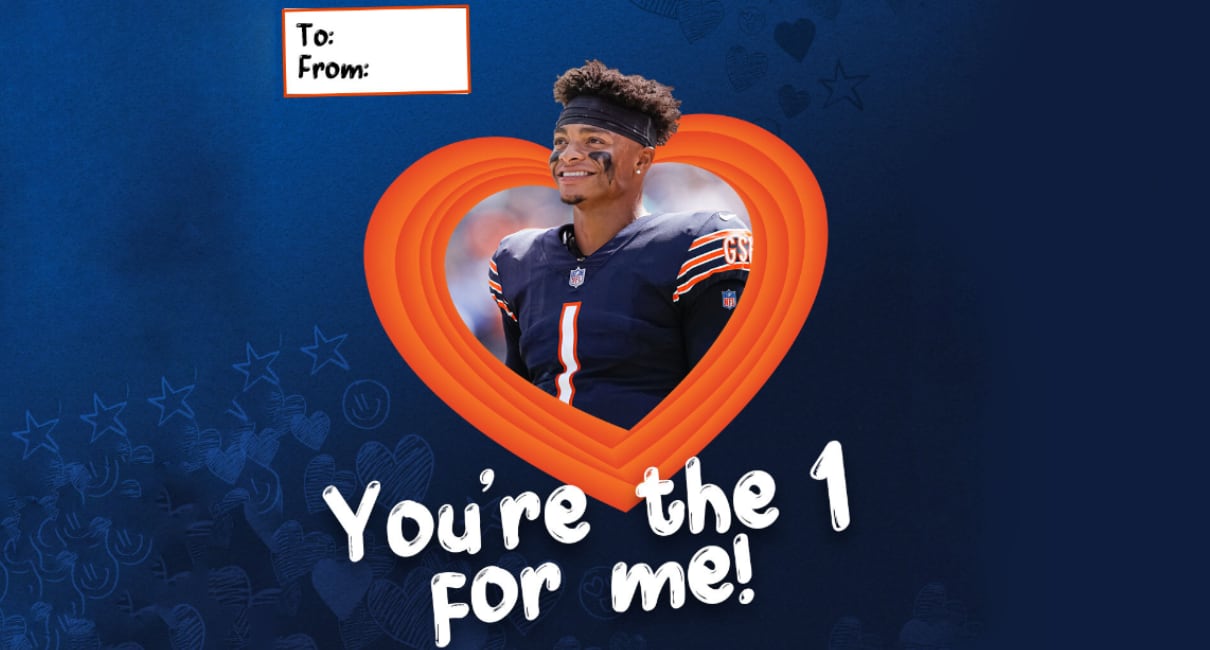 Did you forget about Valentine’s Day? It’s OK. Your favorite football team has you covered:

I, myself, would love to help your cause. After all, I’m a giving kind of guy. But after my kitchen was a bakery for three dozen cookies and a cake this weekend, I’m closing up shop for a bit.

•   Los Angeles has seen three championship-winning teams since the start of 2020. However, the Rams’ 23-20 win against the Bengals in Super Bowl LVI was the only one that won’t come with some sort of asterisk. This wasn’t the Lakers winning the NBA title in a Mickey Mouse bubble. Or the Dodgers taking the World Series crown in a hastily put-together 60-game season. Instead, in what was the biggest (literally) season the NFL has ever offered, it was the Rams winning it all. Say what you want about the Rams, but at least they’re not the Packers!

•   Of course, this game wasn’t without its controversy:

The officials were determined to ignore every violation when the ball was in play and only call false starts, delay of game and taunting. They maintained that posture for 58 minutes and 39 seconds. Then they started officiating. That was bad. https://t.co/AmmPbmlxqu

•   In what was representative of far too many football games we’ve seen over the years, NFL officials find a way to become prominent figures in high-leverage moments after being mostly quiet throughout the game. Part of me is surprised to see Tony Dungy opine strongly against the late-game calls. Dungy doesn’t tend to have strong opinions on these matters, so you know it really stung him.

•   Packers All-Pro linebacker De’Vondre Campbell had some thoughts about one game-changing call:

Im gonna say this and I don’t care what anybody thinks. That was NOT pass interference against Logan Wilson on the goal line that was a great play against a really good football player but for some reason people automatically assume that an LB vs a WR is an automatic mismatch

WHICH WE ARE ALLOWED TO DO the ball was thrown slightly behind and Wilson made a great play point blank period. That was the biggest play in that entire game last night and I firmly believe that if they don’t make that terrible call the Bengals win the Super Bowl

•   The guy might play for a rival, but he makes some compelling points. There are few things that bug me like when an official throws a flag because they think there is a penalty because there is a perception of a positional mismatch, like what Campbell references when a linebacker is trying to cover a receiver. I guess it serves as a reminder that our eyes can be deceitful. Moreover, I can’t help but wonder if a moment like that could nudge more defensive players to switch up numbers. Let’s be honest with each other. There is a non-zero chance that flag isn’t thrown if a number that isn’t 55 is covering a guy wearing 10. Can’t hurt, could help.

•   Then again, I do want to be clear about the officiating situation. Officials did miss a blatant OPI call on a Tee Higgins touchdown. But Jalen Ramsey got away with some handsy stuff earlier if you were watching that broadcast closely. Gotta call it both ways.

•   On a broadcast that was mostly fine, I think NBC whiffed in not having its rules expert/former NFL official weigh in on some of these close calls. It would’ve been a good look to offer that particular perspective more often in the biggest game of the year. Just a thought.

•   Even though the Bears were nowhere to be found during the postseason, this was an epic run by the NFL:

•   The Bears had me wanting to throw on the pads and hit something last night:

•   There will be ample chatter about team building this offseason. And the Rams’ high-profile acquisitions of Matthew Stafford, Odell Beckham Jr., Jalen Ramsey, and Von Miller gave the illusion that the Super Bowl champs were willing to risk it all without a care for draft capital. However, FiveThirtyEight’s Josh Hermsmeyer underscores how they wouldn’t be lifting the Lombardi if it weren’t for home-grown studs such as Cooper Kupp (3rd round pick in 2017) and Aaron Donald (first-run pick in 2016).

•   Draft picks matter. How you use them matters, too. Despite the perception of the Rams not having draft capital after selling off early round picks like they were going out of style, let’s point out how L.A. had nine selections in 2021, nine more in 2020, and eight in 2019 (when the team began this trend of going all-in). Oh … and they project to have eight more selections in the 2022 NFL Draft. The Bears, who have been pushing all their chips to the table in the same time-frame, haven’t had a draft class with eight or nine selections. Again, it’s not about Chicago’s football team spending money or draft capital. Instead, it’s been about the management of those assets. Or, more accurately, the mismanagement of those things. Thankfully, there is a new sheriff in town. And his name is Ryan Poles.

•   These dudes are special:

One of the greatest individual seasons ever.

•   I can’t believe Donald is contemplating retirement, but that was the vibe he was giving NBC’s Rodney Harrison — which was relayed on the network’s pre-game show.

•   Joe Burrow is a real one, and I hope he gets back to the big game:

•   Hopefully, Justin Fields’ next Super Bowl trip involves him and his teammates on the field:

You know me I’m always going to find QB1 pic.twitter.com/jfyvzgFyEn

•   It was 36 years in the making, but Walter Payton finally got int the end zone on Super Bowl Sunday:

Seeing Walter Payton at the end of this commercial brought a tear to my eye. #SuperBowl #Sweetness #DaBears  🐻⬇️ pic.twitter.com/cm6TU4jSbs

•   So much so, the Bengals kicker skipped out on halftime meetings to watch:

McPherson staying on the field to watch the half time show is awesome haha pic.twitter.com/Nhp3RDMMJG

•   My favorite music moment during the halftime show was Dr. Dre looping the beat for his classic production “No Diggity” on the piano as he went into “Still D.R.E.” — which is an iconic track in its own right. There is something about music that really ties everything together.

•   On the other end of the spectrum, my least favorite moment was when the thought crossed my mind that the first big music event at So-Fi Stadium was supposed to be Taylor Swift’s Loverfest. In fact, that extravaganza was supposed to be the first big event at that joint. But, hey, it can happen in the future. Just as a Dr. Dre, Eminem, Snoop Dogg tour should be born out of last night’s halftime show. Music fans deserve that much!

•   Part of me can’t believe the NFL thought that Dr. Dre and Eminem — who are known for thumbing their nose in the face of authority figures — actually thought those two would abide by the league’s attempt at watering down the music and the moment. The New York Times has a hefty halftime show review.

•   As you can tell by our look-ahead to the offseason post, the football season really doesn’t stop. In fact, it’s almost as if the NFL goes out of its way to ensure there is one major football event happening in each month of the calendar year. Nevertheless, it’s a slow-down of on-the-field happenings. With that in mind, I’d encourage you to rock with our friends at BN Bulls, check in with BN Blackhawks, and pop in on what’s happening with the MLB owners at the O.G. Bleacher Nation site.

•   Shout out to Mario for nailing the pick and correct score:

Wow! Can’t believe I got both the score AND the team correct!#SuperBowl pic.twitter.com/NpEF4VZdME